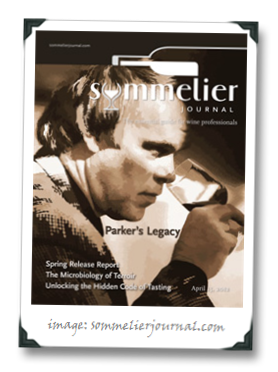 Though certainly at what many would consider well-deserved retirement age (he turns 65 this year), Robert Parker – still the single most influential critic of any kind in the world – is not retiring any time soon.

If you’ve read the interview with Parker by sommelier David D. Denton in the April 15, 2012 issue of Sommelier Journal, you already know that Parker has called the rumor of his retirement “totally not true.”

You’d also know that he has critical words for overzealous followers of fresh produce in the restaurant world (“I don’t need the entire history of the vegetable from the time it was planted to the time it was harvested”), fervently believes that former Wine Advocate contributor Jay Miller and MW Pancho Campo are innocent of any pay-to-play wrong-doing (“this guy Jim Budd seems to have something against him, and I don’t know what goes on there” – he’s apparently lawyered-up and hired an investigative service called Kroll to find out), and that he considers himself the first wine blogger (an interesting comparison that I think was first explored here on the virtual pages of 1WineDude.com during my interview with Parker).

And if you’d read that SJ interview, then you’d also know that Parker reserves his most vitriolic words for author Alice Feiring and her position at the forefront of the crusade to bring natural wines into the public consciousness (links and emphasis mine):

“We don’t promote this, but Beaux Frères [ the Oregon wine producer of which Parker is a co-owner ] is biodynamically farmed, the wines aren’t fined or filtered, and I’d say that for most of the vintages we’ve done to date, we didn’t need to put SO2 on the label because the levels were so low. So when we talk about all these catchphrases like ‘natural wine,’ I can tell you that people like Alice Feiring are charlatans – I think they are no better than the snake-oil salesman of yesterday. They are selling a gimmick. Most wines are natural.”

Think the critic doth protest too much? If you asked me that question, the answer would be “probably, but I’m more concerned with how the rest of us are going to look now”…

On the one hand, the natural wine movement suffers from a terrible name – unless we’re making wine from synthetic grapes, the ingredients that end up in or contributing to the contents of a single bottle of wine are “natural” in the general sense of the word, just as produce is “organic” in that it is made of organic matter (though it may not be legally called Organic unless it meets the criteria for being labeled as such – hey, Kashi, are you listening?!??).

So to some extent, Parker raises a good point: calling a wine natural implies that those wines that do not meet the (inexcusably, in my view) imprecise criteria for being deemed natural by the movement’s purists are somehow un-natural and inferior to those that do. And I can tell you from experience with both (and pretty much everything in-between at this point) that such a dividing line is academic only – plenty of wonderful and gawd-awful examples from both styles of winemaking are available to be drunk.

But calling out Alice as selling snake-oil to an unsuspecting public because she’s become the public figurehead of a different view of winemaking? That comes off as a thinly-veiled salvo. Not that I don’t understand the probable motive – Alice did, after all, use Parker’s name in terms of an already-established wine world catch-phrase (“Parkerization”) that represented everything she loathes about the current state of the wine world… in the title of one of her books. That kind of move would probably make me a bit raw, too, even if I found the internal fortitude to admire the ballsy-ness required to do it. But the bottom line is that it is petty to offer eye-for-an-eye, blow-for-blow retaliation in kind, and Parker’s comment about Feiring fails the common sense test for me of not being at least somewhat retaliatory.

What I primarily took away from Parker’s SJ interview was that we now have yet another example of the U.S. wine world’s elder statespersons behaving badly – even if it does only constitute a tiny percentage of the overall article; Parker doesn’t do that many interviews, so the small amount of it that stinks like one of the poorer examples of natural wines is unfortunately going to have resonance in and about the wine world. If anyone in the wine biz has taken to sitting and wonder why the rest of the world thinks that we’re a bunch of douchebags, you have one more example to throw on the fires of your poignant internal angst.

I may be much more “inside” that wine world than “outside” of it these days, but I’m still enough of a regular ol’ passionate wine geek at heart to be saddened by this slip of vitriol. Feiring is no more responsible for all horse-sweaty, undrinkable juice than Parker is for all over-extracted, boozy Frankenwines, than George Lukas is responsible for every sucky effects-laden film that came out since Star Wars (ok, minus the SW prequels). Oversimplifying the attacks on their stances into attacks on them personally ignores crucial positive developments in the wine world that they’ve helped to spearhead (Parker’s being an overall increase in wine quality globally, Feiring’s a renewed focus for everyday wine fans to consciously consider exactly what ingredients they’re actually putting in their mouths).

Sorry, but I don’t accept “an eye for an eye” justice as a standard.

We’re better than this, people – and the folks coming to us for wine advice certainly deserve better than the airing of dirty laundry that has become the standard means of communication between some of the wines world’s best-known names when “discussing” divisive topics (here’s some free advice: stick to e-mail; or better yet, stop taking your model of progressive discourse from the current U.S. Congress).