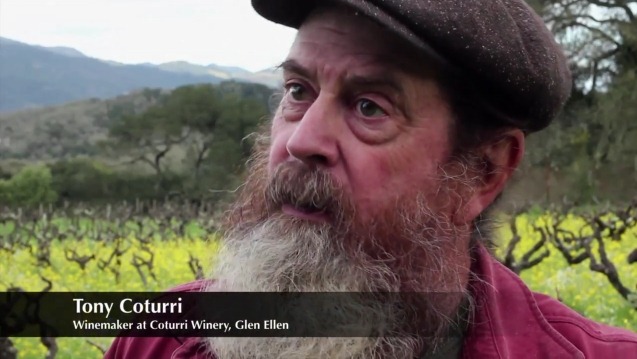 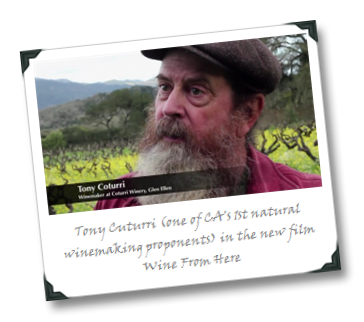 The leakiest of those tenets? The notion that natural winemaking is the most accurate lightening rod for transmitting a sense of place. Wine From Here begins its dénouement with a blind tasting of natural CA wines with experts and CA natural winemakers. It’s one of the dramatic low points of the film, which is a shame because the results of the tasting are themselves fairly dramatic; as summarized by the film’s narrator:

“…Only sometimes could they correctly identify the grapes or some detail of the winemaking methods; and not one could identify the specific terroir in California.”

While the above result will come as no surprise to anyone who has ever taken part in a blind tasting of wines, it undercuts the message delivered by several of the interviewees in the film that natural winemaking is a more reliable delivery service than UPS when it comes to bringing you a sense of place in a wine.

Wine From Here does a pretty good job of balancing the various sides of natural winemaking story in CA, including not shying away from the thorny topic of how environmental friendliness (another claim widely espoused by organic grape growers and natural winemakers) should be measured. Jared Brandt, winemaker at A Donkey and Goat, puts it best in his interview when he recalls a conversation with a former French employer, who noted that after converting to Biodynamics “his diesel usage went up ten times… is using ten times as much diesel worse on the environment than using RoundUp? I don’t think it’s as clear-cut as people think it is.”

Far more interesting to me, and I think a tactic ultimately more likely for success, are the comparisons made in the film between natural winemaking and natural foods. Long-standing godfather of CA natural wine Tony Coturri talks up this food angle, as does Alice Feiring, and it’s a strong one. If you demand that your food be processed as little as possible, then as a consumer don’t you have the right to demand the same thing from your wines?

My bud Hardy Wallace, in talking about the winemaking at his former employer the Natural Process Alliance in Santa Rosa (whose cloudy Sauvignon Blanc is a tasty, joyous, visceral experience, by the way), I thought summed up the thinking behind this comparison best during one of his interviews in Wine From Here:

“Our goal is to do nothing [to the wine]; so if we have to do anything, we want to do as little as possible.”

The corollary of course being that much of the wine you’re drinking is having something done to it, and in many cases it’s having a sh*tload of stuff done to it, none of which you probably know anything about and certainly some of which you’d rather go without putting in your mouth if you did know it was in there.

Wine From Here isn’t perfect, but if you’re a fine wine geek then it sure as hell ought to get you thinking about how and why wine production, in its pursuit of “perfection,” often turns more into craft and recipe-following than it does into genuine artistic expression.

8 thoughts on “Square Strawberries: Distilling The Natural Wine Message From The New Film “Wines From Here” (Score A Discount To The L.A. Screening!)”