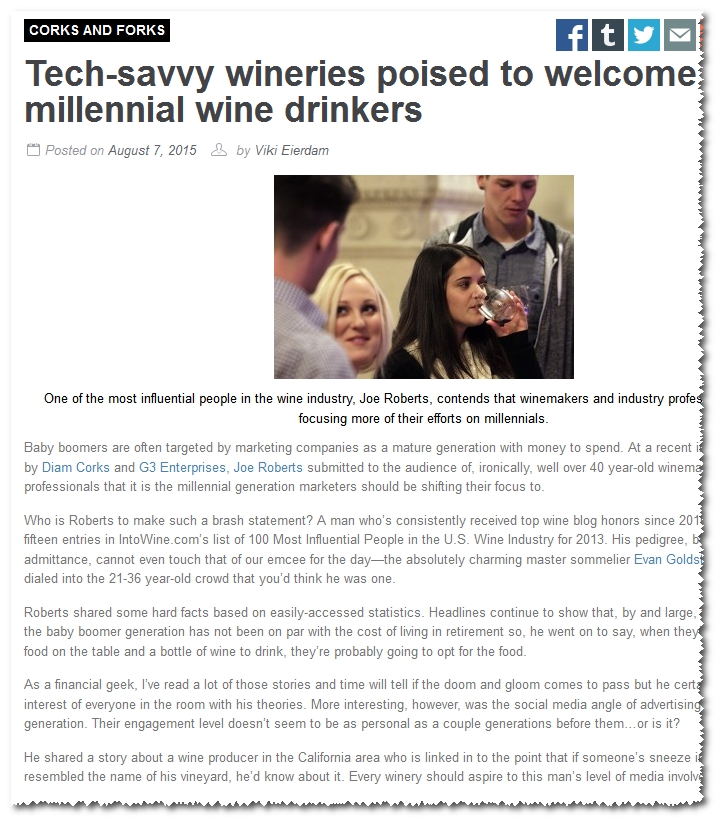 One of the speaking engagements for which I was hired earlier this Summer was recently given a write-up in the Corks And Forks section of The Columbian’s website.

While I am flattered at the positive mention, I thought it worthwhile (because, hey, I need to kill time until it’s 4:30pm and I can drink wine without feeling too bad about it) to expand on a couple of things that author Viki Eierdam discusses in that write-up.

First, I am stoked that she picked up on something that I often mention during these talks, particularly when given to those who work inside of the wine biz…

Here’s the quote from the article on which we’ll zero-in for the moment:

“His pedigree, by his own admittance, cannot even touch that of our emcee for the day—the absolutely charming master sommelier Evan Goldstein—and yet he’s so dialed into the 21-36 year-old crowd that you’d think he was one.”

First, a shout out to my Millennial friends, who have greatly influenced me to the point that people regularly tell me that they think I am seven years younger than I actually am. The truth is that I have not really influenced the Millennials; they have influenced me, considerably, and changed my worldview as a result. If I have any influence on their wine purchasing decisions, it’s because I embraced their cultural gestalt first.

Second, I like to point out that I regularly get hired to speak to people based on my influence in the wine industry, which is way, way, way out of whack with my credentials. I am regularly the least traditionally qualified person in the room when it comes to wine; but I get the gigs anyway, which is a testament to the power of social media with respect to niche topics such as wine.

Finally, I take umbrage (you knew that was coming, right?) with Eierdam’s title for the article. That title implies that wine brands need to be technically savvy in order to employ social media and have success with it. That is, in a word, totally wrong. F*ck, ok, that was two words. Whatever.

Social media has little to do with tech, folks. It has a lot more to do with good customer service. By a factor of about, oh, ten thousand.

Simply because you have to use apps on a computer, tablet, or smartphone to interact with people online in social channels doesn’t change the fact that you are… well… interacting with people.

Do you need to be tech savvy in order to do bookkeeping on your PC? To pay a bill via a bank’s website? To send an email to someone regarding a business transaction? To order movie tickets on your smartphone? To take a survey on the web? To watch a video on YouTube? To play Angry Birds? My seven year old daughter can do a lot of that stuff, and I can assure you that if a part needed to be replaced in one of the PCs in our house, she’d be asking me to do it.

Would you rather know how to delete cache files to help reset your Hootsuite account (tech savvy), or have the customer service chops to turn interactions on the social channels that Hootsuite helps you manage (Twitter… the Book of Face… etc…) into new customers (social savvy)?

I can assure you that while those skills are not mutually exclusive, they are also not interdependent. Don’t fear the tech, folks, fear the opportunity costs of not interacting with the wine drinkers on the other side of that tech.

6 thoughts on “Wine And Social Media: Not Just For The Tech Savvy”