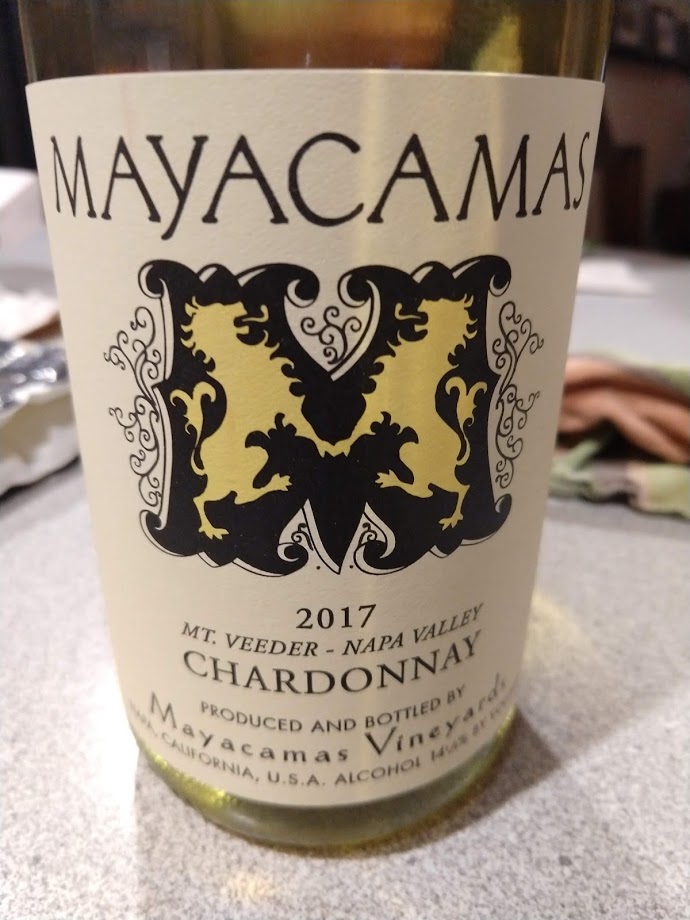 I know that I was supposed to finish up my take on the wine regions of Israel… but a) this is my blog, so I’ll do what I want, and b) I’m so late on that anyway that another week (or two?) won’t matter, right?

The wonderful distraction in this case comes by way of a sample of Mayacamas Vineyards’ stunning 2017 Chardonnay, about which I will type much more in a minute or several. First, it’s worth detailing a bit of the storied history of Mayacamas, older vintages of which may have passed my eager lips at previous points, because it’s both literally and figuratively the stuff of movie scripts.

Maycamas’ winery was built in the late 1800s by a German immigrant who then went bankrupt, and, supposedly, its stone cellar was used to make bootleg wine during Prohibition. The winery’s shadiness had a respite in the `60s, when the Travers family purchased and revitalized it (with deliciously long-lived wines from primo vintages being produced during their tenure), and fame coming in the early 1970s when they were chosen to take part in the famous (or infamous, if you’re French) “Judgment of Paris,” which is the USA’s fine wine equivalent of the Miracle on Ice. In the mid-1990s, Mayacamas became a location-cum-pseudo-character on celluloid, in a romantic dramatic film starring national treasure Keanu Reeves.

Things took a potentially darker turn in the 2000s, when investor Charles Banks purchased Mayacamas for an undisclosed amount; I write “potentially darker” because Banks (with whom I once had dinner, come to think of it) eventually plead guilty to fraud charges and was sentenced to four years in federal prison…

Thankfully, today Mayacamas is in the capable hands of winemakers Andy Erickson and Braiden Albrecht, and viticulturist Phil Coturri, who in combination somehow pulled off this Chardonnay in a vintage that started wet, wet, wet, and ended hot, hot, hot. Mayacamas’ official statement on the result is that they “are very pleased with the overall quality,” which should get a nod for understatement of the year, because this thing is a minor miracle.

More from Mayacamas on the production techniques utilized, for the geekier among you: “Harvested early to retain natural acidity, the grapes were sorted by hand and pressed whole cluster. Alcoholic fermentation was completed in a combination of small barrels (5% new), large format puncheon and stainless steel. Malolactic fermentation was blocked. The wine was aged on the lees for seven months, then twelve months of aging in barrel and an additional six months of aging was done in stainless steel prior to a winter bottling.”

Even for a stalwart producer such as this, there’s something surprising about how damned good things turned out here. At turns it shows racy lemony vibrancy, oyster shell, ripe peaches, and fragrant honeysuckle. The textural tension is, in a word, phenomenal; to the point where one could argue that $50 is actually a bit of a bargain asking price. After nearly two weeks under Savino wine preservation, things got toasty, honeyed, and nutty, in ways that make the prospect of aging this white exciting (I was actually kind of annoyingly giddy when I went back to it, and thankfully video evidence of that doesn’t exist).

Overall, tasting this Chardonnay is like revisiting a favorite read, with that book actually being one of the Great American Novels that lives up to the hype.