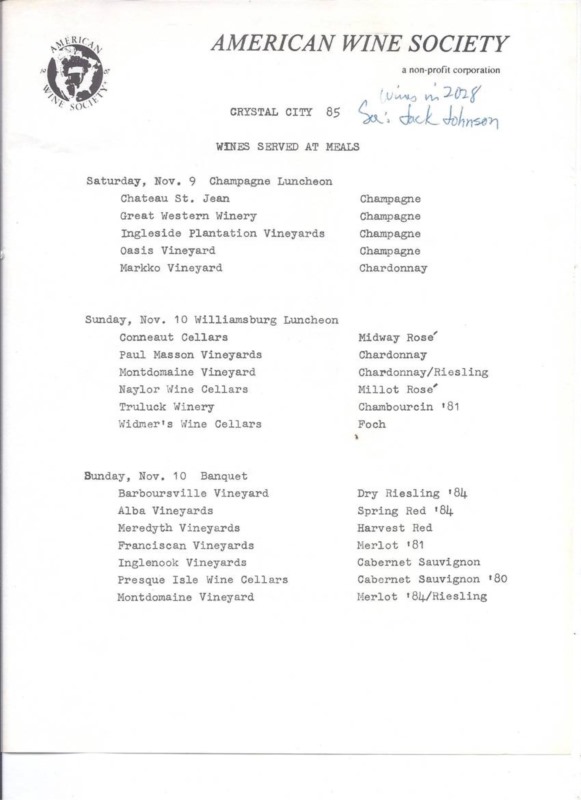 Okay… so… we stirred the pot a bit with last week’s lament on the state of wine writing. To the tune of a couple of hundred overall reactions in comments, emails, and social media.

One of the emails I received was from wine biz alumnus Les Hubbard. Les had happened to read that post, and almost simultaneously (while doing some house cleaning in his files) stumbled upon something nearly thirty years old that he thought was related to the topic of wine writing, and what we can hope to achieve from it (if not being able to achieve green-tinged paper with drawings of previous U.S. presidents on them).

In that email, Les recounted the main themes from a talk on wine writing given by John Frederick Walker in November of 1985 (I would’ve been all of thirteen at that time, and so more qualified to write about orange juice…).

Walker’s themes are eerily resonant today; in fact, they sound as if they could’ve been written last week, let alone twenty-eight years ago. Les gave me permission to share his email, for which I’m quite grateful; I desperately wanted to share them with the 1WD readership, because they feel so pertinent to the craft of wine writing, and because they comprise a fairly awesome exclamation point of sorts to last week’s discussion in the comments section about what it means to be a (underemployed) wine writer.

And so, courtesy of Les, here are Hubbard’s own words paraphrasing what I would consider some of the key points that are still at the heart of good wine scribing, as delivered back in the `80s. So dust off your Jams, Swatches, big-rimmed glasses, skinny ties and Galaga-playing skills and join us for a trip in the dialectical Way Back Machine…

“I had just read Joe Roberts’ November 5th blog… when by coincidence I found an old binder from the 1985 American Wine Society Annual Conference in November of 1985 held in Chrystal City, VA, which was jointly hosted by the groups from Virginia and Maryland. I had introduced John Frederick Walker to do a presentation on wine writing. At the time he was the wine and spirits editor of Food and Wine magazine, a post he had shared with his wife, Elin McCoy since 1980. The Walkers were at the time writing for several national magazines and had a monthly wine column in House Beautiful magazine. Earlier they had been co-authors of the ‘Signet Book of American Wine.’”

“His November 9, 1985 presentation was entitled the ‘Role of the Wine Writer.’ Here are some excerpts from my notes taken that day:

Amen, bruthah! Incidentally, here is a scan of the wine list of what was poured during the conference at which Walker spoke. Check out this lineup (click to embiggen): 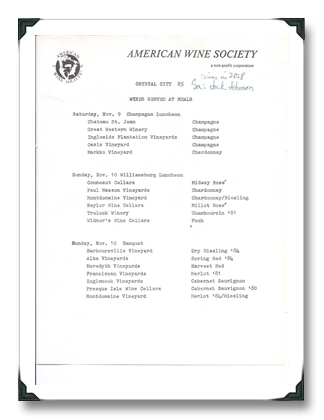 Les went on to add the following tidbit regarding the pouring, which is comically telling from a marketing standpoint:

“When the curtain was lifted we were completely blown away by the Virginia Showcase. First, the wines had been purchased using state promotional funds. Second, the printed literature was not only slick but it extolled the virtues of visiting Virginia wineries. Third, the young ladies, I should say models, pouring the wines employed by the Virginia wine promotion council made [me] pouring for Maryland look pretty shabby.”

I’m not sure we’ve advanced too far from that scenario in the last thirty-some-odd years, from a marketing perspective!

As for how wine writing has changed since then, Les offered some proof that the needle actually has not moved all that far. For starters, wine writing has been in a proliferated state for at least the last twenty-five years; it didn’t explode due to blogging so much as migrate from local periodicals and such to the Internet. And the penchant for wine writers to ignore Walker’s great advice and blame anything and everything on exterior changes like blogging has been with us for at least the same amount of time as Walker’s advice has.

The evidence, to wit: Hubbard also sent me an article by Michael Dresser from The Sun dated December 13, 1987, in which Dresser lamented “…twenty years ago, when wine writers were still less numerous than cockroaches, there was a lot of uncharted territory for the adventurous wine enthusiast to explore… Back then, the few scribblers who covered the field stuck closely to the already-celebrated wine regions of the world… seldom did they venture into the hinterlands.” Dresser was then complaining, quite eloquently, that wine coverage was of lower quantity and higher quality – the exact same complaint levied against the genre today – back in the `60s.

Dresser – an excellent wine writer, by the way (proving that none of us are immune!) – then went on to blame the climbing prices of “hinterland” offerings from Barbaresco and Cote Rotie on expanded media coverage in “books, magazines and newspapers,” writing that “the world’s supply of unknown, underpriced [sic] great wines is dwindling as hordes of wine writers and merchants comb the world looking to ferret out hidden gems.” Sound familiar?

As wine writers, it seems we’ve long been looking to blame some new trend – or one another – for the changing state of affairs in wine distribution/sales/availability/prices/coverage/etc.

Maybe it’s time we just got over it, adapted to the changes instead of railing against them, and tried funneling that angst and energy into fulfilling the promise and potential embedded in Walker’s advice?

4 thoughts on “The Role Of The Blame-Throwing Wine Writer, 1980s Style5 min read”