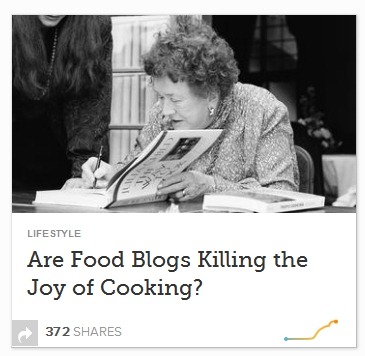 Mashable.com – the über-popular purveys of tech and pop-culture news – recently ran an op-ed style screed by Sandra Garson bemoaning the phenomenon of everyday folks blogging their exploration of food, and in particular, their forays into cooking. In other words, Garson decries the proliferation of food blogs. 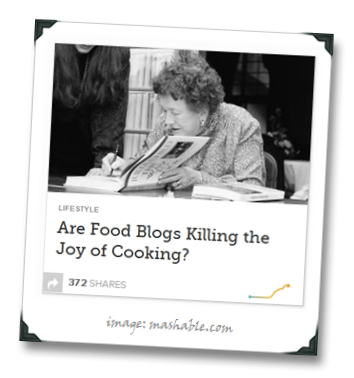 Here’s a snippet of Garson’s article, which I think best sums up her anti-food-blog stance:

“The Internet has made the most important kitchen tool no longer the knife, or the rolling pin, but the camera. If you can’t take stunning, high resolution photographs of your work, you don’t count as a cook. They are indeed stunning photographs: the luscious, carefully styled, pornographic kind. Those photos arouse you. They get your blood racing, your stomach pumping. You are excited and want closure, satisfaction… You want to eat that right now.

Bah, humbug. Those of us who can’t make a dish look so perfectly luscious are probably going to feel inadequate and pass on learning to cook… On full display is how hungry we are to be seductive and to be number one; how obsessed we are by excitement. Sadly, what’s harder to see or taste is the way to cook.”

Garson underscores her points that food blogs are 1) scaring people away from cooking, and b) are too commercialized and self-centered, by contrasting food bloggers (largely made up of consumers and everyday citizens) with… Julia Child.

Which is sort of like comparing the holiday soccer games I play with my friends to the World Cup. Or comparing wine blogs to Gerald Asher (you knew this was coming around to wine, right?).

And so in Mashable’s article we see a reflection of nearly every misapplied criticism that has been levied against wine blogging over the past five years, which we might summarize as “wine blogs are killing the joy of drinking!”…

Which is, to put it bluntly, bullshit.

These arguments against blogging of nearly any stripe – that blogs scare away consumers, confuse the critical landscape, are all in it for free crap and/or money, all suck and should shut down because they cannot produce Pulitzer-winning content, blah, blah, blah – nearly all smell the same and are all nearly equally indefensible.

Because they all miss the central point that BLOGS ARE ALMOST EXCLUSIVELY AUTHORED BY PASSIONATE CONSUMERS. The people authoring 99% of those blogs arethe target market.

Blogs are scaring people away from food? Or wine? Or anything else? Here’s a bet: you show me five people who are scared off from trying wine or cooking because of blogs, and I’ll drink nothing but Crane Lake for a month.

As for the bar being “so damn low” for wine blogs, as Robert Parker recently put it, I’d refer you to an insightful comment left on DrVino.com by Todd Trzaskos:

“In denigrating bloggers, he [ Robert Parker ] denigrates the consumer bases that they speak to…”

I’d add that in denigrating amateur wine blogs, Parker (and whoever levies the same criticisms) also denigrates quite a few of that consumer base directly.

Look, if you killed off all food and wine blogs tomorrow, you’d almost certainly have half the number back within a month, because people want to share their experiences. You cannot stop them from doing that, from communicating around shared passions – food and wine aren’t exempt from that. In fact, just the opposite: they’re uniquely suited to it because they’re inherently social activities. It just happens to be easier to do that – to share passions – now than it has ever been in the history of humankind, hence the proliferation and the continued development (of blogs forming alliances and conferences, increasing the quality of the photography and writing for those who are serious about investing the time required to do so, etc.).

Proliferation and advancement of blogs are inevitable, and essential for the food and wine industry because it means that people are giving a shit about the food and wine industry. Those who would challenge that advancement – often to bolster their own authoritative, ivory-tower positions even at the expense of the larger wine and food industries as a whole – should, at this point, probably just get the hell out of the way.

52 thoughts on “Are Wine Blogs Killing The Joy Of Drinking?3 min read”