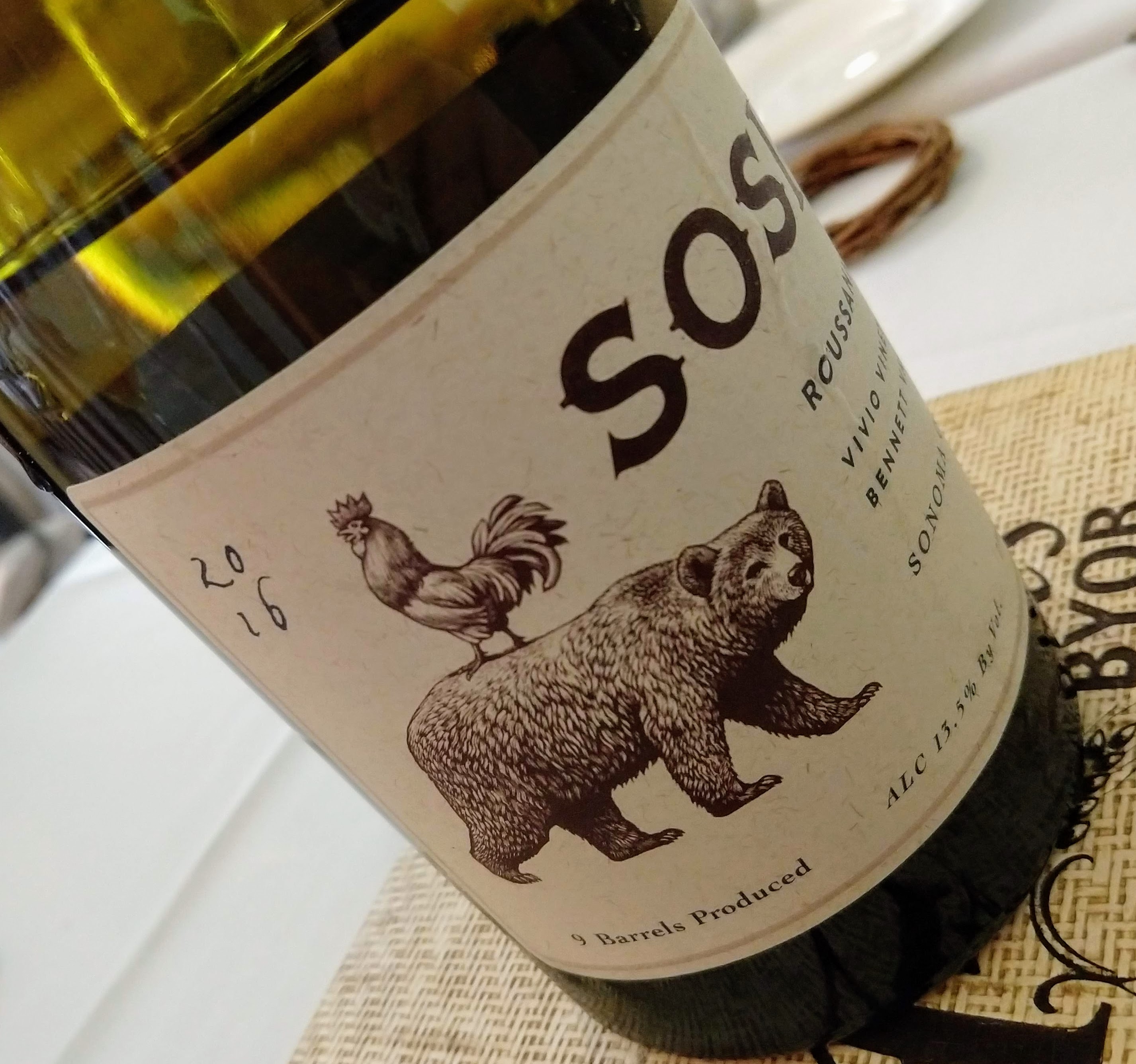 Over the Winter holiday break, I managed to catch up with talented Sonoma-area winemaker and Philly-boy transplant Kieran Robinson, who will soon be opening a tasting room for his wines in the blink-and-you’ll-miss-it one-block section of downtown… Downingtown, PA.

Downingtown is basically my backyard, so I’m very much looking forward to the advent of Robinson’s new digs, and especially to trying to convince him to hire my band for live gigs once the tasting room opens (seriously… I have no shame when it comes to band gigs). But this little blogging vignette isn’t about Robinson’s wines, at least not directly.

Kieran brought along his friend and boss Scott MacFiggen, the main man behind Sosie Wines, and for whom Robinson consults as a winemaker. MacFiggen – who started the Sosie brand after falling in love with French wines in Nuits Saint Georges and falling out of love with the corporate world – has a sort of mutual love-affair with 1WD, and so I was happy to meet and get my grubby lips on more of their Napa-Sonoma-based products.

Sosie is a small outfit – they produce only about 800 cases, and so tend to hy away from the ‘major’ varieties” as MacFiggen puts it. As for Robinson’s decision to consult, he put it this way: “no distributor wants to pick up someone with just one wine; business-wise, that doesn’t work. And you get itches to make new stuff.”

Those itches make for some very satisfying scratches, some of which I’ll attempt to relay in the far less satisfying written word… 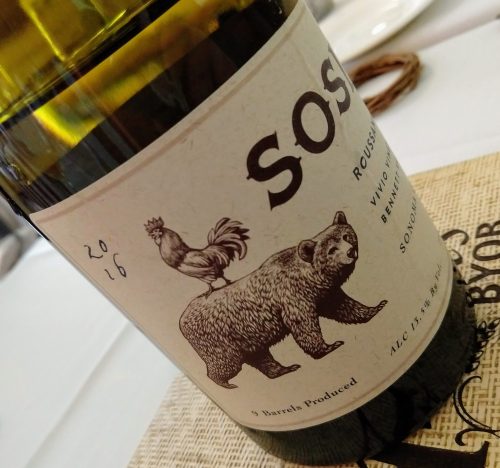 Clocking in at a modest under-14% abv, this is a bit of a rarity for Sonoma Roussane in its lithe, bright profile. “It was about to rain so we had to pick it,” MacFiggen remarked. He summed up the approach to this white as “No amendments – that’s really important to us. We don’t add anything. Sulfer dioxide, that’s it.” That hands-off approach works well here, with textural, toasty, and broad tropical fruit elements mixing in with the lemony acidity and white flower aromas. As is the case with all of Sosie’s wines, the back label is a well-designed (+1 on the font choice, bro!) treatise on the technical aspects of crafting the wine (which means it probably reads like Sanskrit for the average consumer…), as example of which I’ll post here (but will assume the curious are capable of checking out the website for the same details on the other selections).

Roberts road vineyard’s fertile soils produce wines that end up being “a bit too rich” for MacFiggen’s tastes, so they’re dropping it for future releases. Which is a pity, because this all native, 20 percent stem, 50 percent new oak Pinot is a minor wonder. Black tea, deep blackberry like fruit, well developed, spicy tannins with sweet edges… It’s a sexy combination that’s not easy to get when utilizing stem inclusion. “That’s the benefit of the cooler area,” MacFiggen added, “you get longer hang times and riper stems.” Four barrels made, so you hedonists out to grab it while you can.

MacFiggen describes Spring Hill, on the western side of Petaluma, as “right in the edge of being functional. It’s super windy, super wet; I’ve shown up at 11 and couldn’t see the end of the vineyard, it was so foggy. The berries are just minuscule. I call this my Steak Pinot. It’s intense.” Added Robinson: “the soils are non existent, it’s on the brink of being un-growable.” Spicy, earthy, peppery, red and black berries, intense structure, long finish… there’s little (if anything) not to like here. Hints of exotic and citrus fruit, caraway seed, tons of character going on, it’s everything to love about the sort of ‘new California’ Pinot movement. 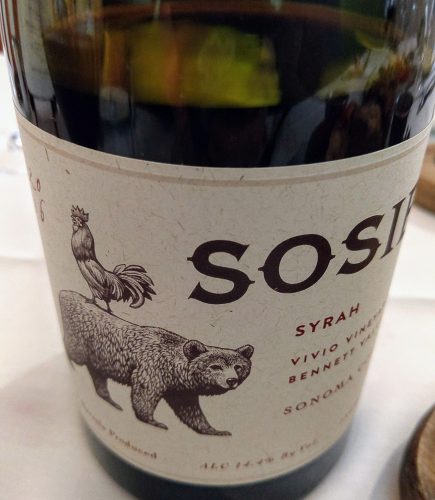 Earlier picking, a bit of whole cluster, and 7 percent Roussane co-fermented all come together to make this red the most clearly French-inspired of Sosie’s lineup. There’s excellent floral lift, a bevy of red plums, dark berry compote, wild herbs, mint, bramble, and baking spices. The palate is at once large, smooth, meaty, and long, without losing a sense of composure.

I loved – looooooved– the 2015 vintage of this wine. The 2016 is just as excellent. Unfortunately, the vines just got pulled due to virus pressure, a tragedy that I might not get over any time too soon. Black cherry and fantastic herbal spice introduce this tight, taught, young blockbuster, giving way to some grit and grip and lovely graphite notes. Characterful throughout, with dark fruit and even darker mineral notes. “Get it now, because it can never be replicated,” Kieran wisely advised… and I was crying on the inside when I heard it…