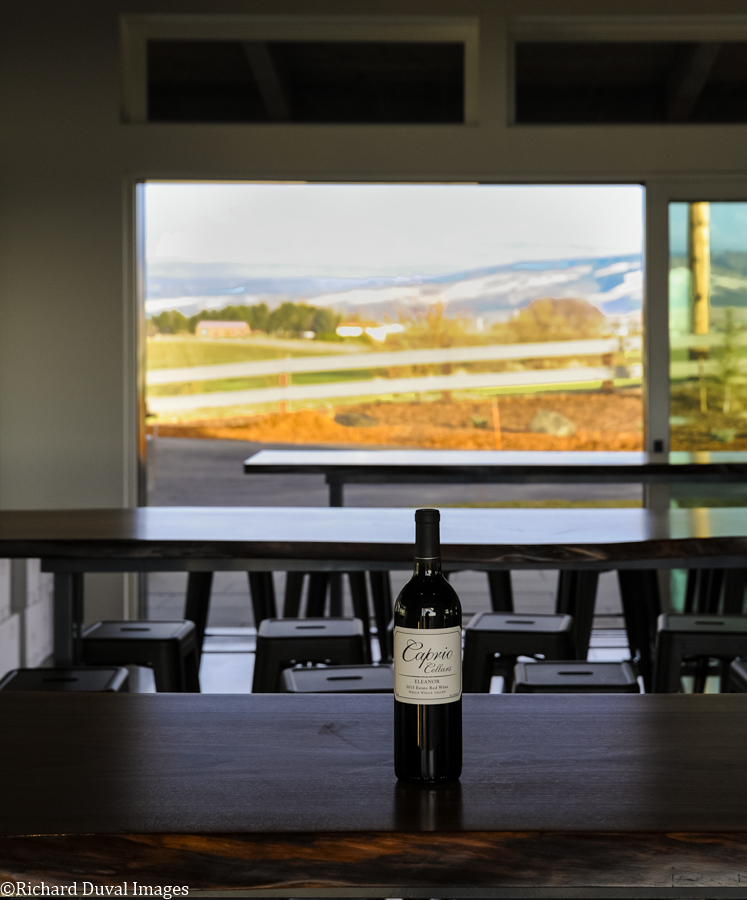 You wouldn’t know it by looking at his relatively clean-cut appearance now, but Caprio Cellars winemaker and owner Dennis Murphy used to be in a heavy metal garage band.

In fact, I give him mad props for instantly and authoritatively identifying who Eddie was during our recent Zoom tasting (as in tasting over Zoom, not tasting Zoom itself, of course). [ Editor’s note: If you don’t know who Eddie is, watch this NOW, and then smack yourself in the face for not having previously been privy to the awesomeness. ]

In a sort of poetic callback to those halcyon wanna-be metal maven days, when Murphy founded Caprio Cellars in the mid 2000s, he told me that “for a long time, we just tasted out of my garage,” and describes Cabernet and Merlot as “the bass and the drums” in his red wines. But we’re getting a little ahead of ourselves here. Let’s set the stage a bit…

Murphy was a homebuilder in the Pacific Northwest (with Hayden Homes), and got the wine bug. He ended up splitting his time between Bend, Oregon and Walla Walla, Washington, checking out the wine scene and reminiscing about his great-grandmother Sanitella Caprio, who was an arborist of grapes in Italy before she emigrated to the U.S. Murphy started working harvests at Pepper Bridge, and began “running across” influential area winemakers like Cayuse’s Christophe Baron. He noticed that “when contract fruit came in [during harvest], they were a little more grumpy”—and thus a firm focus on estate fruit was etched into his mind for future reference.

Murphy was, as they say, a newbie at the time he bought his land. But “I did know real estate,” he told me; “I was right next to Pepper Bridge” and so he figured if they had a really good spot for wine, so would he. It took two years to retool the soil, and when the brand was officially born, he named it after his late grandmother—as well as calling his estate vineyard by her first name, “Eleanor.”

Those vines now source Caprio’s flagship red (also named “Eleanor”), which was the focus of our tasting. And now t hat we’re all caught up, let’s talk turkey about that vineyard and its wine, because they are far, far from being turkeys.

The Eleanor vineyard site consists of a whopping two acres of Cabernet Sauvignon, and one of Merlot (told you it was small). This red is also sourced from the somewhat larger Octave vineyard (22-acres of hillside plantings of Cabernet Sauvignon, Merlot, Cabernet Franc, and one acre of Malbec). Only 439 cases of this 2017 were made. Murphy first charitably described 2017 as “a tough year” before relenting. “It was brutal.” Fortunately, Caprio experienced no smoke taint from the region’s raging wildfires, but the cloudiness really cut down on plant photosynthesis, reducing yields. “The Merlot was excellent” according to Murphy, so it constitutes a higher percentage of this blend than previous vintages (the breakdown: 50% Cabernet Sauvignon, 28% Merlot, 12% Malbec, 10% Cabernet Franc). Broad on the palate, with great balance, this red has ample power, and enviable amounts of spiciness and black olive tinges. it’s meaty, with dark fruit and has that dusty Pepper Bridge tannin thing going on the nose. Overall, this is plummy, dark, really nicely textured, and the spices and tart cherry action on the finish are absolutely stellar. Gorgeous stuff all around, and with a friendly, approachable streak, too.

Murphy mentioned that the goal behind Eleanor is to produce “beautiful, very careful wines”—and there’s plenty of careful craftsmanship and beauty in this 2018, which he described as “a playbook year for us.” 798 cases were made of this blend (59% Cabernet Sauvignon, 19% Merlot, 15% Malbec, and 7% Cabernet Franc), given that Mother Nature payed along much better than in 2017. Way more dark and green herbs are evident than with the 2017, with pencil lead, dusty spices, and dried violet aromas. The palate is way different, too—it still has the plumminess, but the acidity is more banging and vibrant. The overall impression is of reserved elegance. That long-ass finish is fresh all the way, too. With its poise and tension, this is more award-winning suspense film than blockbuster.