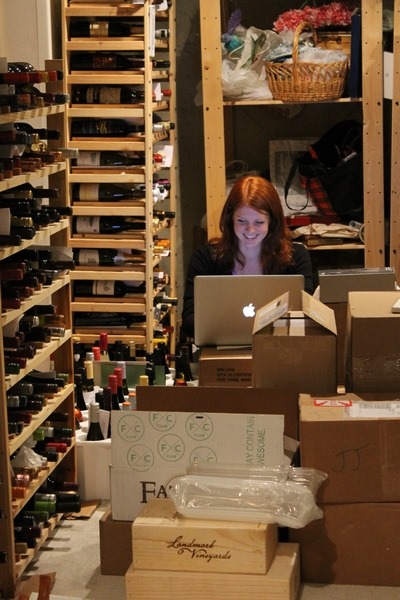 Last month, I had the sad duty of bidding farewell to Shelby Vittek, who most of you know as “The Young Unpaid Shelby,” the 1WD intern. Shelby’s official internship (the actually-earning-university-credits part) concluded at the end of March. Everyone in Roberts HQ has been sad to see her go, most palpably my daughter who literally hung herself around Shelby’s right leg, mockingly begging her not to leave. 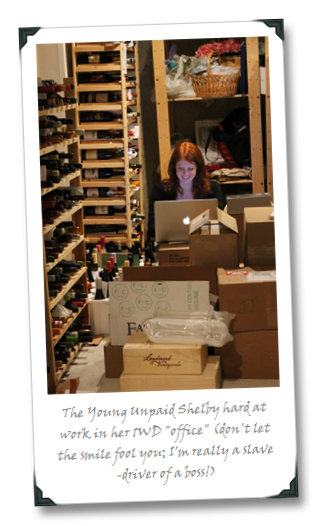 Only a few weeks removed from having Shelby around to help out, and I can say that I wish I’d grabbed the other leg and begged her to stay. From cataloging samples and finally making sense out of the sample pool mess that had taken over my basement, to working directly with Google on performing the technical legwork required for setting up The Punch Down show, to performing research that made its way into several articles across all my various gigs, Shelby totally crushed it as an intern. So much so that we’re discussing opportunities to keep her on in some (hopefully paying) capacity, along with the occasional guest post.

Which is, I think, where Shelby really shone during her 1WD tenure: behind the keyboard. Her guest posts were stellar, her writing chops are impressive, and I can tell you that she’s bright when it comes to yielding knowledge of the wine world (so much so that her smarties outshine some people that I know who involved in the business and are twice her age).

All of which is another way of saying that if you’re in the biz and are reading this, you ought to seriously consider this young woman if you’ve got a job opening requiring great communication skills combined with practical wine knowledge and a drive to continuously improve on both.

Now that I’ve given you my commercial for Shelby’s professional value-add, we can talk about the fun stuff: namely, wines that she picked to serve during her send-off dinner…

Speaking of knowledge, Shelby now possesses more intimate knowledge of the 1WD wine sample pool than any other living human being, myself included, after having spent many, many hours cataloging and organizing it, and probably coveting portions of it. And so, given what a great job she’d done while working under the 1WD banner (a nicer way of saying “while slaving away in the cold 1WD basement”), I wanted to thank her by cooking up a large, multi-course meal of dishes largely chosen by Shelby, and basically giving her free reign on the samples to pair with the each course. 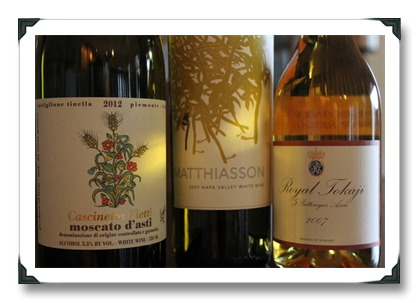 Here are the pairings, and the wines that Shelby chose, some of which form, I think, a interesting viewpoint into the “soul” of the 1WD sample pool…

First up were gougeres (yes, that is really how we roll in the kitchen, people!), paired with a Moscato that Shelby chose because she’d been to the winery in northern Italy recently, and wanted us to experience honest-to-goodness good Moscato. I loved this wine, and thought it was great value (and an amicable aperitif… sorry, felt the need to practice some alliteration there… ok, so technically it’s not alliteration because the stressed syllables are different… ok, I’ll shut up now). A little spritzy, a lot floral, and… okay, okay, yes, it’s a tad cloying, but also fresh enough and friendly enough and loveable enough to let that all side. 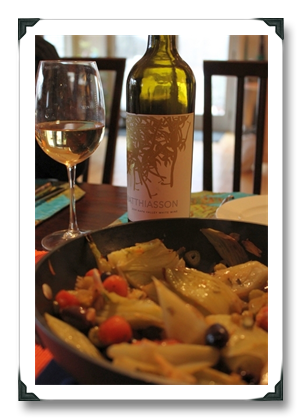 For the second course (roasted fennel salad), Shelby wanted me to pick “the best California white you have” in part, I think, to counter the (incorrect) view from her guest posts that Shelby is somehow down on all CA wine. This pick (56% Sauvignon Blanc, 28% Ribolla Gialla, 8% Tocai fruliano, and 5% Semillon) was a no-brainer, and not just because it’s my favorite white wine in all of CA at the moment; it’s also a wine that is sort of spiritually linked to the success of 1WD. Matthiasson discovered this website when 1WD was still a swaddling babe of a blog, and I was the first one on the wine scene singing the high praises of their white (an opinion later validated by pretty much every major critic in N. America). It could be said that Matthiasson’s exciting white blend in part “made” 1WD; certainly there isn’t much more that needs to be said by me about how fantastic this wine can be. Anyway, it’s aged marvelously: vibrant, nervy, rich and heady, now sporting more nuttiness, candied grapefruit peel, pears and honey than when it was first released (and it’s still a bit floral, too). Maybe even a hint of coconut and marzipan. And more than a hint of awesome. 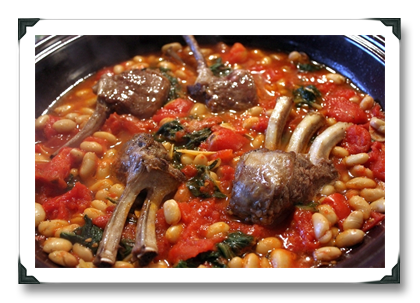 Okay, so I knew the intern was going to pick the single most expensive sample in the kitty to pair with lamb tagine. Shelby likes to present herself as professionally calm and collected, but she just about lost her shizz when this sample showed up, as part of a shipment of Bibi Graetz wines that also included the provocatively titled Soffocone, the subject of an as-yet (at the time of this writing, anyway) unpublished piece for my Playboy.com column. 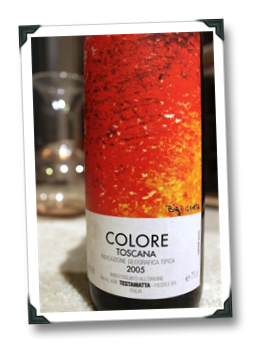 The day this shipment arrived, when I popped down to the cellar to check in on Shelby she greeted me with the widest eyes I’d ever seen on her face.

And so Shelby got to try in a glass or two more cash-per-sip-value than she’d normally spend on her wine budget in a month. The `05 Colore just about jumps out of the glass (you can smell it a good 2-3 inches away from the rim); plums, stewed red fruits dark cherries, orange peel, anise and sweet spices, chocolate, leather. Graetz pushed the ripeness but did not go overboard here, and my favorite part of this excellent wine is how much energy and power and poise it has; it’s certainly one of the best Italian reds I’ve had in a long time. And the finish is… insane amounts of long… almost as insane as the price. Equal parts Sangiovese,  Canaiolo, and Colorino, and 100% Kick-ass.

Shelby picked this Furmint-and-Hárslevelü-and-Muscat wonder because she’d never had a Tokaji before, and that’s just a situation that no wine geek can let stand for a fellow wine geek. RT is a producer that has, in my admittedly limited experience with them, never let me down. The streak was maintained with this beauty, matched up against caramelized banana tarts. To get any more orange notes, you’d need to be in a Florida orchard; to get any more honey, you’d need to live inside an apiary.

As for how we should close this off, I think the following short sequence of “cheers!” between Lorelai and Shelby (wearing Lorelai’s bike helmet, presumably because Lorelai thinks dinner at our house is a bit of a dangerous sport?) serves as the most apt send-off of our send-off. To Shelby: thanks again for the time you spent being a part of the 1WD – and Roberts – family! And if you want to come back to catalog a few (okay, several) unopened boxes of samples, I might be able to offer some wine in payment… 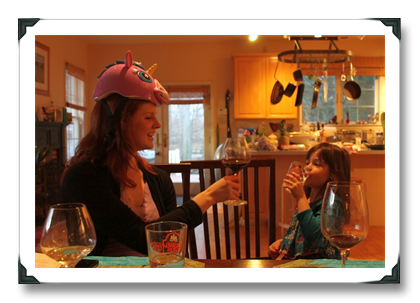 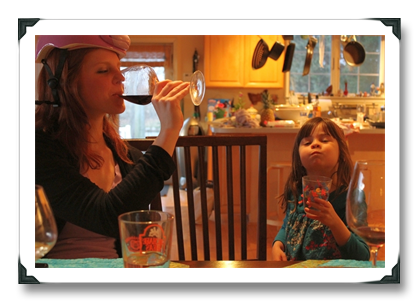 16 thoughts on “What We Drank When Shelby Left Us”