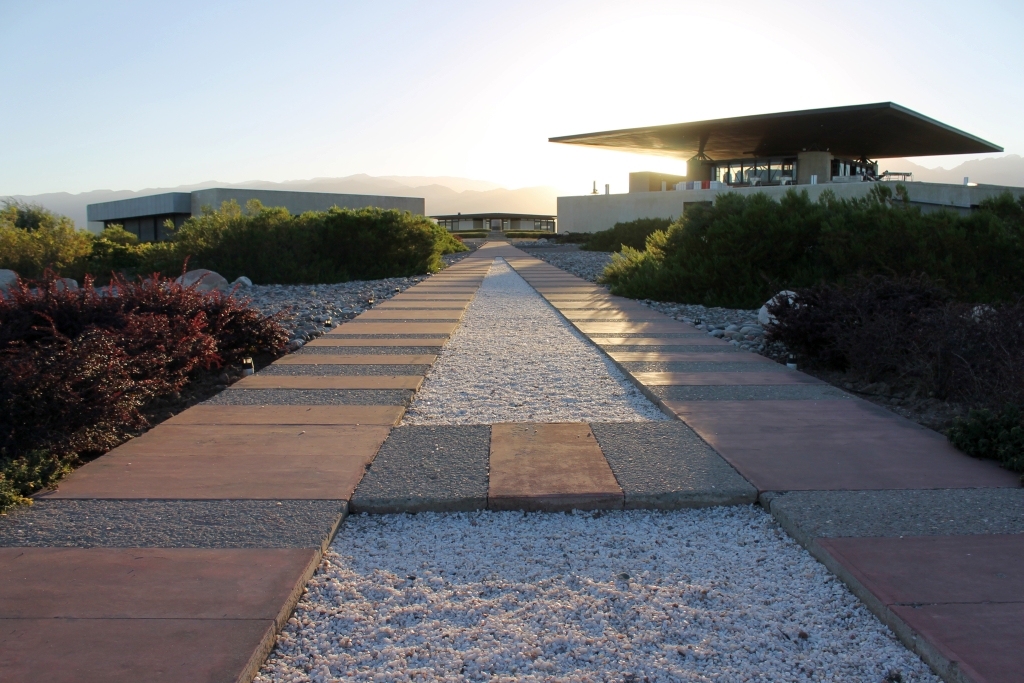 [ Editor’s note: This piece was originally written for my old Playboy.com gig, was purchased, but due (I think) to staff turnover there, was never published. I’ve attempted multiple times to buy this back from PB, because I really liked how it turned out, but never heard back from them. So… I’m reprinting it here, because it seemed appropriate for April Fools’ Day, and it was fun to write so I really wanted it so see the light of day at some point. Enjoy! ]

When you’re standing at the bottom of the hill upon which the ultra-modern winery of O. Fournier is perched, as the base of the mountains in La Consulta, two explanations for the elaborate construction spring immediately to mind.

1)    The O. Fournier building is actually an extra-terrestrial scouting ship that landed in Argentina, got sidetracked by asado barbeques, half-naked girls and soccer, thus abandoning its mission deciding to stay and make wine.

2)    O. Fournier founder, Spaniard José Manuel Ortega Gil-Fournier, is actually a Bond super-villain, the Argentine winery being a front for his fiendish plans to hold the planet hostage to his whims. Clearly the huge hollow columns supporting the winery house some sort of missile silos?

It’s easier to daydream like this when you’re standing in the dusk half-light as the sun sets behind the mountains, and you’ve already had multiple asados and wine tastings that same day.

Ortega, a stout man with a slightly ominous beard and small, round glasses, looks every bit the part of potential international evil mastermind bent on world domination when he greets me at the winery. He’s impeccably polite, but slightly self-absorbed and there’s no mistaking the undercurrent of agitation he feels at me being a bit (okay, more like several hours) delayed due to my lunch asado, which means the diner asado will be even later than planned (note: do not visit Argentina if you dislike eating the equivalent of several cows’ worth of meat in a week).

Ortega speaks in grand terms as we tour the O. Fournier complex. “It doesn’t make sense to talk about ‘Argentina’ wine now,” he says defiantly, “it’s too broad. The ‘New World’ of wine is old enough now.” The passion shows in his eyes when he says it; do I detect the air of malignant narcissism that could serve as back story for a Bond bad guy’s motivations? Better be careful with this guy…

Ortega’s a former bank exec who then got into winemaking, so we know that he probably had some serous cash to get the winery going.  “The money-printing machine broke in 2007,” he quips, “so everyday now I check if the banks own the winery, or I own it.” Ah, more motivation? Revenge on the world’s banks? This guy’s definitely an evil mastermind. From here on out, we’re calling him Dr. O (Fournier)…

Fueling my speculative fire is the fact that eighty percent of the winery is underground, the metal-grated flooring providing a vertigo-enducing view all the way down to the lowest basement levels of the complex (where better to hide surreptitious missile production from satellite surveillance?). The barrel cellar is ludicrously oversized for the amount of O. Fournier’s current production, and has a honeycombed ceiling (no doubt to support the missile silo hatches opening without compromising structural integrity), and the glassed catwalks that crisscross the buildings top layer just look like the kind of things that ought to be exploding during a climactic firefight at the end of Bond film. One of those catwalks houses about seven small “micro-vinification” tanks; Dr. O says they’re being used for testing changes in winemaking techniques that later get incorporated into the official production, but we know those tanks actually contain the airborne mind control serum that he plans to unleash on the unsuspecting public when his missiles explode over the capitol cities of each nation, right?

The open roof of the winery has a large ceiling to shade the winery workers from the intense Argentina sun. “We only use it during harvest,” Dr. O explains, “of course, it would have been less expensive to hire supermodels with umbrellas to shade the workers!” Does that mean the ceiling is retractable? Because you’d need that to launch missiles, right? I make a mental note: check on any reports of the recent disappearances of yachts full of Swedish supermodels, just in case Dr. O has a backup plan for shading his henchmen.

It dawns on me at this point that I really need a Bond girl. Preferably an Asian beauty, with a crazy name like Mai Poon Tang. And for the safety of the god-fearing world, I need to stop Dr. O’s fiendish plot, whatever it may be.

We tour the impressive on-site gallery containing works by local artists, part of which contains a small bottle library of previous O. Fournier vintages, and a long, thick wooden table. “This is ironwood,” Dr. O tells me placing a hand ominously on the table, “the only kind of wood that sinks in water…” Classic Bond villain call-back scenario… he’s definitely going to have his henchman chain me to that thing later and throw me into the shallow lake outside the winery’s on-premise restaurant after we have asado. Time to act.

“Uhm, think I’ve had a few too many glasses,” I stammer, trying to come up with a viable excuse; “do you have a john anywhere down here?” I slinks out a side door, navigate my way past the bathroom and down to the lowest levels of the complex. I stick to the shadows, avoiding “winery” henchmen while planting small explosive charges at the base of the winery columns, which at this point I’m sure house the missiles, then I return upstairs. As a precaution, I leave one charge hidden behind the side door…

Over that very late dinner asado, Dr. O tastes me through his wares, no doubt in an attempt to dull my senses and make me more vulnerable to an attack by his henchman. An approachable, floral and pretty 2011 Urban Uco Torrontes; a sexy, rich  and sophisticated 2011 Sauvignon Blanc from the Vista Flores area; a fresh, leathery, austere and almost linear 2009 B Crux Malbec blend; a savory, soft and elegant 2006 Alpha Crux red blend. My head starts to spin – he might be an evil mastermind bent on world domination, but he makes damn good juice.

As we taste the highlight of the evening – the spicy, heady, plum-and-tobacco-laden 2001 Alpha Crux red, made primarily from Tempranillo, poured liberally from large magnum bottles – Dr. O slips up, and reveals too much. “I wouldn’t be selling my wines 280 days out of the year all over the world if I believed in critics’ scores,” he hisses. “We use no outside advisors; what if a favored winemaking consultant like Michel Rolland died tomorrow? What if he left for the Himalayas? We may never be the flavor of the month, but we will be one of the top wines!”

All at once his evil plan becomes clear. He’ll launch his missiles in order to deploy his terrible mind control serum on the world, and convince them that his wines deserve higher scores from wine critics. Demand for his wines will then increase 4000 percent, driving prices for his wines into the stratosphere. Then he’ll move to Phase Two of his sinister plan, in which he will send a satellite into orbit which will use the power of sun’s rays from the vernal equinox to fire a high-intensity laser beam at his vineyards, flash-ripening his grapes and allowing him to meet the increased demand. He’ll net billions. He must be stopped.

“Muchas gracias for the hospitality, Dr. O!” I shout as I leap from the table. His henchmen are on me, but I hit the switch on the detonator concealed in my pocket, exploding the hidden charges. The entire complex shakes, and begins to crumble to the ground. In the smoke and confusion, I escape into the cool Argentine night, Dr. O screaming in bloodthirsty rage, vowing revenge…