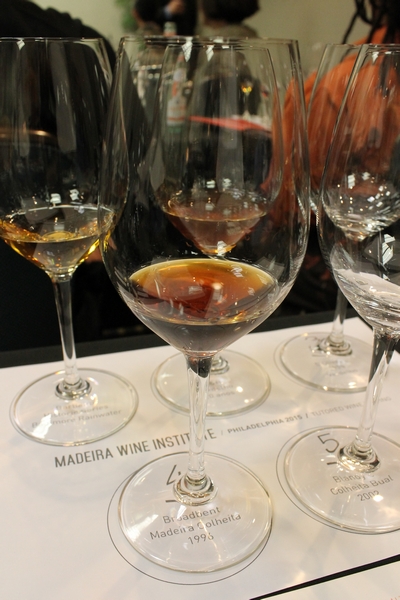 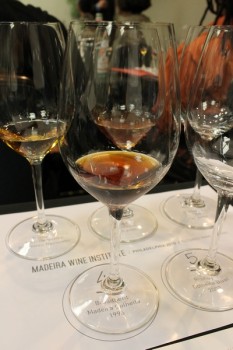 “If you’re looking for the worst place in the world to make wine, Madeira would be a candidate.”

Also sprach Rui Falcão, during a recent tasting/masterclass for the media in Philly, hosted by the Madeira Wine Institute.

You see, this is why I love Madeira with a passion bordering on unreasonableness. And the border is quite close. And porous. It’s not a style of wine that could be planned or designed; it had to evolve. It’s the wine world’s version of the triumph of evolution over intelligent design. Well, that and the fact that it’s responsible for what might have been the single most interesting wine to ever get processed by my liver.

Falcão’s talk on the wines of Madeira was fascinating in its highlights of just how absurd Maderia wine is, and how f*cking lucky we wine geeks are to have it.

Compared to Champagne, the base wines for Madeira are “truly awful,” according to Falcão; these are wines that are obnoxiously high in acids, and laughably low in alcohol by volume. But of course, they then become “something extraordinary. Madeira is all about how you age the wine…”

Just thinking about the aging requirements of Madeira is enough to give logistics accountants headaches for weeks. Colheita versions can only be bottled after five years. Vintage wines must be aged for a minimum of twenty years before bottling. 2015 has seen the introduction of a new blended category, “over 50 years.” If you’re an impatient winemaker on the island of Madeira, you live in a kind of intellectual hell.

Of course, we’re talking about a fortified wine here, which in itself is interesting, seeing that the spirit used for fortification isn’t produced and distilled locally. It can’t be; less than eight percent of the island is available for farming, so there’s no space to devote to growing grapes meant for spirits.

By the numbers, it would seem that winemaking on Madeira is a dying art. As of 2015, there are about eight wineries on Madeira (no, that isn’t a typo). Of the eight, one is new, and still aging their wines, and another was just purchased, so there are “really only six that matter in the export market right now,” according to Falcão.

Of those six producers, only two own vineyards. The largest is a ‘whopping’ ten acres. So, grapes are mostly sourced from growers, of which there are… about 2100. The average vineyard size? One acre (the largest is about thirty acres). The smallest grower, by the way, consists of three plants (no, that’s not a typo).

We’ve not even touched on the difficulties of Estufagem production, farming the poios terraces of the island’s steep slopes, and picking grapes from the latada trellised vine system. Or the fact that unlike just about every other aged wine, ever, “color means absolutely nothing with Madeira.”

The whole thing is just so wonderfully, gloriously f*cked up. Unlike the best of the wines produced from all of that potential dysfunction, some of which we’re about to get into below.

A wine made for the U.S. market, by a small producer that is now under fifty percent Japanese ownership; and surprisingly, it’s unlike most of the more tepid Rainwater styles of Madeira you’re likely to encounter on U.S. store shelves. The blend is a five-year, mostly Verdelho with a “dash” of Sercial. The nose is delicate, juicy, and energetic, with nuts, rancio, and some caramel. The palate is great-jumpin’-acids! fresh. The finish is long, with dried fruits, spices, and a kiss of caramel sweetness. Probably the most complex, elegant Rainwater you’re gonna get.

A company founded by two unrelated families who conveniently shared the same surname; a medium-sized producer (by Madeira standards, anyway), and now mostly French-owned. There’s a lot to wrap your head around in this wine. It starts earthy and herbal, with a ton of toasted nut aromas, followed by fresh fruits and sultana. I know the color is meaningless, but the amber hue of this stuff is downright lovely to behold. The palate starts sweet, but quickly hits you with a jolt of electric acidity, Sherry notes, structural bitterness, and alcoholic power, finishing with orange peel and coffee (and that finish is in no hurry to go anywhere). Elegant stuff, and probably in need of food to fully appreciate its vibrancy.

This family-owned producer is justifiably famous, though quite small, and has been in the Madeira business since 1850; it’s now a wealthy passion project with a patient, hands-off winemaking aproach. As Rui Falcão put it, “every year, they try to make a vintage; they do nothing, and after twenty years, they check it.” There is nothing shy, or simple, about this wine. The sherried nose is herbal, with dried fruits, nuts, saline, and caramel aromas that rise up and are detectable several inches above the glass (if your schnoz is as big as mine is, anyway). The palate is medium dry, intense, textural, powerful, fresh, dynamic, nutty, and downright electrified. I loved the mouthfeel of this wine; it’s fantastically balanced, and kicks gustatory ass all the way to the toffee-filled, nutty, extended finish.

Made from Tinta Negra, this is a great wine to use for acquainting yourself with the island’s higher-end wares. While not as elegantly balanced, lengthy, or coherent as the above wines, it’s consistent, solid, and delicious. There’s rancio, caramel, coffee, nuts, a bit of alcohol heat, medium sweetness, and great acidity… just textbook upper-echelon Madeira. 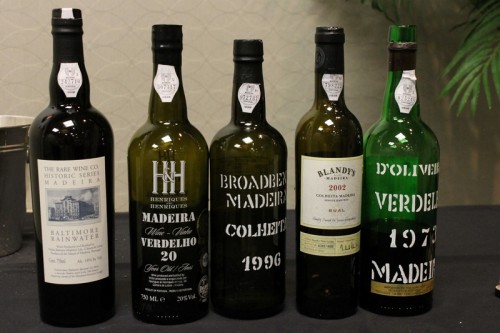 English-owned, and another well-known Madeira brand name. That UK sense of propriety is all over this wine; it’s a classic presentation, a nice introduction to the rich Bual style, and an overall excellent introduction to Madeira in general. Fresh as all get-out, generous with sweet, fruity richness, and laden with lovely caramel, coffee, raisin, and dried fruit aromas.

Technically, this is not the oldest wine that I’ve ever had, but it’s damn close. Part of the fun of Madeira is witnessing its nigh-indestructible nature up-close; hell, part of the fun of being in the wine media biz is getting to taste old Madeira, period. I drank this more so than I tasted it, because, well, f*cking 1901. There’s more rancio, roasted walnut, coffee, spice, and marmalade action on these older D’Oliveiras wines, but the thing that stands out most to me in this case is the intensity; you’re just unlikely to have anything kick your ass (in a good way) as thoroughly and completely as this.