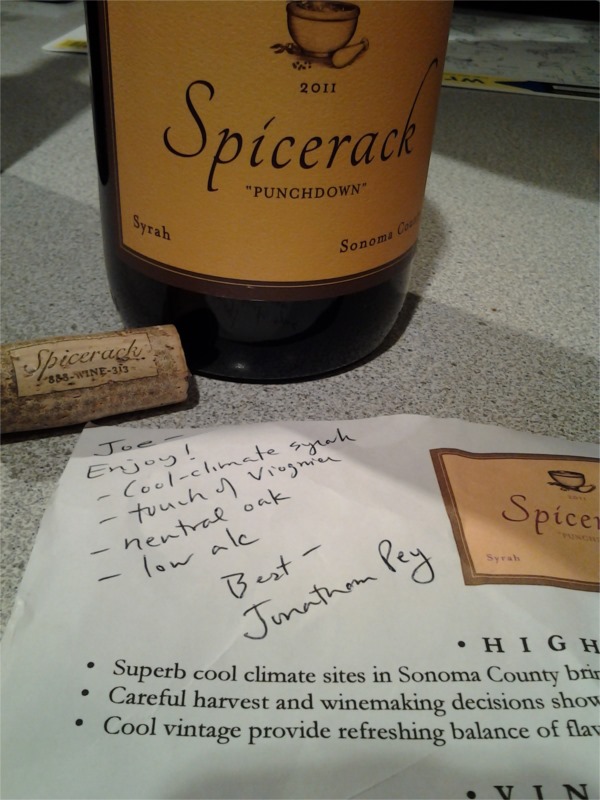 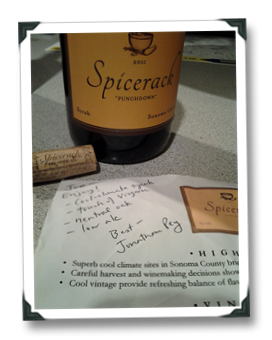 It’s always nice to get something – anything – that isn’t formulaic when you open something up from the wine sample pool. So much juice comes into 1WD central sometimes, accompanied with letters that begin impersonally (not an auspicious start when you’re trying to stand out among a deluge) with “Dear wine writer,” “Editor,” or – directly from-letter-mail-merge-misfire-embarrassment hell – “Dear [blank].”

So… Jonathan Pey’s personalized note stood out when I yanked it out of the shipping box, along with a bottle of Pey’s 2011 Spicerack “Punchdown” Syrah. When I read the hand-written addition (reproduced – and pictured – above), I got a chuckle out of it. I mean, I try not to pigeon-hole myself in terms of stylistic preferences, but it’s true that I am often giving high ratings to extremely well-crafted, complex, age-worthy wines that I personally wouldn’t want to drink (my personal drinking preferences, in my view, should have little to do with the “grade” a wine might get, given that your preferences might be different). I quite happily drink a crap-ton of “B+” wines, ecstatic that I’ve received them for free (and probably more ecstatic than the producers receiving less than an “A”), and happy there’s enough juice left over in that bottle to drink during dinner after I’m done reviewing it.

But it got me thinking… am I that easily transparent, even after all of my careful work (careful by my lazy standards, anyway)? I mean, I smiled at Pey’s note, but I also wanted to crumple it up and toss it in the fireplace, because it seemed so… smug… as if he was thinking “I’ll bet this guy is like those hipster East Coast Somms, all up into under-ripe 13% abv wines that smell like bush stems and taste of battery acid!”

Turns out I am that transparent, after all, but Pey’s not that smug, and his small production wine (15 barrels) tastes nothing like tea made from green vine stems…

Jonathan and Susan Pey made only 390 cases of this stuff, sourced from vineyards in both the Sonoma Coast and a spot near the Mayacamas in Sonoma County. 2011 was a cool, challenging vintage, though as the Peys put it in their note, it wasn’t “challenging” if you look at it from the perspective of viticulture in northern Europe (blah, blah, blah, you can read the spiel for yourself from the tasting sheet). Pey wasn’t kidding about the low alcohol, either: 12.4%. Yes, for Syrah. Yes, from California.

Anyway… the wannabe hipster NYC somm in me dug it, and dig it over a few consecutive evenings during which it held its own against shrimp stir fry, and hearty roast chicken with root veggies and baguette (the latter of which, I’m convinced, is one of the Universe’s most prefect matches for Northern-Rhone-styled reds). There’s enough black pepper to keep Vietnamese harvesters busy for an entire season (seriously… they’re one of the world leaders in black pepper production… OK, whatever), blue and red fruits with vibrancy and a sense of purpose, dried sage and dried flowers, and a stupid amount of balance for the price point. The “touch of Viognier” is 2%, enough to give the wine a nice aromatic lift. Despite its lithe character, things get a little heavy when this juice finishes out, with even more black pepper and some leather whip-cracking at the end. 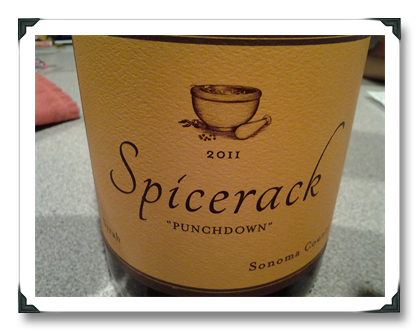 Between this and Kieran Robinson’s recent take on the grape, I’m getting more and more excited about the potential of cooler-climate CA Syrah. And now, assuming we can get our grubby little hands on it again, we’ve got another red option with which to play Hipster NYC Somm (now officially designated HiNYCS and pronounced “HI-nicks”) at home.