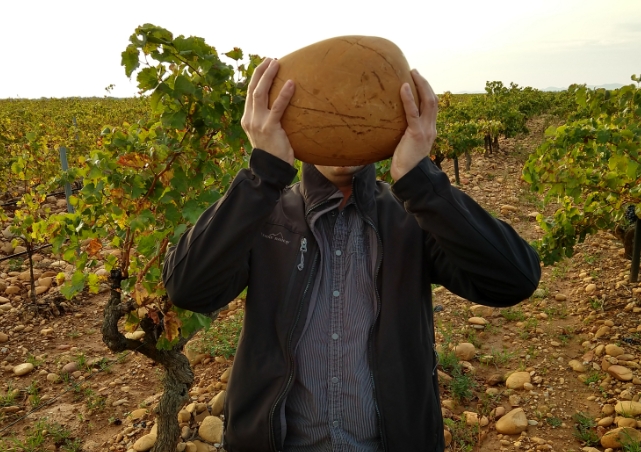 Look at it this way: if I asked you to tell me about some killer Southern Rhône reds (which is 85% of Lirac’s output), you’re probably going to start waxing poetic about Châteauneuf-du-Pape. You might even mention Vacqueyras or Gigondas, which are offering up CdP levels of quality at about 30-40% lower prices. But Lirac? Not happening unless you’re seriously geeky.

The interesting thing is, the main difference between Châteauneuf-du-Pape and Lirac reds is… uhm… well, after touring the place on a 2018 media jaunt, I’m still trying to figure that one out.

Lirac is a small appellation of five villages that sits just on the other side of the Rhône river from its more famous older brother CdP. Like Châteauneuf-du-Pape, Lirac gets a metric crap-ton of sunlight (2700 hours annually), employs nearly 15 grape varieties, uses low training for old vines (average age – about 45 years) due to the windy conditions, and sees Summer vineyard temperatures that can get into the 50s Centigrade (“every year we lose one percent of the vine” due to the dryness and heat, noted Domaine Maby‘s Richard Maby).

The similarities are sibling-level; hell, they’re more like fraternal twins level. Saying that Lirac and Châteauneuf-du-Pape have “similar” soils is like saying that all humans have “similar” DNA. As Château de Montfaucon proprietor Rudolphe de Pins put it, “we have exactly the same soil you can find in Châteauneuf.” That would be galets, stones that are probably larger than your head.

Hell, much of the Lirac wines are even vinified in neighboring CdP (or Tavel). The fact that Lirac is the birthplace of the Côte du Rhône historical designation probably only adds to its sense of being in CdP’s shadow. If there is Lirac typicity, one could probably encapsulate it as “balance.” There’s power to the wines, but also a freshness that even CdP can lack. “We have a natural freshness in our wines,” de Pins told me. Another Lirac promoter, Jean-Baptiste Lafond of Domaine Lafond, summed it up this way: “the main difference, vintage by vintage, is acidity.” And as you know, we like acidity here at 1WD. On that note, here are my vinous thoughts on Lirac’s specialness…

The Maby operation was started by Richard’s grandfather, and they farm 30 ha of vines in Lirac, producing white and rosé as well as rouge Lirac was the first Rhône AOC permitted to produce all three). Mostly Grenache and Cinsault, Maby’s pink is as spicy as they come, with red berry and rose petal action for good measure. The mouthfeel is pithy, focused, fresh, and irresistible.

There’s some controversy as to whether or not this “blend” of Grenache and maybe not much else actually has 1% Syrah in it… but whether or not this is technically playing by all of the AOC rules doesn’t make it any less delicious. Violets, ripe blue fruits, funk, fig, and raisin are all packaged up in a silky, sexy, expressive form here that is both hefty and fresh.

Named after a famous racing horse from the 1970s, this domaine really shines with its higher-end single-plot, older vine GSM red. That red happens to be mineral, floral, spicy, earthy, dark, silky, and above all else, elegant despite its overt sense of power. You also get cocoa, leather, and grit on a long finish. Fresh and taught, the younger vintages are destined for excellence (I loved the still-tight 2015, but the 2006 was special indeed, sporting cedar, herbs, and a delightfully chewy texture).

You can get the skinny on this producer from my recent Tavel round-up; they also happen to make this Grenache/Mourvèdre 50/50 older vine blend. So many violets, augmented by juicy blue fruits, dried herbs, leather, spices, and minerals… You can get lost in the nose, but the palate is just as awesome: balanced, rich, and full of dusty tannins and licorice.

Jocelyn Raoux is a third generation vintner, having started his budding career assisting the family winemaking at the ripe age of six years. Their mostly Clairette Lirac Blanc is a piquant, tropical, oily, and full of white flowers, stone fruit flavors, and apple notes galore. It’s hard to stop drinking this.

Tasted blind, you’d swear this was CdP, to the point that it would send Lirac to the therapist’s couch. A blend of Grenache and Syrah, this is powerful and poised, with very dark fruits, sweet oak spices, and concentration levels that are ultimately cut by a fine line of acidity.

A white wine that kicks ass? Yep. This rich, peachy, heady, and leesy little cement-tank-fermented wonder from Biodnamic producer Maravilhas had my head spinning, in a very good way. Its characterful-ness probably comes from the fact that it’s a true co-fermented Bourboulenc/Grenache Blanc field blend, from an area that was formerly covered in scrub-brush; as their former-Seagate-guy-turned-winemaker Jean-Frédéric Bistagne explained, “I know it’s 50/50, because I see the plots are roughly half and half!”

A single-plot Grenache-based red that’s aged in 600L used oak, this wine evokes the Northern Rhône in its peppery, herbal elegance. The blue fruit flavors are refined and reserved, as are its floral notes. I wanted to steal it from the table. I didn’t. But I really wanted to…

Grenache and Mourvèdre get equal billing here, and so you get as much violet action as you’d expect. You also get a lot more mineral action than you’d expect. Muscular, dusty, spicy, herbal, and excellent, all the way down to its chewy, black cherry flavored core.

Montfaucon’s Rudolphe de Pins is descended from a Baron and a Comtesse, owns a castle, a 16th century cellar, and vines that go back about 150 years that are still churning out fruit. You would suspect none of this from his amiable nature, love of small, energetic dogs, and his guttural, irresistible laugh. His wines are nothing to laugh at, however. This Blanc, crafted from Marsanne, Clairette, Grenache Blanc, Picpoul, and Viognier, is outstanding for the price tag: heady, leesy, floral, full of stone and tropical fruitiness and brioche notes, and sporting lovely tension and superb texture.

“I think that most of the cru wines are drunk too young” de Pins noted, and so “forced” me into trying the 2010 of this little wonder (it had come along beautifully, with cigar and stewed fruit notes, dried herb action, and a sense of focus and “space”). The vines in this blend average 60 years of age, and the magic is definitely in the mix: cherries, licorice, plums, grip, depth, power, and savory, earthy qualities that exceed its asking price.

A “tiny, tiny, cuvée” as de Pins put it, crafted from single-vineyard, 150 year-old Clairette. Nuts, toast, baked citrus peel, lemons, white peaches, saline, minerals, freshness, pithiness, and a long-ass finish that exudes both class and bracing structure. If Lirac has a middle child complex, it will be wines like these that will convince it of its unique worthiness.