The guy himself is smoother than a hi-pH, over-extracted Zin, by the way. At this event, he was working it. As I tasted through some of the Ravenswood SV lineup, I caught bits and pieces of his courting of the store patrons, in some cases converting passers-by (who started the conversations by saying that they didn’t drink red wines) into Zin-buying purchases. Most of the magic seemed to happen by virtue of a simple question on his part: “So what wines do you like?” and connecting their preferences to similar aspects unique to one of the SV designate Zins.

And those SV Zins do, in fact, have unique attributes, some of which are fascinating and become emphasized only in comparison with one another. To wit:

Like all of the Ravenswood SVs, this has some restraint for Zinfandel. Each is 14.8% abv or under, which for CA Zin puts it into potentially “composed” territory. Black raspberry, dusty tannins, and bright disposition; there’s nice structure on the backend of this wine, which starts generous and ends grippy, and remains gritty and spicy throughout. Think spaghetti western hero; I’m picturing Lee Van Cleef. Scratch that, because it’s actually a much more crowd-pleasing (thanks to the dark berry fruit) anti-hero (courtesy of the tannic grip)… it’s more like Clint. 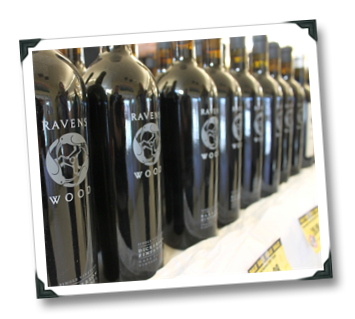 Deeper, darker, blacker cherries and dried herbs, this is a serious, and seriously big, Zin. But… it avoids being chewy and overblown. It has oomph, power, and a hard, cold stare about it. This one is Lee Van Cleef. Yeah, with that stare-down, this one is Lee. By the way, if you don’t know who Cleef was, please Google him, then print out a picture of his face and punch yourself in the head with it repeatedly. That should give you a good feel for how awesome he was on screen.

Rich, resinous, full of baking spices and that DCV dustiness that is reminiscent of dried herbs. A concentrated, packed, complex and true-to-from DCV Zinfandel, and a nice example of why DCV is pretty much my fave CA spot for Zin at the moment. It’s powerful and raisin-y in a good way, but also has “pop” to it, with a serious acidic line that rides out the finish and shows it means business in terms of potentially aging while keeping its kick-ass-ness intact. James Coburn; definitely James Coburn.

There’s a little chocolate, a little leather, a little herbal action, and a crap-ton of spices. This is the most obviously young of the 2010 Ravenswood SV Zins and the one most in need of time in the bottle to settle in and unwind its tightly-wrapped layers. The structure is potent, but undercut with acidic vibrancy and – most interestingly and intriguingly – a sense of minerality. I’m thinking Jason Robards… but that might be a stretch…