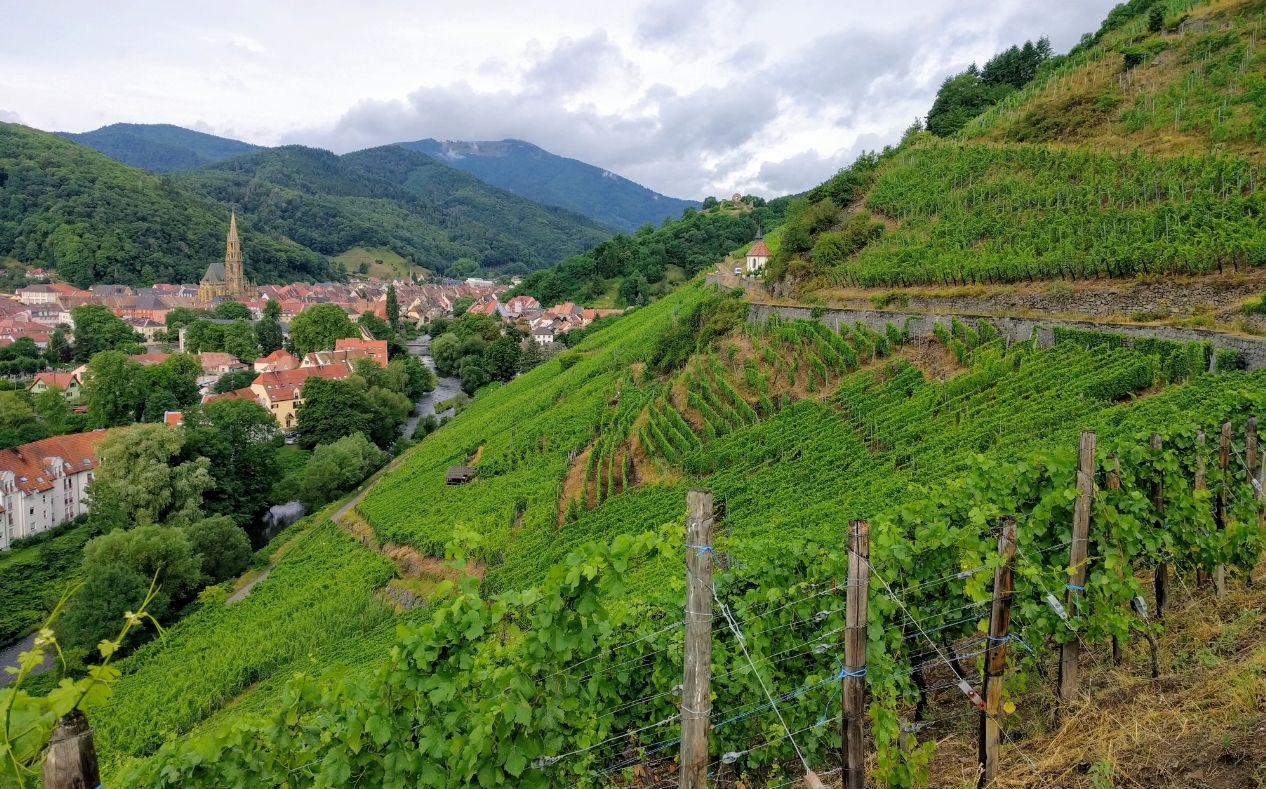 Remember when I waxed all smitten-like over a tasting of Rangen Alsace Grand Cru Riesling? 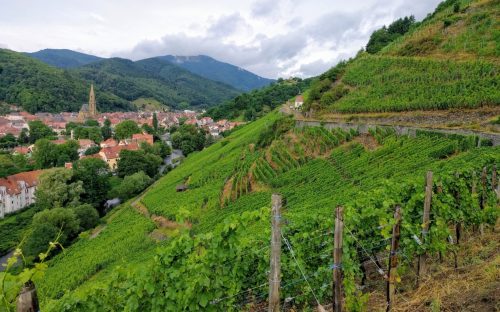 I was so smitten, in fact, that I did  something that I’ve only ever done twice in ten years, which was to reach out to the U.S. PR agency dealing with Alsatian wines and ask them to book me on a media jaunt to the area, so that I could get my feet directly on those Rangen rocks. Which, luckily for me, they did.

In a classic case of be-careful-what-you-wish-for-vuz-you-just-might-get-it, I then had to scale the greater-than-45-degree slopes of Alsace’s southernmost (and by far its steepest) Grand Cru vineyard site, though the view (and the tastes) about 450 meters up were well worth a little breathlessness (PSA: if you consider yourself not exactly physically fit, you might want to skip a visit to Rangen). Think the Mosel, only steeper (yes, the vineyard workes use ropes to secure themselves from falling to their deaths during harvest), or the Douro (only with less terracing and more danger to life and limb). The only marring comes by way of the factories along the nearby Thur river, a holdover from the `50s. Otherwise, this spot between Thann and Vieux-Thann is thoroughly picturesque.

Rangen has a few other characteristics that distinguish it from the rest of Alsace’s (many) GC sites. It might be one of the oldest of the region’s Grand Crus, with the origin of its name being lost to posterity (the first recorded reference goes back all the way to the Thirteenth Century). The rocky soils are about 330 million years old, the result of older mountain ranges and volcanic extrusions all mixed up together. This makes for a harder-than-average vineyard soil, with dark components that help to retain heat, with a more fragile subsoil that allows deep penetration by the vine roots.

You’d think that, with the steepness, naturally low yields, and the fact that it takes new vines closer to seven years to produce fruit here (versus three years in more forgiving environments), that harvest would be a total bitch. But there’s an even bitchier aspect of the Rangen for those that tend it…

The yearly maintenance, I was told by those who perform it, is by far the most difficult aspect of farming the Rangen. Dry rock wall terraces don’t fix themselves, after all. That this is more difficult than dealing with the steep terrain is telling; I mean, structures at the base of the Rangen recently had to be evacuated when a truck, stuck on one of the higher-elevation roads, was in danger of tipping over onto the hillside.

Rangen is such a pain in the ass that, despite having about 500 hectares planted back in the Middle Ages, it was all but abandoned in the 1970s in favor of more easily workable sites. In an auspiciously prescient maneuver, Domaine Zind Humbrecht bought up as much of the GC as they could, transforming vineyards that had fallen into disrepair. Rangen now has about 22 hectares planted, but as you’ll see below, the difference in quantity is made up for in longevity and quality…

The harmony in this case is the field-blending of several of Alsace’s noble grape varieties: Riesling, Pinot Gris, and Gewürztraminer. We’re leading with this one because, in theory, the terroir of Rangen is supposed to lend itself to some of the longest-lived and finessed of Alsace’s GC wines, and this beauty does help to prove that point. Floral, heady, toasty, nutty, and intense, you will need to like lemon rind (and a hint of yeasty botrytis, courtesy of Rangen’s proximity to the Thur) or you will need to go home. 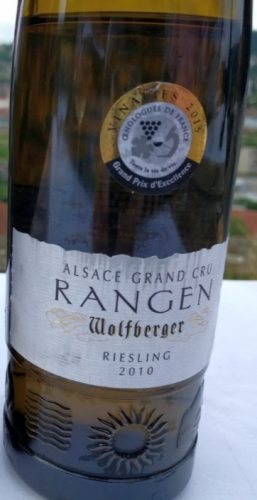 A label that betrays Alsace’s historical German connection, and accurately suggests the power within the bottle. Mandarin, lemon blossom, candied lemon peel, salinity, moving into a wonderful balance of richness and pithy structure, ending with gun-flint and a finish that’s almost as long as the climb up the steep vineyard steps between the vines from whence it came. 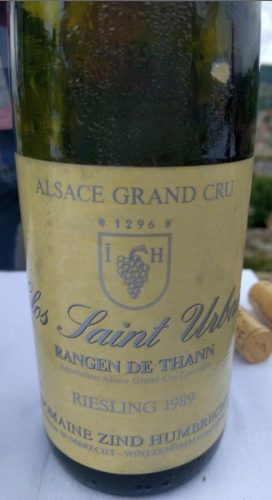 This is juuuuuust about perfection.  As toasty and nutty as you’d expect at this age, but there’s no lack of candied citrus peel or dried citrus fruits to counterbalance the astringent, floral edges and hints of earthiness. Stunning, gorgeous, generous, and long. Go ahead, hate me. 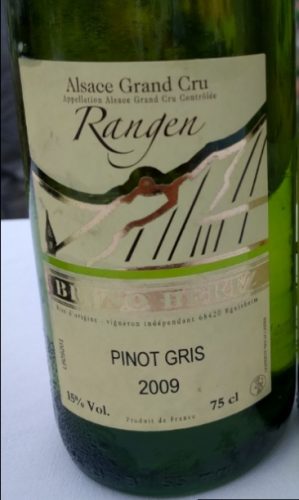 By now you are probably understanding why I didn’t subtitle this post as “Recent Releases.” With almost ten years under its belt, this PG is still showing off its heady, floral side, and still has the tropical fruit richness you’d expect in the mouth, just add toast (and a hella-long, dried fruit finish).

And you’d thought that I’d forgotten about Gewürztraminer, didn’t you? This wine, in particular, is difficult to forget. Roses, (very) ripe stone fruits that are presented in broad, generous palate strokes (see what I did there?); this is a sleeper, I think, in that its aging potential (courtesy of some zesty acidity) will surprise those who hang on long enough to a bottle of this. 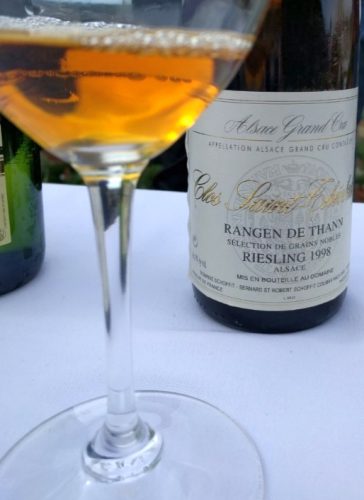 Not made often (they need about 80% botrytis to pull it off), and probably not at all inexpensive, this is absolutely stunning in just about any way that you can evaluate it. The color of orange hard candy. Aromas of quince, dried lemon, oranges, marmalade, sultana, flint, sweet tea, and petrol. Flavors of ripe, fresh citrus fruits. Despite the nearly 160 g/l of sugar, there’s low abv and high acidity, so the whole thing comes off as impeccably balanced (though one sip will tell you that this is clearly very drinkable dessert wine territory). It finishes with multiple levels of sweet dried fruits. As if you didn’t have enough reason to hate me already, right?