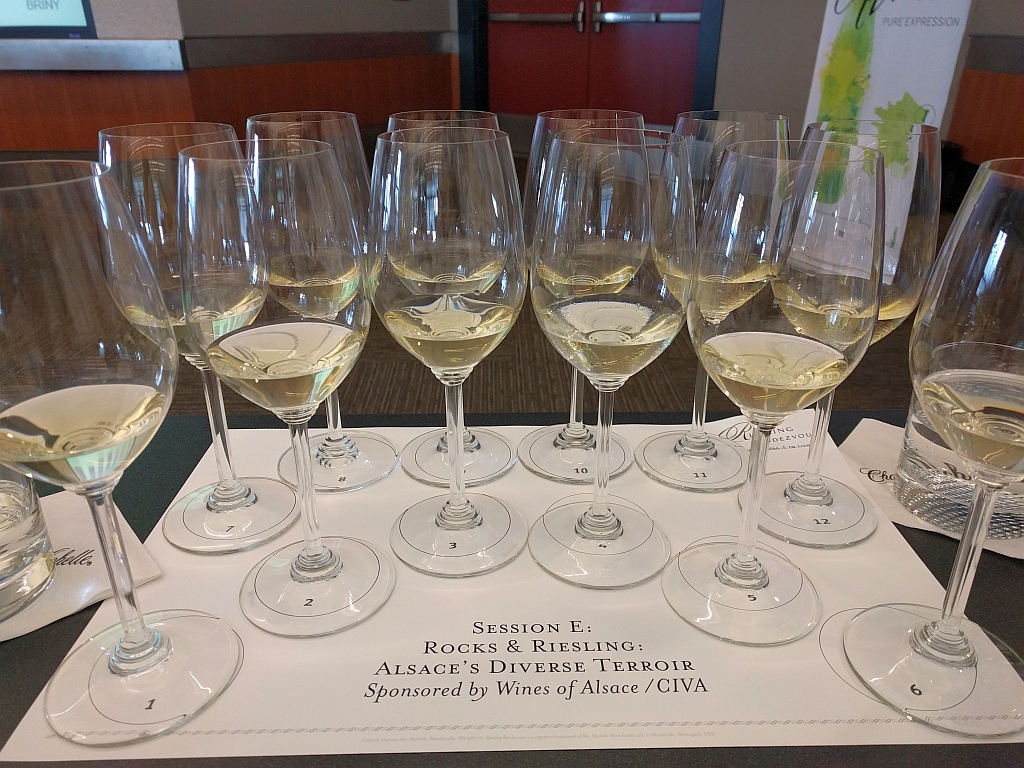 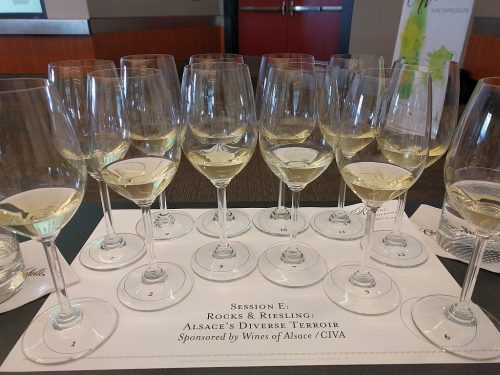 So… we were talking about Riesling Rendezvous 2016, before we were so rudely interrupted by about a week of “real life.”

RR 2016 provides some concurrent sessions, during which you can listen about and, usually, taste wines from particular Riesling-producing regions. I happened to get signed up for what was called “Rocks & Riesling: Exploring Alsace’s Diverse Terroirs” with the entertaining and informative Thierry Fritsch, head oenologist and chief wine educator with Conseil Interprofessionnel des Vines d’Alsace (or CIVA).

Fritsch walked us through twelve wines from across most of the narrow expanse of Alsace, and did so expertly and humorously. I found his slide attempting to match Riesling wine attributes with particular Alsatian soils quite useful (see inset pic).

But I’m not here to talk about any of that, because this is, well, me. I’m only going to focus on one of Alsace’s Grand Cru terroirs, and only two wines. Because those two wines convinced me that when it comes to Alsatian Riesling, I don’t know what the hell I am doing; I am a mere babe crawling his way out of Rangen Riesling-soaked diapers, my friends…

Embarrassingly, at least – actually, especially – in hindsight, I knew more or less nothing useful of import about Alsace’s Rangen Grand Cru wines, apart from the fact that they were usually expensive. In wine lover terms, this makes me an idiot (I am being kind here), given that Rangen’s wines were well-known throughout Europe as early as the 12th Century, the spot having been farmed by Saint-Théobald church monks and achieving some notoriety given its location as a pilgrimage site.

Rangen’s high fetching prices aren’t the only aspect singling it out as special within Alsace; it’s also the steepest (think 55 degree slopes), southern-most, and highest-elevation (around 450 meters) of the Alsace Grand Cru sites. The difficult-to-farm (again, being kind) soils are volcanic schist, also unique to Alsatian Grand Crus.

The following two wines, the last that we tasted at the seminar… well, they captivated me; we’re talking Instant Diehard Rangen Convert levels, folks.

Named after a nearby 15th century chapel that was leveled during the French Revolution and rebuilt in 1934, the vines at Z-H’s Rangen vineyards see good fruit ripeness because of their direct southern exposure.

This wine is absolutely, balls-out, fucking killer. There’s so much fruit complexity, it’s head-spinning levels: orange peel, pineapple, lemon, pear, stone fruits. Then add mint, smoke, saline, green herb, and white flowers to the aromatic mix. The wine is a study in length and consistency, in that the palate has similar fruit flavors as the nose, and comes off as intense, young, and even powerfully assertive. Only 12% abv, but 18 months in 40-year-old French barrels and a bit of malolactic fermentation accuont for its powerful presence.

Hands down, one of the best Rieslings I’ve ever had from France. While the Zind-Humbrecht is about power and complexity, this Schoffit is about elegance, focus, and vivacity. Bernard Schoffit steadily acquired a good portion of his now 6.5 hectares of Rangen vineyards that nobody else wanted to farm because it was too much work. I am very happy that he had the grit to do that, based on this beauty.

Flowers, lemons, peaches, flint, lemon peel, and smoke all contribute to a beautiful, lovely nose. The palate is ebullient, lifted, toasty, and enticing. I’d compare the experience to a good Les Clos Chablis, which for me is the white wine equivalent of comparing a coffee high to smoking crack cocaine. So, yeah, I kind of liked this one.