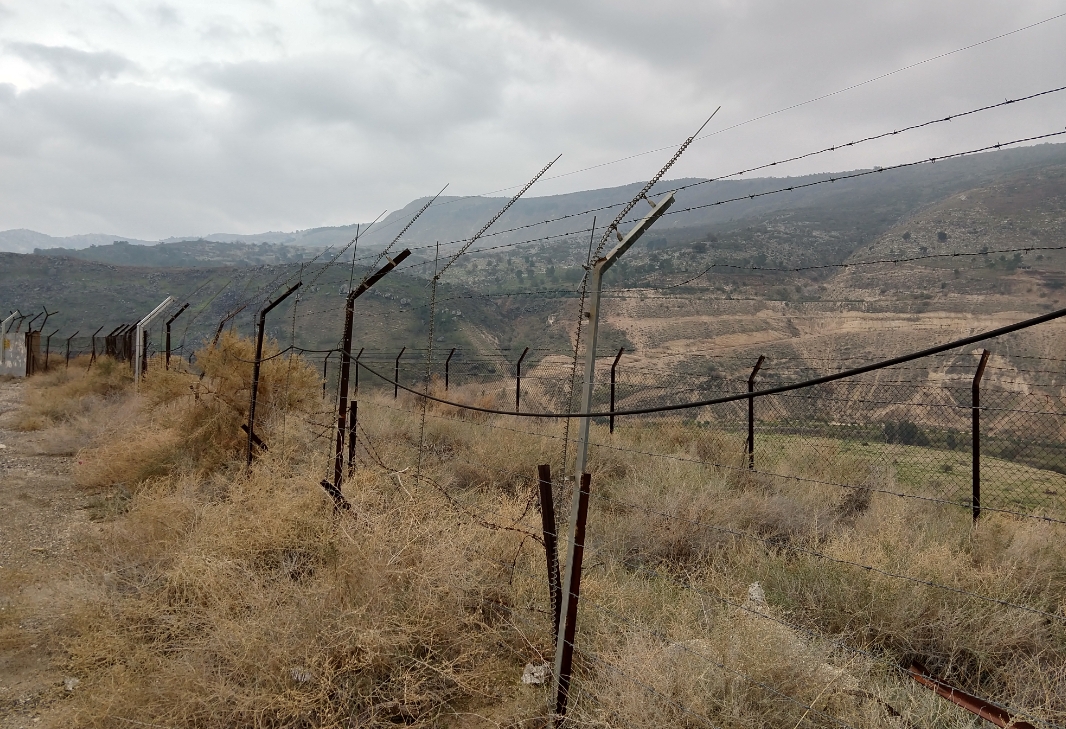 At 8,000 cases a year, with a penchant for avoiding yeast additions, and privately-owned, Chateau Golan is a bit of an oddity in Israeli wine terms. They’re not kosher, a topic about which winemaker Uri Hetz has much to say. “It drives me nuts,” he told me; “a majority of Israelis are not practicing Jews.” It’s a decision that was, according to Hetz, partly philosophical (“why let a minority dictate to the whole?”) and partly practical (the wines are hand-crafted). In keeping with northern Israel’s imposing landscape, their cellar is a bit like a cross between a charming chai and a small reinforced bunker. Hetz’s take on the Israeli wine market is just as practical as his winemaking approach: “It’s understandable that there isn’t a widely known perception [of Israeli wine] in the world,” he noted; “Israel is a small country, and we’ve only been making wine seriously for thirty years, more or less.”

Chateau Golan’s Syrah mirrors their cellar – equal parts charming (herbal, peppery, juicy, and tinged with red fruits) and imposing (sporting serious freshness, leather, meat, and depth). It’s the kind of wine that, tasted blind, would put a sh*t-eating grin across your face to learn where it was made, as it would have kept you guessing. Tasting back to the 2013 of this was a treat, and suggests a nice, long life ahead for the `15.

Yep, they’re doing Touriga; yep, they’re doing it well. Floral, meaty, fleshy, and smoky, this is what you’re looking for when you’re reaching for varietal Touriga. There’s nice roundness and completeness to the mouthfeel, too, which doesn’t fall hollow after coming on strong initially. You’ll want flank steak with this (trust me).

This is Ch. Golan’s premium Cabernet (with “maybe four percent Merlot”), a new release with only about 1000 cases made from a two-parcel vineyard selection, seeing 30% new oak. Juicy, young, and very fresh, red fruits and currants dominate, with cassis, bramble, and tobacco playing supporting roles. Both subtlety and poise are on display here.

UC Davis-trained winemaker Victor Shoenfeld oversees one of Israel’s largest wine operations. Golan Heights Winery helped to bring modern winemaking tech to the Israeli wine scene, in an area that was once oak forests (mostly chopped own during Ottoman rule), and now boats grapes as its number two crop (behind apples). The winery oversees 1500 acres of vineyards, with six winemakers, a 5.5 million bottle production, and their own export company. They’re one of the first Israeli producers to be certified sustainable, and the first international producer to achieve the Lodi Rules certification.

GHW’s vines encompass five different types of volcanic soils (with the southern being older and deeper, and the northern being more acidic). Shoenfeld probably has 99 winemaking problems – from leaf-roll, to wild boar, to having to grow their most promising Cabernet grapes near former Syrian army bunkers, to Bedouins stealing their metal fencing – but a lack of diversity in what grapes can be produced is not one of them.Case in point – their Yarden brand Blanc de Blancs bubbles, a traditional, brut-style Chardonnay sparkler from the northern Golan. Full of peaches, brioche, yellow apple, it’s racy AF, combining lemony acidity with elegant creaminess.

These Chard grapes come from a 1990s-planted, tuff soil vineyard in the northern Golan that is now low-yielding. White flowers, wood spices, pears, lemon, pie crust, toast – it’s all going on here, with an ample shot of vibrancy and excellent length and complexity. The finish is an interplay of jasmine and rich creaminess, and wraps up the whole sexy package.

A spicy, minty, herbaceous, premium single-vineyard CS release (because, hey, everybody’s gotta have one, right?) that’s dense, dark, smoky, and savory, but also lively, mineral, and plummy. While not lacking in power or structure, my main takeaway was that it was a lovely (though undoubtedly young) sipper.

With its inn-like feel, and lineup of concerts and wine/food events, and cozy cafe-and-cabins setup, the family estate Assaf Winery could have been transplanted right out of California wine country. Winemaker (and son of the winery’s owner and principal vintner) Oren Kedem technically was transplanted from California wine country, having previously worked at Michel-Schlumberger (he now lives on the family property). His sister, a trained chef, handles the restaurant side of their tourist-oriented Kedem Wine Village. The background of the main building on their property reads like a microcosm of the region’s recent history: 400 years ago, it belonged to the Turks, then was converted to a school, and did a short stint as a small Syrian army base.

Assaf’s wines have artisan written all over them, particularly this grassy, herbal, and yet also subtle Sauv Blanc. Melons, ripe pear, and tropical fruits get equal time with apples and citrus, with a textural, lovely mouthfeel throughout. The Kedems spent some time in South Africa, and that influence is noticeable here in the assertiveness of the herbal focus.

Three different volcanic soil plots are farmed for this CS, which spent 17 months in both French and American oak. There’s poise and loveliness to spare in this one; its highlights are tangy red fruits, dark plums, freshness, minerality, and a gentle sprinkling of fresh mint on the nose.

Less than 2000 bottles of this reserve red were made, all of it aged for two years in French oak. Spicy, young, and brilliant in its clarity, this is tense, vibrant, and elegant stuff. Plummy and juicy, but also minty and tangy, it has a European heart and a Mediterranean body.

At two million bottles produced annually, Tabor Winery is one of the bigger things going in the Lower Galilee (and in the top five in volume of all Israeli producers), and were founded over 100 years ago (with assistance from Bordeaux’s Lafite Rothschild). Tabor have a bit of a secret weapon in their sharp-as-a-tack, dedicated viticulturist Michal Akerman, who told me “we’re not planting vines, we are planting wine; every week, I’m in every block.”

One such set of blocks, with 40+ year-old, low-yielding vines on chalky basalt soils, is used to create their tropical, fresh, and spicy single-vineyard SB. This is focused, intense stuff, moving from tropical to herbal to vegetal to creamy (the latter courtesy of some lees exposure and barrel fermentation). A serious SB, with serious texture (and ample body).

Overachieving at $30? You’d better believe it. This Petite Sirah/Cabernet Sauvignon blend is named after a storm, and it’s a whirlwind of elements that exceed the sum of their parts. Smoke, violets, dried herbs, black fruits, leather, minerals, silk, sexiness, cigars, baking spices – the interplay is impressive, and clearly tailored to the fine dining scene. This one has the freshness and structure to age well, and the power and deliciousness to make waiting on that aging a difficult proposition.

This was one of the best reds I tasted throughout Israel, and speaks to the particular, unique potential of the Malkia Mountain area, near the Lebanese border, which sits at over 725 meters in elevation (and a few mere kilometers from the celebrated Chateau Musar). The sils there are a complex mix of rare Eocene-era limestone, called “Bar-kochra.” The vines were planted in 2006, and, according to Akerman, are “very stressed; they need a lot of love,” and jokingly adding that “they were born to suffer – it’s a nice Jewish Cabernet Sauvignon!” The finished product is a minor marvel of texture and tension: ripe plummy fruits, dried herbs, mint, dark sour cherries, wet stones, cigar, black and red currants; it’s powerful, deep, concentrated, dark, structured, and yet not overbearing.