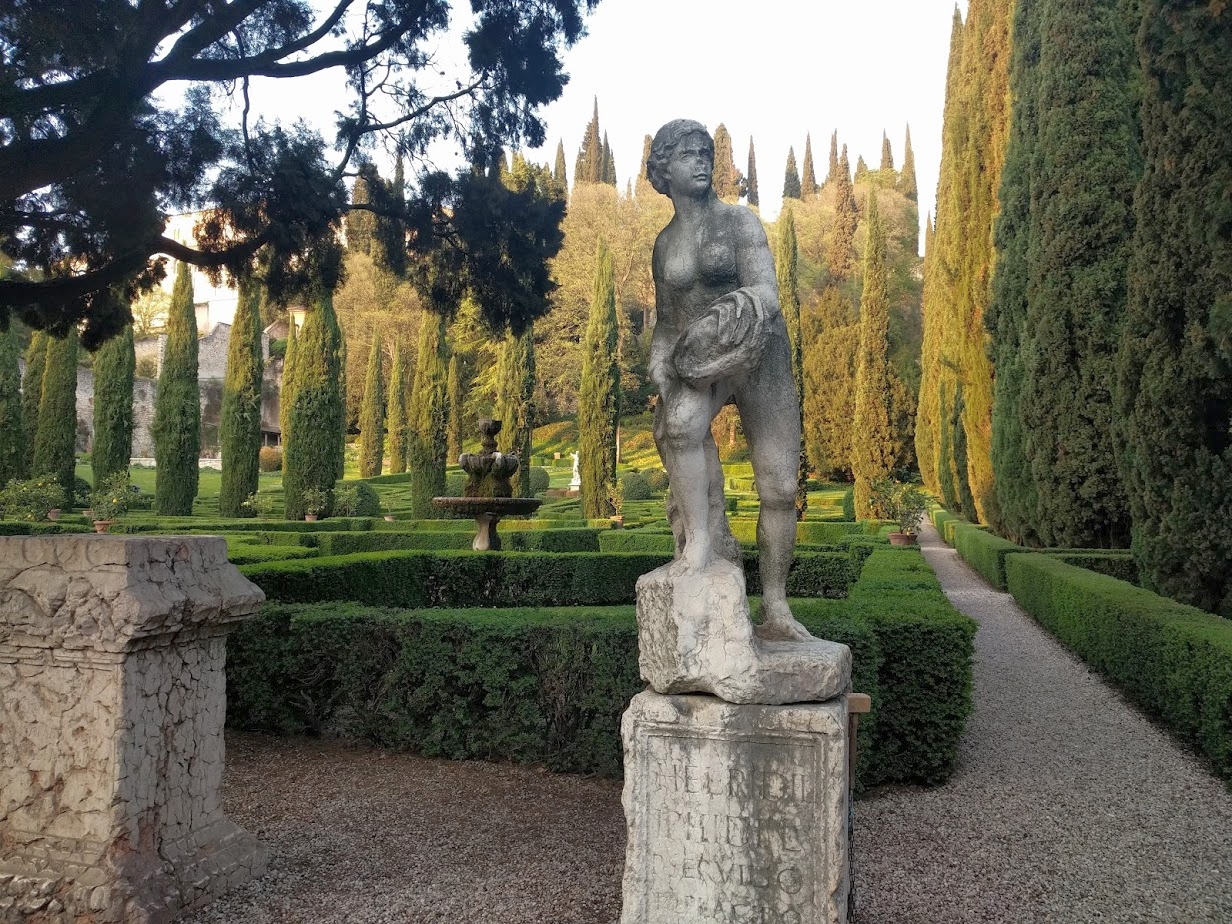 Forthwith, we continue my highlights from the 2017 incarnation of VinItaly, held in Verona earlier this year, and to which I was lucky enough to have been invited as a media guest.

[ For background on VinItaly, details on the first batch of wines that grabbed my vinous attention at the event, and the format for these highlight reels, see Part 1. ]

We have many a wine to highlight in this second installment, so… a rush, and a push, and the land will be ours… let’s charge right into things. First, the bubbles: 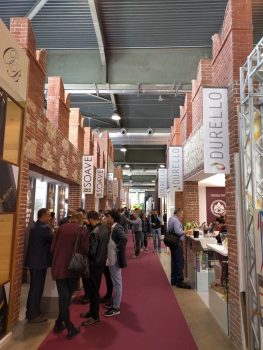 Lessini Durello is an odd bird of a wine; it’s growing, for sure (from 3 to 26 producers in the last two decades, now pumping out about one million bottles per year), but its primary calling card, aside from the bubbles, is still acidity. And I mean, acidity. As in, face-ripping, blood-of-the-Alien-zenomorph kind of acidity.

What I liked about the Ca’ d’Or Selezione is that it offered aspects beyond the face-peeling and gum recession: tropical and exotic fruit notes, limes, white flowers, and pineapple hints that were more subtle than overt. This is Durello tweaked up a notch or two, with an emphasis on balancing all of that ample acidity with purity of fruit…. 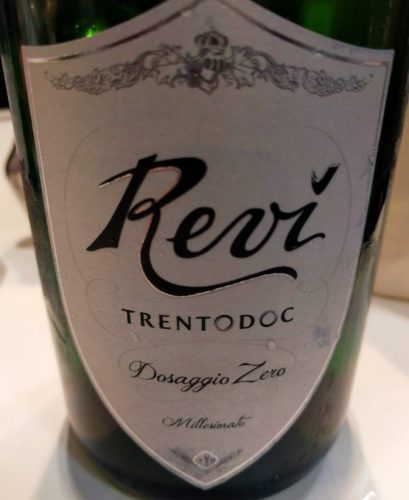 Paolo Malfer founded Revi in 1982, with a focus on showcasing the lofty end of the bubbles available in Trento DOC. And Trento DOC needs it, because for the most part the region’s marketing seems to be summarizable as “we’re not Prosecco… and we’re not Champagne…”). Anyway, this blend of 75% Chardonnay and 25% Pinot Noir is classy, zesty, and laser-focused.

Ferrari’s foray into the Riserva category is downright stunning. All Chardonnay, all hand-harvested, and all selected from estate mountainside vineyards. Think brioche, iodine, quince, citrus, white pepper, white flowers, and enough panache to cause you to nearly obsess over getting another glass of it. 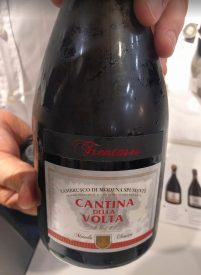 So… it’s not every day that one encounters such a serious take on Lambrusco di Sorbara. Unless you’re winemaker Christian Bellei, that is, who had the wild idea of testing whether or not that grape could produce legit classico method bubbles. The Trentasei shows that question to be answered with a solid affirmative; instead of the candied red fruit treatment, here we have roses, cherries, and wild strawberries, with an acidic backbone that isn’t at all messing around. This is as near to refined elegance as Lambrusco gets. 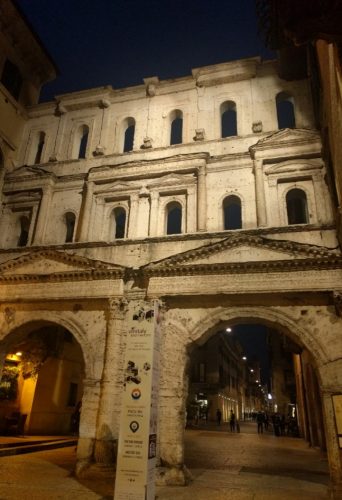 Ah, this little gem… it’s just sooooo hard not to like this. Tiare has a knack for whites (I could have easily picked out their Sauvignon or Friulano as highlights), and I love their take on a grape that doesn’t get much media love from N. Italy, but probably should. Round, full of melon notes, and a bit low-key, this gains momentum and interest as it goes. There’s a linear backbone helping to prop it up, and sprinkles of wet stones, like baubles decorating a place setting.

What does it take to make the best Vespa Rosso incarnation that I’ve yet tasted? Apparently, it takes a blend of Merlot, Refosco, and Schioppettino (the latter a new edition to the label). This is lovely Rosso, with pepper spiciness, hints of minerals and black olives, and a sexy mouthfeel that finishes with power and a slight tannic bite (hey, a little bite is sexy now and then, right?).

Annnnnnd… from here on out, we get into downright exceptional levels of Italian winegrowing/winemaking prowess:

I made a special effort to seek out this producer on day four, when the VinItaly crowds had abated a bit. They are on Etna, as in “on” the Sicilian volcano. The name changed in the `90s, when the family was sure that the wine was good enough that they felt okay putting their name on the label. Their reference point for fine wine was northern Europe – France, et al, – and they claim that they were losing money chasing their dream, until the 2nd generation adjusted their winemaking processes, and their older wines started to show their potential (more on that below). In the case of their primary red, 100-year-old, pre-phylloxera vines at 500 meters elevation are used, and it’s a field blend of Nerello Mascalese and Nerello Cappuccio (about 15%). The result is floral, bright, pure, enticing, expressive, textural fantastic-ness. It’s a red that needs a lot of time, but will show elegance and gorgeousness (to wit: I tasted back to the 2003, which was still excellent, and very much alive). 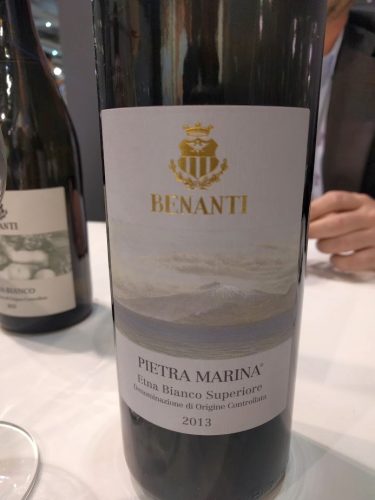 This wine alone was worth the red eye flight to Verona; it’s a testament to why Carricante ought to be considered Sicily’s premiere fine wine grape. Pietra Marina (“marine stone”) is fermented with four local yeasts, spends two years on the fine lees, and another twenty months in bottle before release. It comes from ocean-facing vines that are about 800 meters above sea level. And it feels like a child of the ocean: minerals, saline, and flint notes abound. It’s nearly as bright as a sparkling wine in color, and offers a whole range of citrus aromas and flavors. There’s a hint of almond and flowers, incredible texture and structure, and a sense that the whole package is tight as a drum right now, requiring a couple of years before it blossoms. Just… ridiculous levels of good. 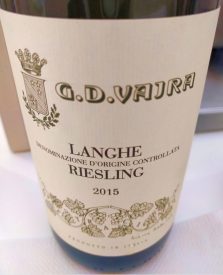 G.D. Vajra is probably best known for its take on Piedmont’s most famous red wine grapes, but I just about fell in love with this slate-and-flowers-filled Riesling of theirs. The style is quite dry, and limes are the primary fruit expression; it exhibits a linear focus that would make the Rheingau a little green with envy.

It’s tough to get your head around some of the G.D. reds without knowing their past works, because at this stage they’re pretty much all raw potential. Such is the case with the `13 Ceretta, though it betrays a little bit of where it will be heading. Think leather, meat, violets, dark cherry fruit, spice, and the kind of structure that demands roast beef. 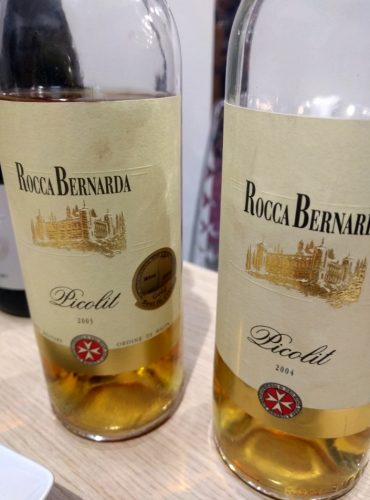 So… Rocca Bernarda more or less resurrected Picolit, which is a pain in the ass to grow and tends not to develop full bunches. In this case, they late-harvest and dry the grapes on racks in a tower, with open windows. Their steep, terraced vineyard has, from what they can discern, the oldest Picolit in the country (60-70 years), with the rest of Italy getting its Picolit clonal selections from their stock. The soils are sandy, dating back about 40 million years.

The 2004 is stunning; sultanas, dried apricot, figs, flowers, and some caramel to round it all out. It’s fresh, piquant, unique, gorgeous, and presumably the top of its game. At least, one would think that until tasting the 2003, which is even better. That vintage adds a more ebullient nose, a bit more balance between the power and freshness, and ads notes of rum, spice, and astringent orange peel onto a finish that I think I am still tasting many weeks later. I just about lost my sh*t over it.

What’s even more exciting is where this wine could go in future vintages. According to agronomist Giulio Senni, they recently learned some ancient Picolit cultivation methods from an old farmer in the area (who Senni described as “not a very hospitable man”), and are incorporating those into the recipe for newer vintages. With his help, an ancient Picolit clone was located nearby, dating back about 120 years. Couple the above with RB’s resources (they are the oldest and largest private agricultural company in Italy, with properties 1000 years old), and geeks like me have very good reason to be excited about where this nectar could be heading.