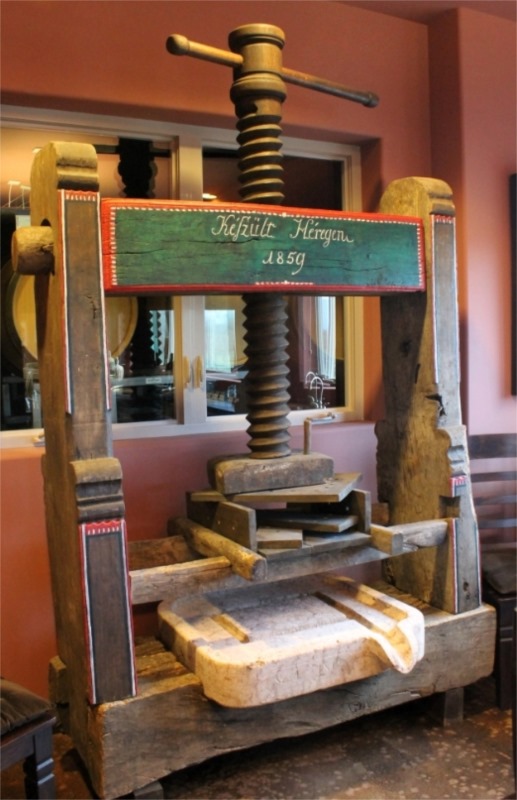 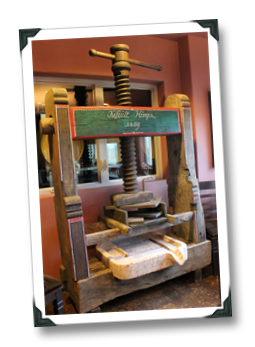 That’s how Lou Kapcsandy sums up the goal of his 3,000 (ish) case production winery, a building that nestles up to about 15 acres of vineyard land that formerly went into Beringer’s `75 Private Reserve (“we purchased it in 2000 without them knowing anything about it,” he told me), and which might best be described as ‘polished-industrial.’

But that kind of upscale nondescript casing is fitting for the no-nonsense Kapcsandy, particularly when you consider that he’s a former chemical engineer and wine importer (not much use for flash in those endeavors).

But just wait until you get a load of what Hungarian-born Kapcsandy has going on in the vineyard and inside that Napa Valley production facility; you engineering types are gonna get a slice of geek heaven out of this.

Let’s start with the land: the Kapcsandy’s had 34 (!) pits dug into the vineyard for analysis, concluding that “literally within fifty yards, the growing conditions are different” on the heavy clay-ladden former riverbed. “At one point,” according to Kapcsandy, “it was 118.5F in the vineyard; the next morning, the same spot was 50F.” NASA-style satellite imagery was employed, convincing them to plant the vineyard along a magnetic north-south orientation, and dense plantings. Fruit is dropped, pesticides are avoided when possible, and generally Lou Kapcsandy frowns a lot when talking about “”what he calls “vineyard gymnastics.”

The results are mostly red blends that, in my experience, stand up to Napa’s best (and particularly shine come Premiere Napa Valley time – those tastings are what prompted my visit to the Kapcsandy’s in the first place). Expensive, for sure, but ludicrously good. Which is why I am waxing poetic about them here in the first place, of course.

So… yeah, let’s geek out on the in-winery stuff now… 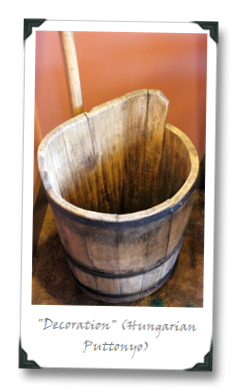 There’s no wood at all in the construction of the winery. The flooring system has stainless steel in it, and there are no seems in order to help prevent cracking and bacteria buildup. No tools are allowed to be shared between barrels, to help prevent contamination by brettanomyces. Hand sorting moves at a (sarcasm warning) brisk 1/2 ton per hour, on a sorting table that’s 36 feet long and manned by 18 workers.

The only real adornments are in the winery’s tasting/meeting area, where an old wine press and a Puttonyo grace one end of the room (Tokaji geeks, unite!).

I think it’s safe to say that Kapcsandy is a clean-freak, which, when combined with Hungarian efficiency and an engineering background, makes for a winery in which most people would be comfortable eating directly off the floor. It’s not clean, it’s not just OxiClean, it’s obsessive-compulsive clean.

At this point, many of you might be wondering if the Kapcsandy’s make any money off of this venture. I’m still wondering that, myself; but mostly I am just hoping that their other businesses afforded them enough money to keep being obsessive-compulsive about making Napa Valley wine that can stand up to some of the best of the region, and even some of the best of Bordeaux (minus the brett, of course).

It’s difficult to argue with the results. Tasting their 2004 Proprietary Red, made at the time by Helen Turley (you’ve heard of her) during her second vintage there, was a strong case in the making for them laying claim to vying for Napa supremecy. Clay, leather, dark and rich fruit; it was still ripe and supple ten years on. Creosote? Yeah, there’s creosote coming off of that wine; lilacs, lavender, tobacco, and elegance, too, with enough structure to keep going in the bottle for a while yet.

Of course, you’re going to be interested in the latest stuff, which we did taste, and which I’ve quite a few (mostly glowing – it was me who wanted to see them, remember) notes below. Bear in mind that all prices below are estimates, as these wines tend to increase in value on the open market after release (good luck):

Well… we didn’t expect this, now did we? Though the inclusion of this grape makes perfect sense nostalgically for Lou Kapcsandy, it makes little sense from a terroir standpoint to try this in a place as different climatically and geographically from Hungary as Napa Valley. But, there it is; honeysuckle, peach, a surprisingly long and mouthwatering finish, and even more surprising harmony, all polished to a glistening sheen.

A little over half Cabernet Sauvignon, with Merlot, Cabernet Franc and Petit Verdot as well, all saignée style and given lees stirring for six months. The result is floral, earthy and reserved, even at tad young and tight, and a rosé aimed squarely at the steakhouse (think a thick chunk of salmon).

The reds are an interesting lineup, and all share some mineral and structural characteristics. As Lou explained to me, in his view, “they’re all dressed up in a nightgown, the only difference is bra size.”

Also just over half Cab Sauv, with the same variety composition as the rosé. Where things get interesting here is the use (14%) of Hungarian oak (you can take the guy out of Hungary, but you can’t take the Hungary out of the guy). I’ve no idea if that oak imparts and additional character to this wonderfully expressive red blend, but I do know that the spiciness and dark fruits merge so well with the mineral components that it’s very difficult to spit this wine in a professional context. On the mouth, things get very sexy indeed, where the Merlot shines and the juiciness is fresh and vibrant.

Again the Hungarian oak is employed along with French, but this blend favors more Merlot (with Cab Sauv, PV and Cab Franc). Nice herbs and chocolate notes greet you at the door, then the dark plummy fruits pile on in generous and plush fashion. Given that, it’s still obviously structured and focused, suggesting its best days are well ahead of it.

The “S. Emilion” style, 62% Cab Franc and 38% Merlot (and 40% Hungarian oak – sorry, I just find that fascinating). Just… fantastic. Really, this is stupid amounts of good; juicy, spicy, herbal, leathery, full of tobacco, tomato and bay leaves, it’s brooding and enticing and broad and lithe all at once. My notes describe the nose as “screaming.”

96% Merlot, 4% Cab Franc… and 0% Hungarian oak! Young, chewy, supple, spicy, with great olive and herb characters, this is dark stuff and immensely serious, too – as in serious minerals, serious fruit, serious structure, and serious quality. You could – and should – stack this up with some of Napa’s best reds (and, how about that, there’s no Cab Sauv in it).

No Hungarian oak, but a lot (89%) of Cab (with some Merlot and Cab Franc thrown in, too). The entrance way is lined with an intense gravel path, and the door is locked up tight right now. Knock hard enough, though, and you’ll get it open a crack, just enough to see what’s inside: herbs, dark fruits, graphite, coffee, toast, tobacco, cassis and plum. The mouthfeel is exquisite, the structural components all in the right places.

What do you do with end vines of Merlot, Cab Sauv, Cab Franc and PV that basically end up becoming late-harvest? Fortify them, apparently, into a fresh, raisin-y,  elegant, and polished Port-style dessert wine. This is lacking the obvious peppery spice of Port, of course, but has enough violets, licorice and dried fruits to make up for it.