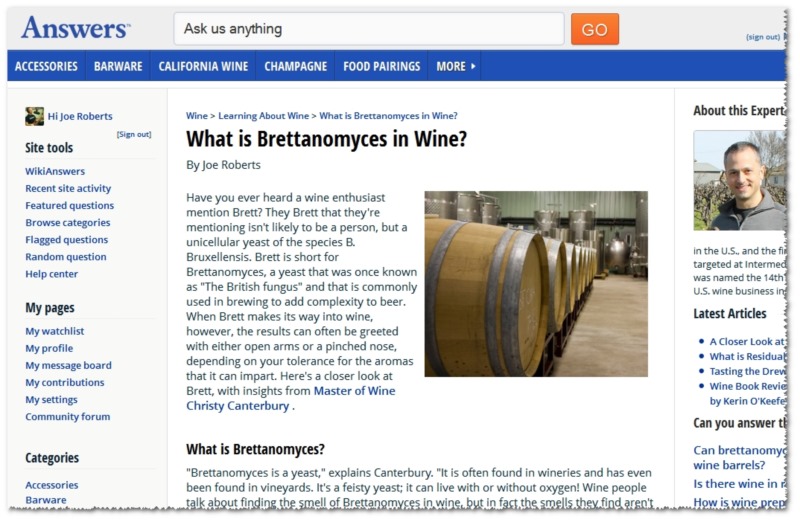 I’ve long waged a sort of mini-war (no height jokes!) on brettanomyces. 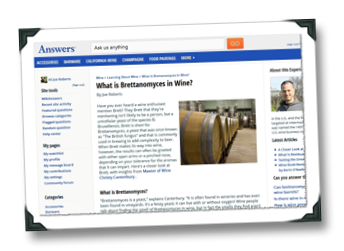 Equating it to barnyard, horse sweat, and Band-Aid stinkiness in vino, as someone who’d personally rather go for the naked, unabashed, nowhere-to-hide purity of wines like Mosel Riesling over the bombast of overdone modern red wines, I hated how Brett buried wines in its heinous off aromas.

Or so I thought.

It turns out that I actually like Brett aromas, and that my previous stance on Brett equated to blinkered, philistine, pig-ignorance on my part. That’s the conclusion to which I’ve come after chatting with Master of Wine and all-around vino bad-ass Christy Canterbury.

After watching a replay of Canterbury’s webcast on Brett for the French Wine Society, I was so shocked-and-awed that I asked to feature her in a quick introduction to Brett for my Answers.com gig (graciously, she agreed).

It turns out that Brett is not only responsible for much, much more than Band-Aid, horse sweat, and sheep excrement (which I hate) in wine, but also in some cases imparts several other more pleasant aromas like  bacon (which, of course, I like, because everyone likes bacon).

Now, I knew that already, but what I didn’t previously know turned out to be downright revelatory for my future wine enjoyment. [ Editor’s note: I am quite sure that some of you geeks are going to laugh heartily at the fact that I didn’t know this already. Cut me some slack, I’m not a winemaker, nor am I a chemist (my PhD-holding older sister is, though). For those geeks among you who do not want to cut me the requisite slack, I’ve got a middle finger to which you need to be introduced.]…

Anyway… What Canterbury revealed in the FWS webcast (but which didn’t make it to the Answers.com article) are the ratios of “good” Brett aromas caused by 4-ethylguaiacol (4-EG) to “bad” Brett aromas from 4-ethylphenol (4-EP). Both are volatile phenols readily synthesized by Brett during fermentation.

Specifically, the ratio of “bad” 4EP to “good” 4EG can be about 10 to 1 generally in red wines, but like all things wine-related, it just ain’t that simple. According to Canterbury, that ratio can be found as 8 to 1 for Bordeaux style red blends, 3 to 1 for Pinot Noir and an “astonishing” 24 to 1 for Shiraz (I don’t know about you, but that last one sure as hell explains a lot to me… talk about a light-bulb moment…).

As Canterbury put it, “if you want to play with the good stuff  [as a winemaker], you might be getting a lot more of the other stuff than you might think.”

What’s most shocking about all of this for me personally is how many of the good Brett aromas I like. Love, even. It’s humbling; I’ve now found myself in a position of having to retroactively add a caveat to all my (numerous) previous Brett diatribes, in that I’ve been bitching about the (admittedly much more prevalent) bad Brett only, when its good counterpart has been providing me years of drinking enjoyment.

As for whether or not Brett should be considered part of terroir, Canterbury’s quick “it’s really not” about sums it up for me (I agree – Brett can live in the wooden doors of your winery, but so can termites, and they’re not terroir, either).

The Brett talk is a long way of getting around to this week’s wine, which is made by my friend and Postmodern Winemaking author (and general wine biz iconoclast) Clark Smith: 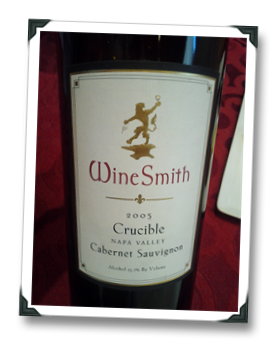 So why are we talking about Clark’s icon-series red blend? Because I tasted it (all classy-like, from Styrofoam cup) during a break at the 2013 California State Fair commercial wine competition, at which Clark was also judging. According to Clark, this wine is practically oozing with Brett. “There’s a ton of Brett in this,” he told me when we tasted it. “It just doesn’t show, because of how the elements all interact. It’s like this: you can have diamonds, and you can have coal; it all comes down to the structure.” Clark meant “structure” as in chemical structure, not tannin or acid structure for aging. And so the Brett rabbit hole goes even deeper, in that you can actually have a higher good/bad phenol ratio going on, and at relatively high concentration, but not have the “bad” stuff manifest.

The wine itself is chewy, powerful, dark, but with clean lines of acid running through it, along with a lovely herbs-and-spices complexity. It’s an embryo now, ready to awaken like Solomon Grundy in the Batman series and kick you all over the place (in a good way) by unleashing X-box style combat takedown combos of flavor and depth on your ass. As for the Brett content, I’ve got to take Clark’s word for it since I didn’t have access to a lab at the time. I’ve no idea how that Brett will bloom (or not) later in the bottle, but even at the steep price I’d be willing (the blasphemy!!!) to chance it based on on how good the wine is now.

28 thoughts on “Brett May Not Be The Enemy (Talking Brett With MW Christy Canterbury, And Tasting WineSmith’s Crucible)”