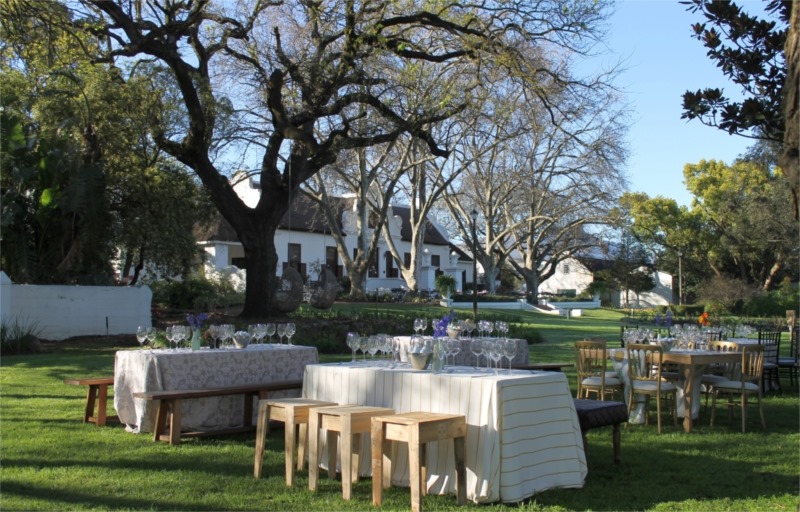 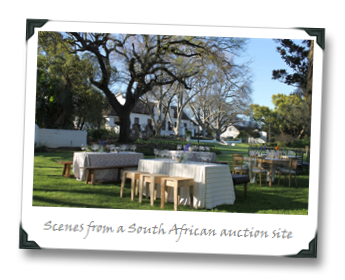 As in, shot-themselves-in-the-foot-and-will-be-limping-through-the-U.S.-wine-market-for-a-few-more-years underpriced. Which means that exciting bargains exist for the budget-conscious wine lover who’s willing to seek out the best wines from SA.

That’s the big take-away for me from my time speaking at the 2013 Nederburg Wine Auction near Cape Town earlier this month. Of course, some touring of the region’s wineries went down on that trip as well, so there will be some features on the best of those visits coming your way here over the next few weeks. For now, I’d like to focus on some of the highlights of what I tasted during the two days of the Nederburg Auction itself. 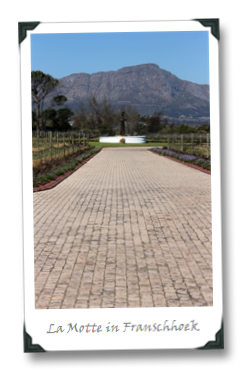 Not all of these wines will be available in the States yet (alas), but those that are generally have price tags that goofily belie their quality and pleasure-inducing vinous super-powers Clark Kent style, which means it’s like bear-market prices on some very, very nice wines for those now in the market for the best that SA has to offer.

For the sake of the lovely people making wine there – many of whom I now consider friends after breaking bread, cracking corks, and eating strange game meats with them – I’d love to not have to say that about how they’ve priced their wares, and would love to say that their wines will command the prices that similar quality would demand from other regions… BUT… it just ain’t so.

The truth is that SA in a crappy situation market-wise on that front, and the declining value of the Rand versus the dollar and the euro isn’t going to help matters much. And of course they already know all of that, so this isn’t news for them – but it does mean potential bargains for you, if you’re the open-minded wine drinking type… 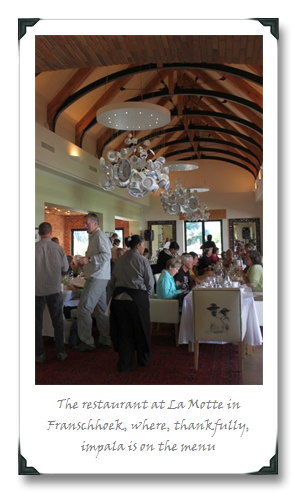 Part of the bargain, apparently, is longevity. Not all of the wines last (some styles of Chenin Blanc are notorious for petering out within about a year), but I tasted some auction lots that dated back decades and were still drinking well. An example: the Zonnebloem 1973 Cabernet Sauvignon that auctioneer Anthony Barne and I tasted at Neethlingshof with not-yet-born-then-but-now-Zonnebloem-winemaker Deon Boshoff was all rum and spices, tart plummy freshness, forest floor and herbs. Maybe a tad past its prime, but not by much. And you could have done a lot worse than the `82 Uitkyk Carlonet Stellenbosh Cabernet that we tried, which had gone from modest duckling to toasty, leathery, spicy, tart, mineral-driven & cigar-laden swan. 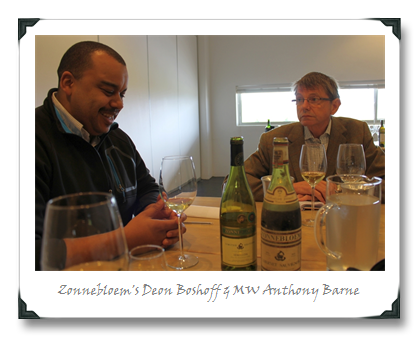 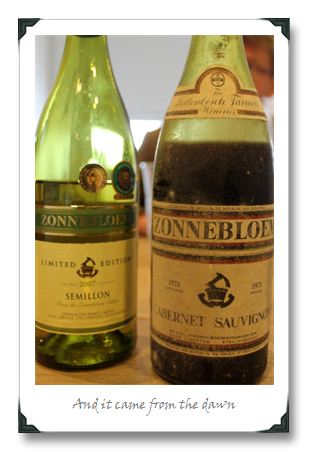 But those were more then, and some of the most interesting wines were more now (though in some cases, not significantly more). Here are the ones that most stuck with my sensory memory post-auction (more auction wines reviews will be coming via the mini route, so stay tuned). 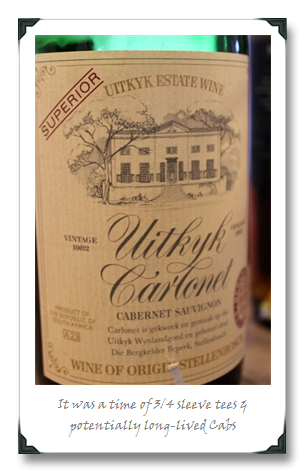 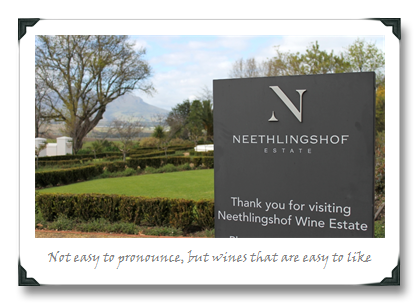 About four thousand bottles were made of this low-on-the-sulfur but high-on-the-leesy-yeast-and-freshness beauty. I’m beginning to think that Elgin is the place to be if you want to accentuate Chardonnay’s more elegant, crisp apples side, because…

…that elegance was also on hand for Paul Cluver’s Chard, a slightly older but equally fresh and maybe a bit more mineral-driven offering from vines that are around twenty years old. This one should be in the U.S. before the year is out. If you’re into multi-layered, refreshing Chard, you’ll want to out aside the twenty bucks and seek it out. 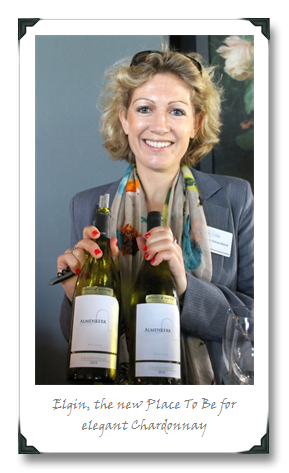 Alas… the kind of wine that would deliver incredible value if wine peeps in the States didn’t have lachanophobia over the aromas of peas and asparagus in the Sauvignon Blanc. Sure, when those elements are present in the canned versions, the SB usually sucks. But in their fresh versions? In this case, it’s superb; especially when mixed with a healthy dose of tropical fruits, graphite, and a crazy long finish. The freshness level? Off the charts, especially for an SB with 5+ years on it. It’d be an excellent pick for boutique shops, and/or for somms who want something with a good backdrop (it’s from one of the most southerly vineyards in the world). They told me it might go for something like $15 USD if/when exported.

Heady, honeyed, floral, rich, fresh, and nutty. Sounds like a blind date, I guess, in this case a very fun one. Combine all of that with a few green veggie notes and woolly funk, and you’ve got a nice alternative for someone looking for a touch of the exotic. They estimate this would sell for around $12 in the States, which would be a sick, sick bargain. 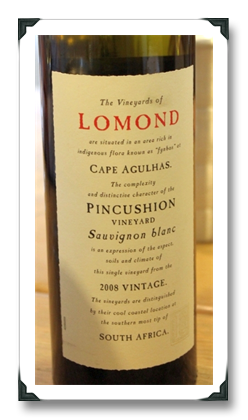 Everything that’s good about the Old School Steen from SA. Big, bold, creamy, woolly, rich, and full of minerals, texture, and attitude. There’s probably little coincidence that this brash, excellent juice is made by the outfit that’s owned by the equally brash and excellently talented Wendy Applebaum. Priced like they know what they’re doing (which they do).

The inaugural vintage, in which only one barrel or so was made, by the guy who asked me “how do we turn Chenin on in the States, Joe? I mean, really turn it ON!” Answer: make it like you make this Roussanne. Fresh, full of melon-y richness, and delivering tension by way of its biting, linear acidity. 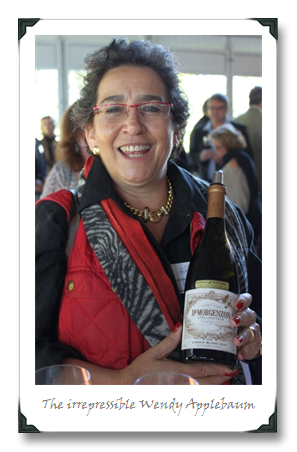 Hein Koegelenberg, husband of owner and famous mezzo-soprano  Hanneli Rupert-Koegelenberg (after whom this pricey red blend is made), is a guy with a serious head for business on his broad shoulders. Between La Motte and Leopard’s Leap, he’s overseeing an 8 million bottle per year production, and has hit the Chinese market hard and ver, very successfully. “The past eight years,” he told me, “I didn’t sell one bottle of wine in the U.S. It’s not easy to build a brand from a low price structure. Wine is becoming a commodity. As Robert Mondavi said, ‘you have to sell experience around the product.’” Unsurprisingly, he seemed to really dig my keynote speech theme of the importance of storytelling in selling wine. It’s really hard not to like this Shiraz, Grenache and Mourvedre blend, La Motte’s top of the line (particularly when you have it with impala!); like SA itself, it’s fascinating, opulent, complex, larger-than-life stuff. 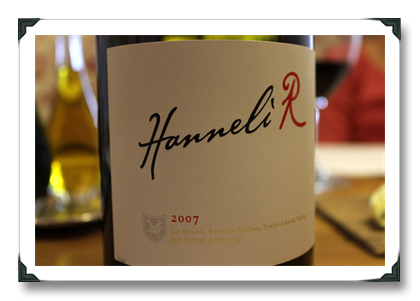 Don’t think twice about crossing this wine. It’s one of the most serious, richest, and loveliest of Stellenbosch’s Chenins, and one of its most screamin’ bargains. Right now, it comes off as disjointed and angular, but having tasted back to the 2000 vintage I can tell you that I wouldn’t put even a nickel down betting against this wine coming together nicely.