Many wine geeks realize that American wine is made in every state in the Union (though not always from grapes). 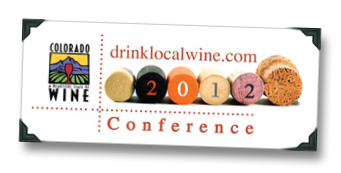 Far fewer of those geeky imbibers have actually tried a U.S. wine that hails from any states other than CA, OR, WA, or NY.

While I’ve certainly had my share of wine from “alternative” winemaking states, the majority of that experience has been with juice made in my home state Commonwealth of Pennsylvania. There have been some exceptions, of course – most recently a deeper dive into the mixed-bag of Virginia wine country as part of the 2011 Wine Bloggers Conference.

That’s a situation I’m going to change imminently, as this week I’ll be a media guest at the 2012 Drink Local Wine Conference in Colorado.

What do I think of Colorado wine? You’ll find out as soon as I do.

Do I have high hopes about the overall quality of CO juice? Not really.

But before all of you locavores flame me for selling out to the states with the already well-established production histories – or before the snobbier of you jump to any conclusions about all U.S. wine made outside of the Big Four states sucking donkey bong and want to lump me into your malformed opinions – please hear out the reasoning behind those limited expectations…

The reason my expectations are low is that the modern CO wine biz is nascent. If the modern VA winemaking scene is just coming out of its infancy, than states like CO are still vinous embryos.

I’ll certainly get a chance to put all of that reasoning to the test (and expose any subconscious biases!) during the conference’s very cool lineup of activities, which include (to the tape):

“A Colorado Twitter Taste-off, featuring two dozen of the state’s best wineries, on April 28, plus three seminars featuring some of the top names in Colorado and regional wine. In addition, DLW 20102 will host the Colorado Wine Challenge, where contestants will get a chance to blind taste Colorado and California wines and see if they can tell the difference.”

Now, the results of those blind tastings are just going to be damn fun no matter which way they turn out!

Do I hope to be pleasantly surprised by CO wine? Absolutely – I’ll be the first one singing the praises here of CO’s best juice, if that juice can stand toe-to-toe with the best stuff coming out of VA, NY, OR, etc. But to expect that CO’s industry is there yet would be wishful thinking bordering on the absurd based solely on the amount of time that CO has been making wine in a modern way (yes, I know they’ve been doing it on and off since the late 1800s, and in some cases in a modern way since the late 1960s – but even in that sense, they’re still behind VA!).

I want CO to bring the A game, just as I want all local wineries to bring their A games to anything (particularly to their consumers!). I certainly wouldn’t downplay a wine’s quality just because it came from CO, or VA, or anywhere else. I’m only saying that if/when it happens on this trip, it will fall into the “awesomely and pleasantly surprising” category of critical wine experiences for me.

My expectations are a matter of time and resources, people – nothing more. And while I certainly think we should encourage winemaking efforts in every U.S. state, I firmly believe that part of that encouragement is being brutally honest about the quality of each individual wine that crosses my lips when I’m in critic mode. Not an easy position to balance, but I’d rather take difficult and ultimately more rewarding road of keeping an open mind and juding every bottle by its own merit, than travel the easier but less rewarding paths of lambasting – or lionizing – any wine solely based on its location of origin.

More to come from CO, from where I hope to be sharing many surprises with you! In the meantime, got a view on CO wine that you want to share? Shout it out!