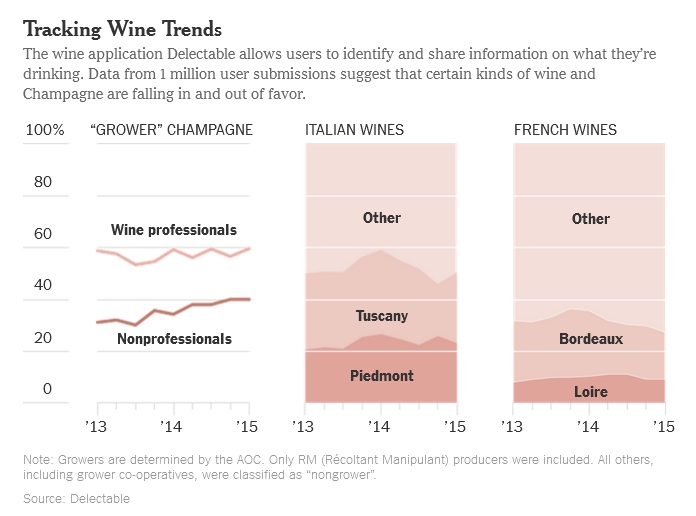 Last week, one of the nation’s only real newspapers (the New York Times) published a little piece about the popular wine review mobile app Delectable. What I found most interesting about the article was the discussion of Delectable’s user trend data with the company’s resident wine pro, Julia Weinberg.

Here’s a look at the Delectable data as graphed by NYT:

And here’s what they had to say about wine consumption trends suggested by those data:

“…wines from the Loire Valley in France and Piedmont in Italy — again already favored among the wine pros — have become slightly more popular among regular users, while interest in the typically bolder wines of Tuscany and especially Bordeaux has fallen. Ms. Weinberg said that does not necessarily mean that drinkers are souring on Tuscany and Bordeaux but rather that they are consuming a broader array of wines. ‘It’s always a tricky question,’ she said. ‘Are these kind of higher-acid, lower-alcohol hipster wines taking over? Or is there just so much more access to a greater diversity of wines? One of the reasons why wine is so exciting these days is there’s so much more in the mix.'”

I’ve got a problem with this.

Not because I question the data, but because we have people referring to higher-acid, lower-alcohol wines as “hipster.” It’s not hipster if it’s already mainstream, folks…

First, let’s clear up the semantics:

The trouble here is that we’re still viewing higher-acid wines as outside of the norm, when they easier to find at every price level than at any other point in the last two decades.

Not only that, but calling them hipster suggests that they are outside of the latest fashion, when higher alcohol, lower acid takes on wines are actually part of a previous trend in fine wine. The latest trend/fashion is higher-acid, lower-alcohol wine, folks.

You can challenge that view, of course, but it’s backed up by some very large producers who retooled their entire lineup of wines to cater to that trend. Over two years ago. Just sayin’.

Incidentally, the NYT article makes the mistake of seeing the Delectable user base as one big market, which has some value for sure but if you want to draw more relevant conclusions, carve the data up by market segments, of which there are several in the U.S. alone. You want to be hipster? Start peddling low acid, high alcohol wines in the big cities on each coast of the U.S.  That’d qualify you as a hipster in those parts. In Texas? Not so much.

So let’s not go too cray-cray on drawing conclusions from this just yet. I think Weinberg hits the bull’s eye when she notes that what the data most likely tell us is that wine is a more exciting field now for consumers than it’s ever been, hipster monikers be damned.