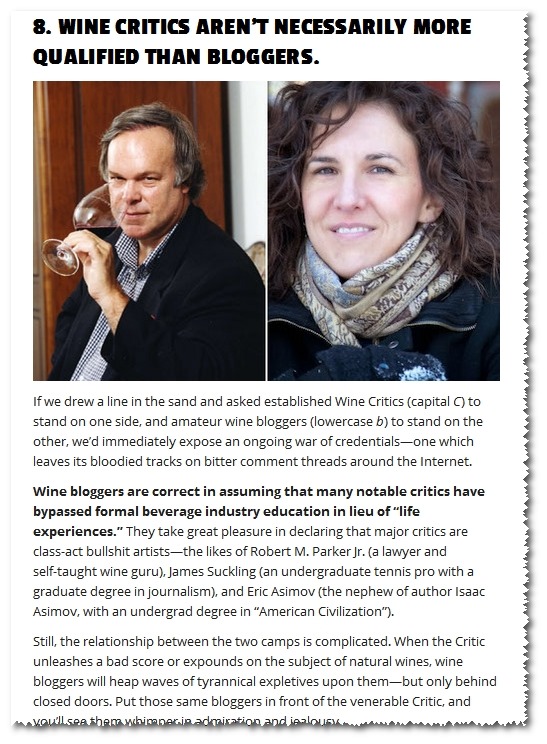 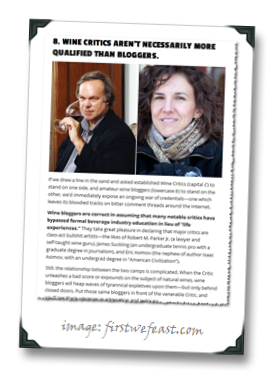 Yeah, the wine world is kind of small like that.

Anyway, the article is titled “10 Dirty Secrets of Wine (That Nobody Wants to Talk About)” and it makes for a fascinating, funny, and at times kooky read about some revealing but less-than-glamorous aspects of the wine trade in general (my personal favorite from the list, which is funny although it sells many bartenders seriously short: “Bartenders and mixologists don’t give a shit about wine”).

The item in which we’re mentioned is “Wine critics aren’t necessarily more qualified than bloggers,” which I am quoting below so you can get up to speed quickly:

If we drew a line in the sand and asked established Wine Critics (capital C) to stand on one side, and amateur wine bloggers (lowercase b) to stand on the other, we’d immediately expose an ongoing war of credentials—one which leaves its bloodied tracks on bitter comment threads around the Internet.

Wine bloggers are correct in assuming that many notable critics have bypassed formal beverage industry education in lieu of “life experiences.” They take great pleasure in declaring that major critics are class-act bullshit artists—the likes of Robert M. Parker Jr. (a lawyer and self-taught wine guru), James Suckling (an undergraduate tennis pro with a graduate degree in journalism), and Eric Asimov (the nephew of author Isaac Asimov, with an undergrad degree in “American Civilization”).

Still, the relationship between the two camps is complicated. When the Critic unleashes a bad score or expounds on the subject of natural wines, wine bloggers will heap waves of tyrannical expletives upon them—but only behind closed doors. Put those same bloggers in front of the venerable Critic, and you’ll see them whimper in admiration and jealousy.

The Critic is well aware of this duality, and several of these esteemed scribes take great pleasure in lashing out against people they consider to be amateur fluff writers. In truth, many amateur wine bloggers are anything but amateur, having earned legit credentials from industry-lauded institutions like the Wine, Spirits & Education Trust (WSET), the Society of Wine Educators, or The Guild of Sommeliers, and many of them contribute articles to the very publications that major Critics write for — folks like Joe Roberts of 1 Wine Dude; David White, who founded and edits a daily wine blog called Terroirist; Elaine Chukan Brown of Hawk Wakawaka Wine Reviews; and many others.

Does formal education trump life experience? Do professionals owe it to their readers to earn a formal degree? Who, then, is rightfully deserving of the title “Critic”?

Having been kindly cited by JC as an example of someone on the (little b) blogger side that’s earned “legit credentials,” I figured that I should weigh on some of the heavy question bombs that he threw out at the end of that section.

Does formal education trump life experience? Do professionals owe it to their readers to earn a formal degree? It will probably come as a very anticlimactic pseudo-shock that my general answer is “No; it doesn’t matter.”

Preferably, you’d combine some version of the two, which is what I think helps to turn knowledge into expertise, and then expertise into wisdom.

But just as it does not necessarily follow that someone who studies a topic could master it in practice, it doesn’t follow that someone who doesn’t formally study it should immediately be labeled a bullshit artist. I don’t think I’d want to go up against Parker’s palate, as subjective as it arguably might be, because the guy’s spent the last umpteen years visiting wineries, and tasting wines. To suggest that he has not gained serious insight into the details of how wines are made worldwide is, to put it bluntly, delusional.

Just as delusional, in fact, as assuming that someone who studies and tastes wine in their own time, and obtains legitimate creds, can claim inherent superiority on the subject over someone who has not done the same things.

I think if you don’t formally study wine and the art of tasting it, and you have any hope of being an authoritative voice on the subject, then you’re starting with a potential handicap. But handicaps can be overcome, and the results often judged accurately in the courts of professional respect and public opinion.

15 thoughts on “Are Wine Critics More Qualified Than Wine Bloggers?”