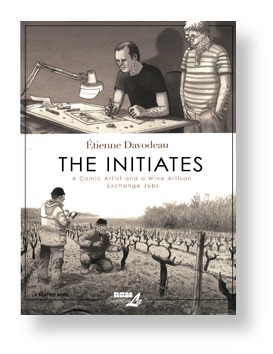 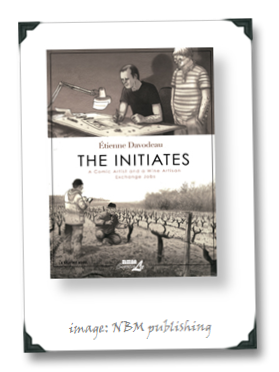 Some people may decry real-life style comics, in favor of broader, deeper themes or bombast (both of which are present in seminal works like The Watchmen – a reading assignment that, in an almost symbolic bit of irony, puts Leroy to sleep at one point in The Initiates). I dig those, of course, having cut my comics teeth on Spider-Man and X-men at the times when they were just introducing what were then cutting-edge dramatic themes of psychological abuse and societal prejudices. The late Harvey Pekar’s American Splendor was my first introduction to comics that put those themes front-and-center without any bombast, relying solely on the storytelling to get them across to readers.

The Initiates is completely in that vein. There is no real “drama” here aside from psychological drama, such as the opposing viewpoints of arguing winemakers when they drink together and discuss natural versus conventional winemaking. It sounds droll, but if you’re geeked out about wine you will find those viewpoints stirring up deeper emotions, and may even have your viewpoints challenged after reading some of the words uttered in The Initiates by the winemakers at places like the much-lauded Corsican producer Patrimonio (I was happily surprised to see that inclusion – their white wine made my Top 10 Most Interesting Wines of the Year list in 2012). And don’t even get Leroy started on big tasting events such as Salon des Vins de Loire. 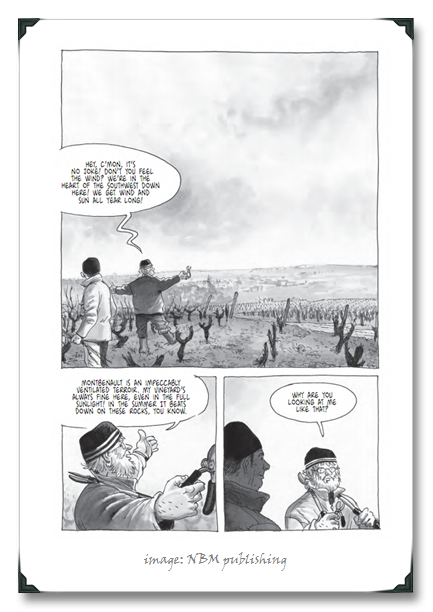 The parallels between the world of comics and winemaking as explored in this graphic novel are striking (I sometimes marvel that any fine wine ever makes it to a store shelf – after finishing The Initiates, I felt the same way about independently-published comics!). Sometimes, Davodeau  gets heavy on the text, as when various winemakers are arguing finer points of biodynamics, but at other times – and this is when the work really shines – he lets the real-world actions speak for themselves.

Case in point: there’s an extremely awkward encounter between Leroy and Wine Advocate staff critic David Schildknecht in which Leroy totally ignores Schildknecht’s reticence at visiting the Montbenault vineyard site, insisting that the wines cannot be appreciated without visiting the vines. The funny and embarrassing exchange that ensues says more about the divide between critics/tasters who prize arm’s-length detachment and those who insist on deeper context than almost any article I’ve ever read or speech I’ve seen given. And that’s a testament to the power of comics as a medium for storytelling.

I suppose the highest cimpliment I can give to this work – and the reason that I’m recommending it – is that by the time I’d finished The Initiates, I’d felt as though I knew Davodeau and Leroy, and could somehow voyeuristically participate in the unlikely bringing together of their kindred spirits. Great wine can bring us together like that; and, I suppose, so can great comics about great wines, and the folks who labor to produce them…

8 thoughts on “A Wine And Comics Still Life: The Initiates”