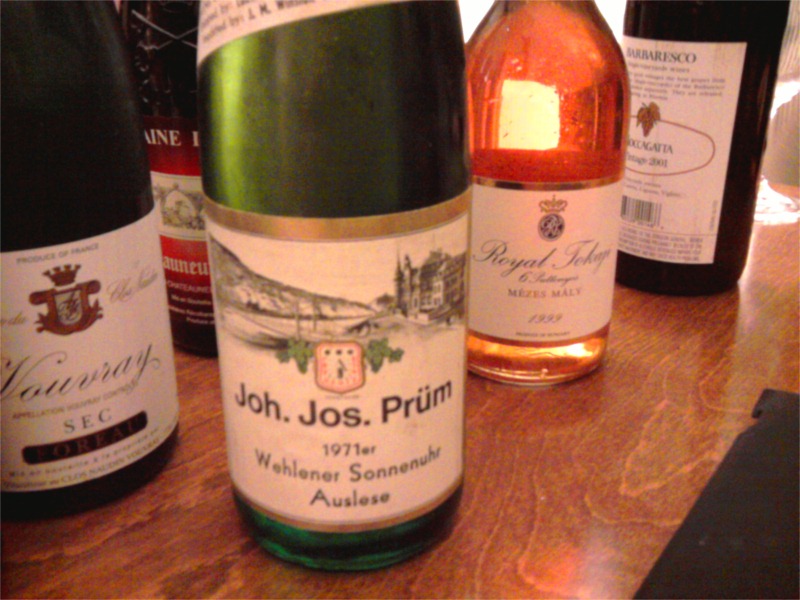 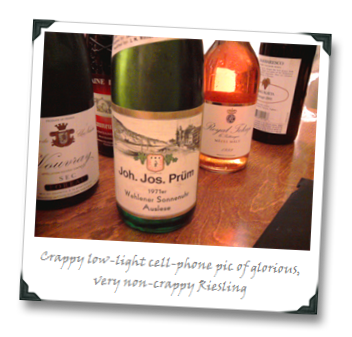 When it comes to PPP wine imbibing, just as it should when good company is gathered over good wine, most of the thinking about day jobs and even of the world of wine should go right out the proverbial fenestra.  Geeks will be geeks, and I’m no exception, especially so when it comes to wine.  In those moments, it’s wine that matters, but also the enjoyment of it that matters, and the sharing of ideas that matters, too.  And if I had to chose between the wine and the sharing, personally I’d put the emphasis on the latter.

I was fortunate enough to hang out with a convivial and varied cast of wine characters the night I tasted that 1971 J.J. Prüm, and their shared reactions, wit, commentary and sharp insights made that wine taste better than it ever possibly could have on its own.  Not that I’d refuse another opportunity to taste it even if I was by myself, mind you… in fact I’ve had no fewer than three dreams about that wine since that party… but you get the idea.

Doug, Alder, Jim Gordon, Jon Bonne, Claudia Perry, Ben Weinberg, Dave White, Blake Gray… there were others there… the point is that it doesn’t take a large stretch of the imagination to picture the camaraderie that develops when you’re geeking it out with the geekiest of wine geeks over especially tasty, geeky wines that get geeks geeky all over. And I loved it.  I loved the geeking out  more than I loved the wines, I think.

Because wine, as they say, is the ultimate social beverage, and nothing makes a great wine (or even a not-so-great wine) greater like great company.

The moral of the story?  Stop and smell the petrol once in a while, people, and make sure you do it with friends.

4 thoughts on “Zen Wine: 1971 J.J. Prüm And The Greatest Of Wine’s Gifts Outside The Glass”