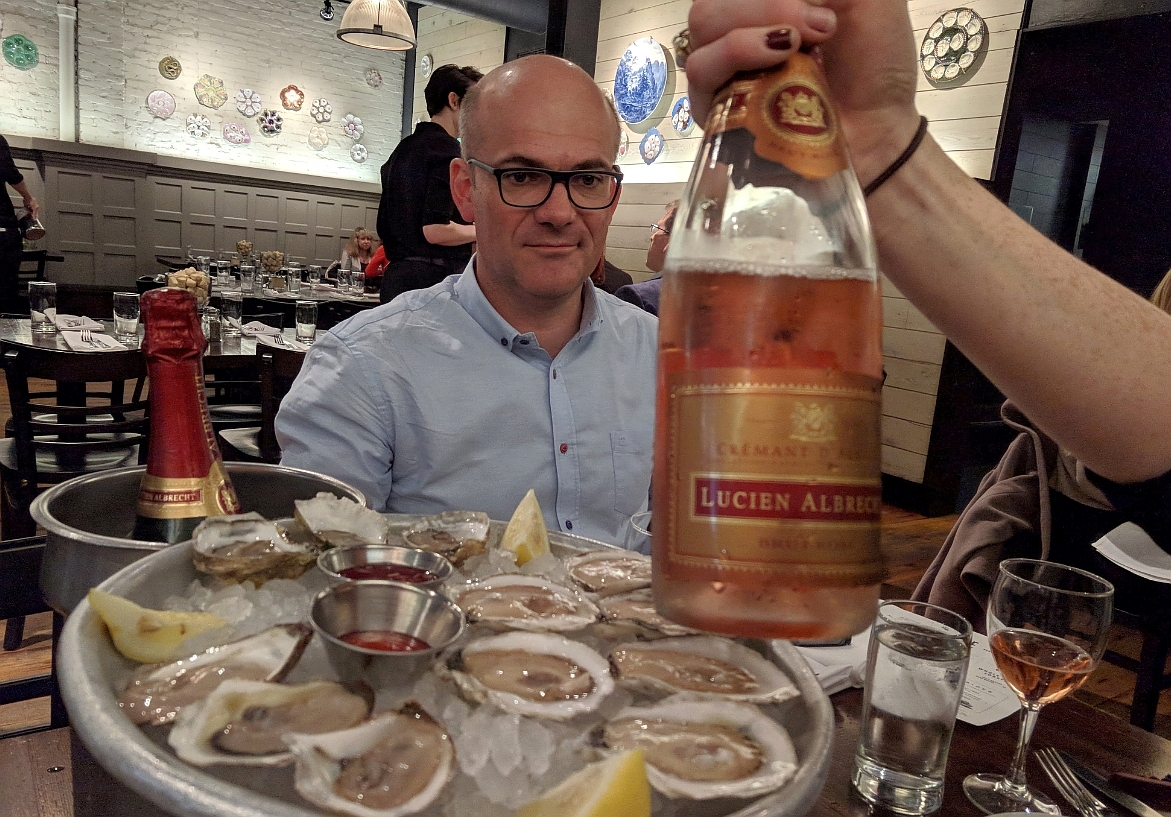 Not too long ago – ok, well, actually, several months ago, but I’m just getting back around to the topic now because I’ve been busy being all self-employed and day-drinking and what-not – I was invited to lunch with the dry-humored Jérôme Keller, Technical Director/Oenologist for Alsace stalwart produce Lucien Albrecht. Now, it hasn’t been all that long (especially by my warped standards) since I devoted quite a bit of the virtual page space here on 1WD to Alsace, but when you’re a wine-geek-turned-critic-type you don’t turn down an opportunity to a) get reacquainted with one of the first three Alsatian firms to have helped launched the Crémant d’Alsace AOC (which, like me, dates back to the early 1970s), which now comprises about 70% of their total production; and b) eat at Phlly’s Oyster House restaurant.

So, yeah, I did those. And while it’s taken me a few months to get around to writing it up, if you consider that we’re talking about a producer whose Alsatian roots can be traced back to 1698 (when Balthazar Albrecht settled in Orschwihr) and whose winemaking roots date back to 1425 (when the impossibly-impressively-named Romanus Albrecht started the winery), then I think I can be forgiven for some tardiness, especially from that timeline perspective.

Anyway, Keller has done some work in the USofA, having participated in harvest at Sonoma Cutrer, so he understands (or at least is adept at faking to understand) what passes for American humor, so we got along swimmingly, popping shellfish and tasting through some of the more recent Albrecht wares (and yes, the food/wine match went as lovably, gluttonously well as you’d expect)…

Almost no one has been doing Cremant in Alsace as long as Lucien Albrecht, and that long-standing experience is evident in this lovely, 100% full-bunch-pressed Pinot Noir bubbly, which spends about 14 months in the bottle. “Our style,” noted Keller, “is to have bright red fruits.” Mission accomplished; you get lots of red berries here, an admirably rich palate, and a finish that’s longer than you’re paying for at this price point. 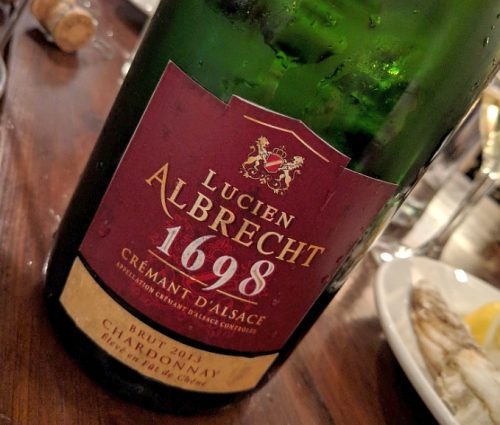 A new release, meant to showcase the “linerality” of their Chardonnay, according to Keller. Barrel aged and fermented, with malo and lees action for three years in the bottle, this sparkler is made form grapes that are selected from primarily limestone-soil vineyards. The result is intensely floral and toasty on the nose, and yeasty, peachy, perky,and textural in the mouth. It’s the kind of bubbly that makes it very, very difficult to not drink half the bottle embarrassingly quickly. 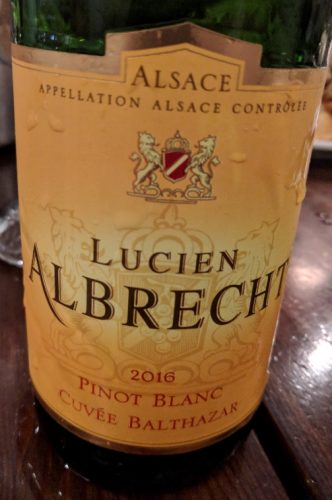 Albrecht wisely (ha-ha!) grow their PB in a warmer area of their Alsatian vineyards, and add a bit Auxerrois to the final blend; what you end up with are the tropical and melon aromas you’d expect, a pleasantly plump and sexy mouthfeel, and an underpinning of astringency and lift. Think white fish recipes for dinner. 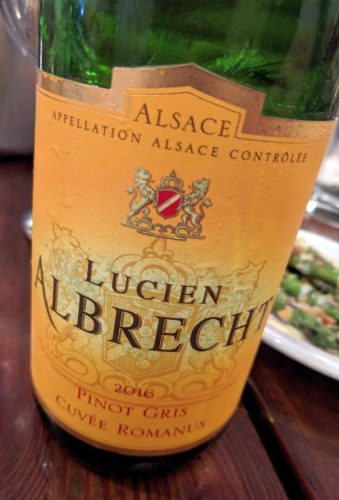 Melons, stone fruits, citrus pith, astringent “bite,” great acidity, and a touch of mesquite honey… I kind of fell in love with this PG, which will wistfully make you lament as to why so many domestic US PGs taste like flat melon soda compared to stuff like this. Bear in mind that the Roman could use a couple more years of rest, to help all of that complexity meld with its ripe fruits flavors. 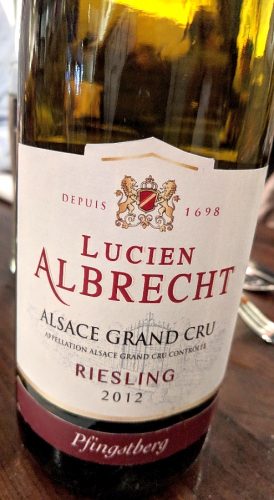 Damn… this is good. The Pfingstberg Grand Cru vineyard has been renowned since at least 1299; ranging in elevation from 270 to 370 meters, the soils are chalk and micaceous sandstone (depending on the aspect). The key thing to remember about Pfingstberg, in this author’s experience, is florals: a plethora of perfumed blossom aromas await, including lime, along with a host of other things for which Riesling is so (justifiably) lauded by nerds like me (saline, mineral, stone fruits, pith, toast, pear, spices…). The finish is long, salty, and flinty, and even breaking thirty clams (ha-ha!) this GC is kind of a bargain.

Keller describes the southern-facing vineyards that source this Reserve wine as allowing for “aromatic ripeness” from which the resulting fresh-bouquet-of-roses floral characters derive. That, and almost maddening levels of winemaking patience (“we press, we wait; we press again, we wait…”). Like trying to avoid hyphenated phrases in this article, you’d be hard-pressed to find a more tried-and-true example of Alsatian Gewürztraminer; rose petal, lychee, toast, all moving to mineral, silkiness, and tell-tale mixture of pleasing astringency, structure, and a juuuust enough lift. The whole experience is harmonious, too, right through to the (not short) finish.