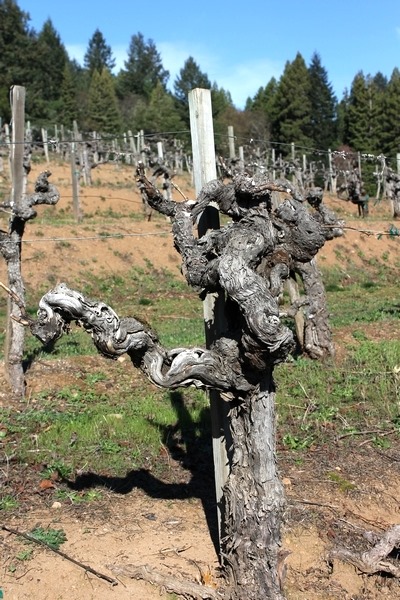 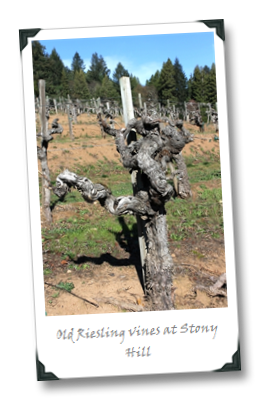 Peabody’s Wayback Machine has got nothing on the steep, two mile drive from Napa Valley’s Bale Grist Mill State Park up to Stony Hill Vineyard. Brave that vertical, moss-covered tree-lined climb between St. Helena and Calistoga, and in many ways you’re transported at least forty years back in Napa time, and to what seems an entire world away from the Disney-fied scene of the opulent temples of vino-ness that pervade Route 29.

Feel free to insert your own clichés about technology being the only indication we’re living in a modern age when touring this winery’s weathered but functional buildings and it’s gnarled old Riesling vines. They’re pabulum, sure, but in this case also apt (I was warned to plan on no cell phone coverage when I reached the top of their road; the Wayback machine renders that inoperative, I suppose).

“This is the land that Napa Valley Time forgot,” mused Sarah McCrea, the former corporate marketing brand director who, in 2012, stopped fighting the inevitable call of becoming Stony Hill’s third generation proprietor. “And we like it that way.” 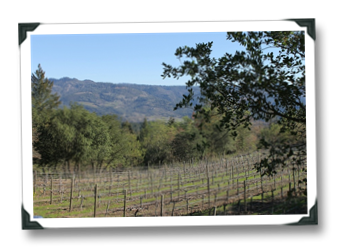 McCrea’s grandparents, Fred and Eleanor McCrea, bought this little chunk of Spring Mountain in 1943, when it was a former goat ranch that “nobody seemed to want.” The first plantings happened “in `48, `49, after the war,” according to McCrea. Some Riesling vines from that era still remain on the property. A small winery was completed in 1953, and trust me when I tell you that, while charming and unquestionably setup in a beautiful place with a beautiful valley view, it would hardly qualify as garage-sized for some of the polished-with-gobs-of-cash winery façades just a few miles farther south on Route 29. Since that time in the fifties, almost nothing (thankfully, blessedly, miraculously) seems to have changed here. Case in point: in sixty years, Stony Hill has employed fewer winemakers than the venerable Pittsburgh Steelers have head coaches.

To put Stony Hill in perspective, one has to understand that when they started in the wine business in Napa, there was no perspective. There wasn’t even much of a Napa fine wine business. There’s is a tale that, as Morrissey sang, starts “from before the beginning…” 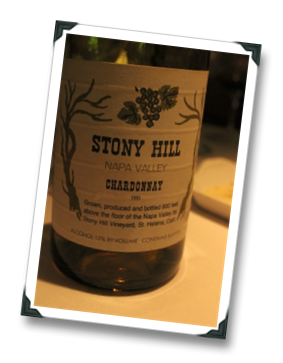 At the time Stony Hill was planted, Napa County boasted a mere ten wineries. The McCreas “planted what they personally liked,” Sarah McCrea told me as we walked among some of the old soul Riesling vines. “UC Davis told them not to plant Chardonnay, because at the time it was considered ‘untested.'” Thankfully for lovers of elegant wines, the McCreas didn’t listen.

Consider Michael Mondavi, who, in founding Robert Mondavi Winery in the 1960s with his famous kin, has just about seen it all when it comes to the growth of the Napa Valley wine industry from eager and independent podunk farming to adult wine Disneyland. Mondavi told me this when he found out I’d been visiting Stony Hill: “that was my early model for Chardonnay in Napa Valley.” Or what Casa Nuestra’s Gene Kirkham, who’s been in the Valley since the early 1970s, said to me about his brand’s early days: “we had, as an example to follow, Stony Hill.” It’s not really an exaggeration to say that without Stony Hill, we wouldn’t have Napa wine as we know it today. 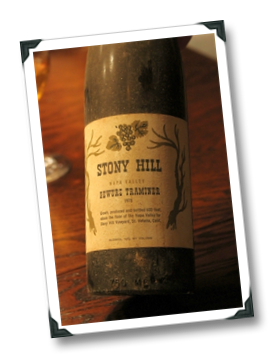 As Napa evolved, and grew in the largesse of its wine styles, the largeness of its size, and the loftiness of its profile, Stony Hill simply kept on keeping on, crafting steely, focused and elegant white wines that in some vintages can be among Napa’s longest-lived. About the only thing that’s changed was a handover of winemaking duties from Fred McCrea to Mike Chelini; and they have almost identical winemaking styles (oh, and, after about sixty years, the addition of a Cabernet Sauvignon red wine). They remain a rarity of an estate outside of Europe, and even more of an odd bird by Napa standards; a 3500 case, forty acre winery that shuns malolactic fermentation, minimizes new oak, and has never really wavered from its lower-alcohol, subtle, and not-gonna-be-ready-for-sipping-for-another-five-years-or-so style.

Sarah McCrea summed it up to me this way: “We’ve basically made the same wine the same way every day since we started; that’s the secret to our consistency.”

I’ve tasted a number of older Stony Hill wines, some decades old (see a few examples in the inset pics). They’re not always still fruity, buy they are always, at a minimum, intellectually compelling (and sometimes downright glorious). The icing on the cake is that in effectively standing still from a trend perspective, Stony Hill is kind of cool again, and the wines remain overachieving, elegant alternatives to the Valley’s more prevalent bombastic wine stylings. The Wayback machine could, as you’ll see in the tasting notes for their recent releases below, do you a lot worse.

2012 Stony Hill White Riesling (Napa Valley, $27)
Reserved, mineral-driven, and deep on the citrus fruits. Yes, limes can be “deep.” It’s not trying to be Rheingau, but it gives a similar sense of wet stone steeliness and austerity, its stern disposition reinforced by a pithy structure. And it’s a baby; a stern, beautiful baby.

2012 Stony Hill Gewürztraminer (Napa Valley, $24)
Where the Riesling is stern (did I mention stern?), this is a bit more flamboyant, but a reserved take on flamboyant. Lychee, flowers, hints of saline and stones are the greeters, followed by mouthfuls of tropical fruits and a line of acidity that wants to hang a Do Not Disturb sign on the bottle neck, lest you forget that this wine will really start coming together a few years hence. 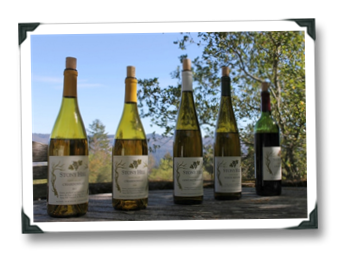 2011 Stony Hill Chardonnay (Napa Valley, $42)
White peaches, stone fruits, flowers… and it’s tight as a drum right now, though it’s also paradoxically lithe and deep simultaneously right now. Gorgeous, but making a move right now on her would ruin the moment and break some of the romance of anticipation. If you want an impatient sneak peek under the lingerie at how this might develop, try the 2008, which is now heady, floral, honeyed, hinting at spices and marzipan, but still linear, and drinking beautifully.

2010 Stony Hill Cabernet Sauvignon (Napa Valley, $60)
Made from 2004 plantings at the west-facing, highest elevation spot on their property, this is Stony Hill’s second vintage of Cab. Peter McCrea described the Cab’s soils as quick-draining and “so red that you can see it from 25,000 feet.” The wine is pure, vibrant stuff; currants, spices, tomato leaf, earth, and a sense of poignant and to-the-point honesty.

2011 Stony Hill Semillon de Soleil (Napa Valley, $30)
Just as Stony Hill’s take on Cab is exactly the take you’d expect from them, their 100 case take on passito, sun-dried style dessert wine is exactly what you’d expect from them, too. Juicy, full of lemon drop aromas, and enough raging acidity and liveliness that the sugar seems more loving kiss than the full-on, French-kissing spectacle that is most flabby NV dessert wines. The finish lasts almost as long as some of their Chards can age in bottle…