My sister (a chemist) recently sent me an e-mail requesting some wine advice:

Why this is has a lot to do with chemistry (lucky for me my sis is a chemist!). Which is one of the many splendid things when it comes to learning about wine – wine exposes you not just to the sensory pleasures of drinking it, but to the art/magic of constructing a good one along with the chemistry, agriculture, geography, and geology that go into making good wine. Lucky for you Dude has already done his homework in these areas (otherwise he’d have failed all those pesky wine certification exams…), so you don’t have to!…

But before we delve into the chemistry, let’s examine a bit of background on the whole wine / sulfite thang:

My sister’s coworker has reason to be concerned about sulfites, if that coworker is allergic to them. That’s because for those people, having exposure to sulfites in drinks and food can cause a severe (and in very rare cases fatal)asthmatic reaction.

But before you start pouring all of your fine wine down the sink drain, you should know that only 0.01% – 01.0% of the U.S. population is estimated to be allergic to sulfites (probably fewer than 1 in 100 people).

If you’re even an occasional wine drinker, chances are that you’ve heard the rumor that sulfites in wine cause headaches. Despite being popular in the rumor mill, there is no scientific evidence to suggest that ‘wine headaches’ are caused by sulfites. In face, if you do get headaches when drinking wine, chances are higher that the headache could be a reaction to any of several esters (flavor compounds) that occur naturally in wine.

Chances are greater still that you simply have a hangover (so drink more water next time, my party-loving friend, or – egads! – drink less wine).

Now back to the chemistry – sulfites are produced naturally during the fermentation process (so you probably are exposed to them in some beers, soy sauces, and other fermented liquids). The amount produced naturally is pretty small – anywhere from 6 to 40 ppm (parts per million). PPM is roughly equivalent to 1 milligram of something in 1 liter of water. Another way to think about it – 1 ppm is about 4 drops of ink in a 55 gallon barrel of water. Dangerous if you’re talking about arsenic, but not so much when you’re talking sulfites.

U.S. government regulations stipulate that wines containing 10 ppm or more of sulfites need to display a warning on the bottle, in order to alert consumers that are allergic to sulfites. Since more than 10 ppm are created during fermentation, and given that the labels don’t have to specify the amount of sulfites the wine contains, that pretty much means every bottle of wine needs to carry the warning – effectively making the warning a bit useless and confusing consumers that may not be allergic to sulfites but want to buy wine that has minial sulfite content. 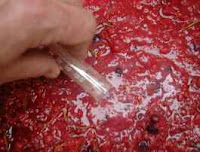 Sulfites are also added during the winemaking process, which can up the ppm of the sulfites in your wine (the U.S. government allows up to about 300+ ppm). Why do winemakers do this? They’ve been doing it for hundreds of years – the first historical record of its use in winemaking is from a royal German decree in 1487 – in order to kill bacteria, prevent browning of wine form oxidation, and to help stabilize the finished wine. The 1487 decree specifies use of about 19 ppm of sulfer, which according to wine writer Hugh Johnson (in his Story of Wine)is an “improbably low” amount.

Some winemakers – mostly those making biodynamic / organic wines – deliberately avoid adding any additional sulfities (beyond those naturally produced during fermentation, of course). My personal thoughts on the current low quality of most organic & biodynamic wines aside, there are some quality producers out there who are trying to make great wines biodynamically, which are also ‘lower-sulfite’ wines (usually 100 ppm or less). A fine example is Frog’s Leap – lower on sulfites, big on taste, and good for the environment to boot.

A final word of caution – when shopping for ‘low-sulfite’ wines, don’t expect to find a long list of great-tasting options. So when you find a few that you do like, stick with ’em!

Those looking for a bit more on the topic of sulfites in wine should check out this handy reference from UC Davis.