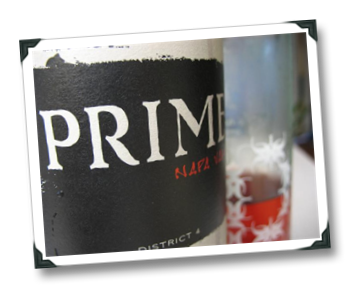 I was going to write about two wines that I tasted last week while I was in in Napa & Sonoma for the Wine Bloggers Conference… technically I was actually (sweltering) in Tacoma when I tasted them, but I received the wines in Napa & Sonoma…

The wines in question are C. Donatiello’s Rose, and the new 2006 release of Prime Cellars’s Cab.  Both of them are very, very good wines, the kind of wines that I want to get to know and want others to get to know – small production, interesting, made by up-and-coming, passionate winemakers who are tweaking things, trying to find the right balance and improving their wines early on with every vintage.

The thing is, I’ve been wondering if I should write about these wines.

Because chances are that you can’t get them…

Here’s my take on the C. Donatiello Rose:

You probably can’t get it unless you’re in Headlsburg, and are a friend of the winery, because Chris Donatiello doesn’t sell that wine – which is a pity, because it rocks.  I’m getting increasingly impressed with what Chris has been able to achieve in terms of quality across his entire spectrum of wines (Chardonnay and Pinot Noir at the moment) in such a short amount of time.

Prime Cellars is another CA producer (Napa this time) that I’ve been keeping my eye on, and I managed to meet up with winemaker Ted Henry at his ‘day job’ at Jarvis before the kick-off of the WBC.  I’d written about Prime’s inaugural release last year, and after tasting their 2006 Cab I think that Ted has started to hit his stride in terms of what he’s aiming for in Prime:

06 Prime ‘District 4’ Cabernet Sauvignon (Napa Valley): Big & about as classic & concentrated black cherry as you can get. Bravo! #

At least the Prime can be ordered on-line, and shipped to one of the (few) states that will allow you to do that.  Otherwise, you’re going to have to hit some restaurants in the Napa / Sonoma area to try it.

Most wine writers probably get faced with the question of whether or not to write about wines that are difficult for their readers to obtain. As wine bloggers receive larger and larger volumes of samples, we’ll be faced with this question on a more regular basis, since statistically speaking the chances are fairly high that we’ll get wines that are harder to come by at a local wine shop.  Take Napa, for example – according to the Napa Valley Vintners Association, while Napa’s wine industry accounts for 34% of CA’s wine economy (responsible for about $42 billion of the U.S. economy annually), “about 70% of Napa Valley’s 400 wineries make less than 5,000 cases of a wine a year. 95% are family-owned.”  I other words, it’s the small stuff that add up to the big numbers.

Which brings me to the big question in my over-thinking mind:

I can’t imagine that highlighting these wines is useful for the average wine drinker who might be looking for a decent bottle of vino for dinner, or even to the enthusiast who would be interested in trying new producers (since s/he probably can’t get the wines outside of Northern CA).

But having said that…

I happen to enjoy reading about wines and learning about new producers, even if I can’t try those wines.  Because I’m a wine nerd. In my simple, nerdy view of the wine world, people need to know about producers like these, because their wines are probably going to get better over time, and it will probably be fascinating to watch (or taste) their progression.

So… I’ll probably keep writing about them.

Which means the real question is – Are *you* willing to read about wines that you (probably) can’t try?

I posed the question to the greater “twitterati mind” (a.k.a., my followers on twitter).   The result of this very quick and highly un-scientific poll were that people mostly did want to learn about wine even if it’s one that they might not be able to ever taste.  Seems that people, like me, just enjoy learning about this stuff. They also hold out hope that one day, they’ll be able to try those wines that they can’t access now.

PaDutchTravel @1WineDude ok, yes I still lik 2 read bout them, I can still dream and put on my wishlist. cuz u never no when u might be able 2 try some

PinotParty @1WineDude Sure, why not? Educate the wine-os. Love to hear it. If I’m resourceful enough, may even find a way to taste it as well.

AndrewSGHall @1WineDude Sure. Both cases (cost/availability) should only be seen as temporary. U also learn by seeing the limits of wine.

amaynard6 @1WineDude Sometimes. If it’s something spectacular and lives up to expectations, yes. If it’s anything less, no.

dfredman @1WineDude Not interested in notes on 1900 Margaux or 59 La Tache, but love to read about artisanal, eclectic, unusual and weird wines…

allaboutvino @1WineDude Yes! I can live vicariously through them. :)

christywild @1WineDude well, in my opinion, I wouldn’t say I wouldn’t be able to try them…I try and make a note and to find them later

LENNDEVOURS @1WineDude True geeks seek knowledge even if the wines are unattainable. At least in my never-humble opinion.

KathleenRake @1WineDude Yes, I like to read about them even if they’re unavailable, but I have to admit I get more excited when I can get them to taste.

mmWine @1WineDude not sure what a twitterari [ editor’s note” my misspelling! ] is. I love reading about wines I haven’t had before. Let’s me try to find them. 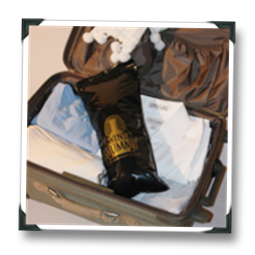 p.s. – I should note that because I was overflowing with wine from the WBC, I was finally able to try out a product sample that I’d been sitting on for months.  It’s basically a single wine bottle-sized bubble-wrap package called the Wine Mummy.  Wine goes into Mummy. Mummy goes into suitcase. Suitcase goes into water. Shark’s in the water.  Our shark.  Which is how it works, except for the parts I borrowed from Jaws.  Anyway, happy to report that the Mummy worked quite well, and my bottle survived two plane flights in perfect condition (which is good, since it was red wine and I wouldn’t have enjoyed getting those stains out of all of my travel clothes).  Worth a look if you’re traveling by air to wine country and are worried about bringing a bottle of something decent back home with you.

24 thoughts on “Do You Care About Wines You (Probably) Can’t Have?”