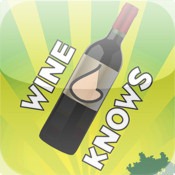 With the buzz happening around the Weekly Wine Quiz, I’ve got wine trivia on the (vino-soaked) brain lately. So it seemed serendipitous that I was contacted by the folks at Trivia Knows to try out their new cross-platform mobile wine trivia game, Wine Knows Trivia. 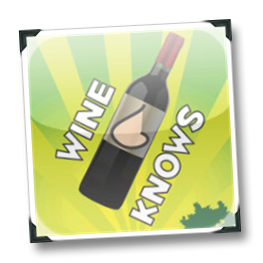 They invited me to take a sample test rive of the game on the iPhone, and I can say that I am fairly impressed – the interface is slick, there’s a bit of game-addiction action as you rack up bottles that measure your winnings/progress (which you can then share via twitter, Google+ and Facebook for bragging rights among your social circle as to who has the most wine smarties). And we all know that wine knowledge makes you appear sexier to your potential amorous pursuits (just sayin’).

And now YOU have a chance to win a copy of Wine Knows Trivia for iPhone/iPad/iPod Touch, because we’re giving away a redemption code for the app to THREE lucky commenters this week!  Here’s the deal: you comment on this post, and at 9PM ET on Friday, January 27th I will randomly select three winners from the comments who will receive a redemption code via e-mail (if you win, you need to act fast – after February 3rd, the codes evaporate into the ether, never to be seen again!). Comment discussion topic coming after the jump.

Some of the questions in the Wine Knows trivia game are pretty friggin’ difficult – I found a few that rivaled those posed within the exams of the certifications for which I sat over the years. so it should keep all but the most die-hard wine geeks entertained…

For example, do you know the most commonly-used grapes (of the 14-some-odd varieties allowed) in the making of vintage port? Probably not off the top of your noggin’.

It’s not all a bottle of rose, of course – questions that you answer incorrectly tend to repeat themselves until you get them right, which you may find annoying. And as far as I’m able to discern, the app totally ignores the mute button on the iPhone, and there’s not setting to turn off the sound effects and music, forcing you to manually reduce the volume if you want to play while you’re supposed to be paying attention in a meeting. And finally, some questions use the term “varietal” as a noun (totally unforgiveable!). 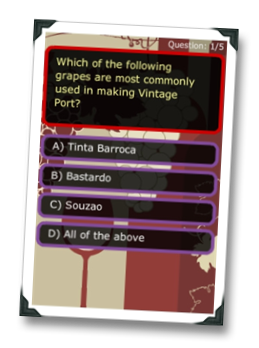 Anyway, as a wine geek you can do a lot worse than while away your time learning some interesting tidbits about your favorite beverage by challenging yourself with all the great questions that Wine Knows Trivia poses for the bargain price of $0.99.

So if you wanna win a copy to put your wine brain to the test, shout out the following in the comments:

What’s the most difficult wine quiz/test/question you’ve ever faced?

For me, it would have to be the section on the WSET Advanced written exam that dealt with Spanish brandies – I was totally unprepared for the inclusion of that (shame on me!). But then, the exam seemed to include a good proportion of questions pertaining to the Pacific Northwest of the U.S., and if had been a Londoner studying for the exam I probably would have sh*t myself on those questions!