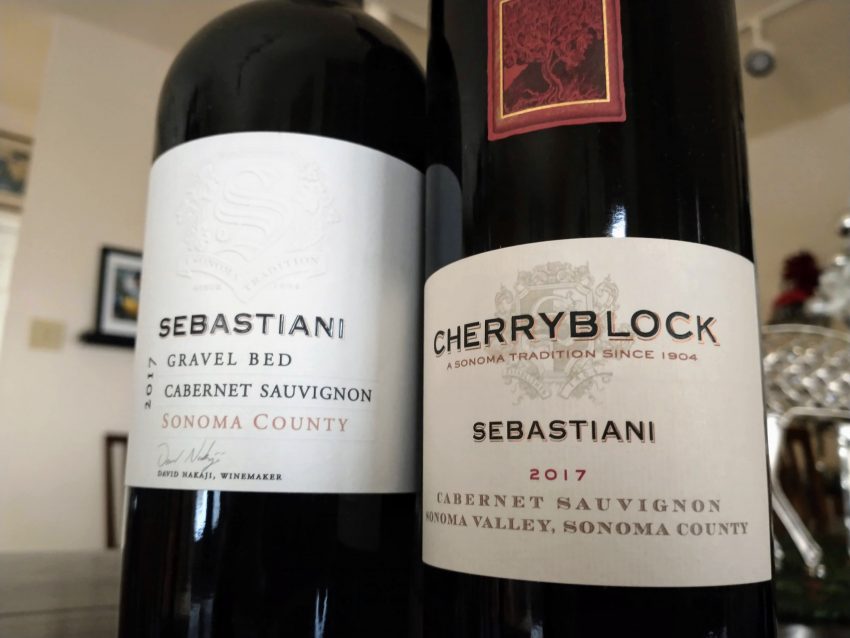 Out of the many (many) virtual media/samples tastings I’ve taken part in remotely due to Covid-19 SiP, this one was near the top of my list as potentially most intriguing.

That’s because this one was focused specifically on Sebastiani’s high-end Cabernet Sauvignon lineup (as guided by winemakers Sarah Quider and Mark Beaman), including the iconic Cherryblock – a wine I hadn’t tasted in years. I’m pretty sure that I don’t know anyone who’d decline an opportunity to taste Cherryblock… and if I do know anyone who would do that, I’m not entirely sure that I want to know them.

First, a bit of history. Set the Wayback Machine for 1895. Actually, set it for 1823, when the northernmost and last-built California mission was established in Sonoma – those folks planted a vineyard in 1825 (it’s a part of Sebastiani’s property now; keep it mind). Now we can get to 1895, when Sebastiani’s founder immigrated to the U.S. from Tuscany. As a mason, he (literally) helped build the town of Sonoma before founding his winery, while also growing cherries (keep that in mind, too) during Prohibition. His son August took out some of the cherry trees, and instead planted vines with what was then an unknown bud-wood (which ended up being a heritage clone of Cabernet), after his father died in the 1940s. Eventually, the winery passed to three of August’s children. The Cherryblock Cabernet they made from that old vineyard that once grew cherry trees eventually got a 100pt score, putting it firmly on the top-tier of the single vineyard Cab map. In 2008, they sold the Sebastiani operation to Foley.

Caught up? Good. Now we can talk about Sebaastiani’s current vineyard setup, which focuses on the southern portion of Sonoma County, near the bay. “We have a bit of a cooler region,” noted Quider during our tasting. “We get those beautiful fruit characters from the grapes, but we also get nice acidity. What I see in our vineyards and our Cabernets is, you’ll see this brightness in the wine; there’s a lot of cherry, a lot of pomegranate. That’s what is so unique about our site.”

If you’re an impatient as I was to get to the Cherryblock, I sympathize. So I’ll try to make this quick…

This red is sourced from the northern portion of Sebastiani’s Sonoma plantings. “The particular vineyards, based on where they are in the hillsides, are a little bit of a cooler spot for Alexander Valley. There’s a history of making wines at this particular location with a thought of how it pairs with food,” according to Beaman. Graphite and mineral notes kick things off, followed by cranberry, warm baking spices, and cedar aromas. Black raspberry, with bright fruitiness and hints of earthiness and dried herbs mark the palate. There’s punch, and plumpness, but also refreshing lift, with the oak being nice framing rather than seeking the spotlight. As Beaman  described it, “it’s not like Tammy Fae Baker putting on makeup” [rest her soul].

“Our soil series tend to be very gravelly with a little bit of silt in there as well” remarked Beama. This naturally reduces the size of the vines, which are about 60 years old. Cola notes, with sweet tobacco spice, dried herbs, and very juicy dark and red plums make for an inviting nose here. The palate is full of focused and deep fruitiness, and is absolutely banging right now – bold, fresh, bright, deep, and screaming for some beef to pair up with it. Poised, and composed, it’s a powerful hand in a velvet glove.

In describing the rocky vineyard that sources this release, Beaman told me “it’s not quite Châteauneuf-du-Pape, but there are some big stones out here.” There’s also some trellising diversity in the Heritage block used for this red, which gives additional sun exposure, promoting smaller, more concentrated berries. And this is pretty concentrated stuff, with fresh and dried plummy fruits, blackberries, dark herbal spice notes, and graphite. This is on the hedonistic side, but still has plenty of balance. The concentration is both sultry and elegant… but mostly sultry. “There’s authenticity to the variety, and to the style. I love drinking these wines.” Beaman remarked.

Finally, the Main Event. This is, of course, Sebastiani’s flagship red. The majority of the fruit comes from their original Old Vines block of Cabernet Sauvignon (planted in 1961). Lots of blackberry, black raspberry, red plum, Christmas spices, and vanilla… you can tell right away this is complex, contemplative stuff. The structure is ample, but supple, and beautifully integrated. It’s BIG, for sure, but it’s balanced and has wonderful freshness. Graphite, mineral, dried herbs, blackcurrant, hints of mulled cranberry, cedar, and tobacco leaf all show up, too, with toast and smoke making short appearances. There’s just a lot to process here. It’s still a baby, but already has tons of character and poise. It is, for sure, the most characterful and complete Cherryblock I’ve yet tasted. As Beaman beamed, “I’m stoked.” Apparently, he was channeling most of us with that remark.

2 thoughts on “Wine in the Time of Coronavirus, Part 24: Life’s a Bowl of Cherryblock (Sebastiani Cabernet Recent Releases)”