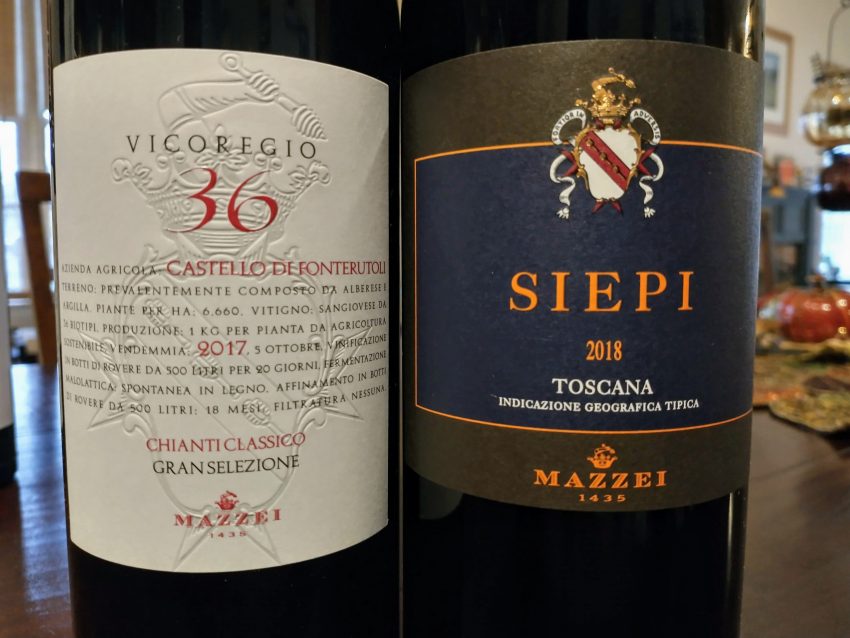 Usually, with these COVID-era virtual wine sample tastings, we end up with a good, small group of like-minded journalist types who imbibe and learn and ask questions about whatever vinous delicacies we have the luxury of being able to sip during a Zoom call.

Occasionally, however, we end up with a good, large group of like-minded wine nerds, along with wines that are just as good as the company; such was the case when I was asked to taste through the mostly Gran Selezione lineup of Chianti offerings from Castello di Fonterutoli, with 25th generation family member Giovanni Mazzei leading us through the proceedings.

Interestingly, while Mazzei’s family has deep historical roots even by Western European standards (they’ve been in the biz since 1435), they’ve got a few Tuscan “firsts” that are of a much more modern bent, including the region’s first 100% gravity fed facility, and among the earliest Tuscan producers to feature different district versions of Gran Selezione (inspired by their vineyard territories, situated within the adjoining Chianti Classico municipalities of Castellina, Castelnuovo Berardenga and Radda).

About that history, though (as per Mazzei): “My family is from Florence. They’ve always been linked to winemaking and the wine industry; they were coopers.” The Mazzeis has ties to documents dating back to 1398 that mention Chianti as the wine of the region. For the last 50 or so years, they have focused on Sangiovese research/nursery, selecting specific clones from older vines on various aspects and soils, to get the “best combination to deliver the most emotion; it’s a massive puzzle.”

For those unfamiliar with Chianti’s relatively new Gran Selezione designation, prepare to be both impressed (with the quality of the wines) and confused (by pretty much everything else having to do with the designation). Giovanni Mazzei did an admirable job explaining it during our virtual gathering:

“It’s top of the pyramid for production. Only 5% of the total production of Chianti Classico is classified as Gran Selezione. The meaning of it, is, for the first time we have an appellation that really starts from the vineyard. Nothing has really changed, but it’s changed our way of seeing the great wines from this region. The aim is to do wines that really reflect the viticulture of the region.”

In other words, it’s the top of the Chianti red wine quality pyramid, with an emphasis on sub-regional typicity, but most producers will tell you that they didn’t change anything from their normally high Chianti Classico Riserva standards in order to make it. Okaaayyyyyy…

Made from a selection of the best vineyard plots surrounding Fonterutoli, about 480m above sea level. With lavender, violet, orange peel, black cherry, dark herbs, this one delivers in crowd-pleasing ways. “The grapes are giving you a sense of purity” noted Mazzei; and it does have a directness to it, along with a sense of authenticity. There’s Great freshness and linearity, along with funk and also grit. It’s long and floral, and on the lighter side, with a nice balance of delicacy and structure.

A blend of 36 different Sangiovese biotypes, deriving from the aforementioned 50 years of research, from the single Vicoregio vineyard. Each clone (planted in separate rows) is first vinified individually, hence the name. “It’s a hell of a job!” as Mazzei put it. Wild, brambly cherry fruit, and wood spices kick things off, followed by floral, tangy, even savory notes. The mouthfeel is incredibly fresh, but also has broad, generous fruitiness, with red berries and plums. Full of earthy tones, with almost chewy, grippy tannins, and yet it’s silky, with sensuous ripe red fruits on a long, clove-tinged finish. It’s a gorgeous sipper, with plenty of time left.

From the estate’s highest altitude vineyards, just below the 12th century church of La Badiola comes this red, full of earth, spice, mineral, cherry fruits, and orange peel aromas. This vineyard is at the highest altitude of their three Gran Selezione offerings, with galestro and limestone soils. “It’s very rocky. Yields are extremely limited – sometimes it’s quite heartbreaking” Mazzei mentioned. Lively is the operative word here – this one has a ton of energy, finesse, and a perfumed feel about it. Hints of clove, a bit of funk, graphite, and a lot of structure and length, too. Soooo mineral and fresh. Austere, but also approachable. And authentic AF.

This one’s not a Gran Selezione, but I’m not one to turn down an offer to taste a preview of a true Super Tuscan red’s upcoming release. This 50/50 blend of Sangiovese and Merlot was first produced in 1992, and hails from a vineyard belonging to the family since the 1400s. The soils there have a good level of clay, which lead them to planting Merlot in the 1970s. “There’s something quite special about the Merlot from Tuscany in general” Mazzei mused. Interestingly, the decision to blend Sangiovese and Merlot was a compromise between the older and younger generations in the family (this is the type of stuff that old Italian families argue about, I suppose). Smoke, dark herbs, tobacco, lavender, black olive, black plums, grilled orange peel, black cherry, wood spices, and just a hint of wet earth… there is so much to unpack here. The palate is clean, polished, and pure. Dark fruits, with breadth and depth, followed by laser-focused freshness, then a coffee-toast-and-spiced-plum finish that seems to go for days. This just kicks all kinds of ass.