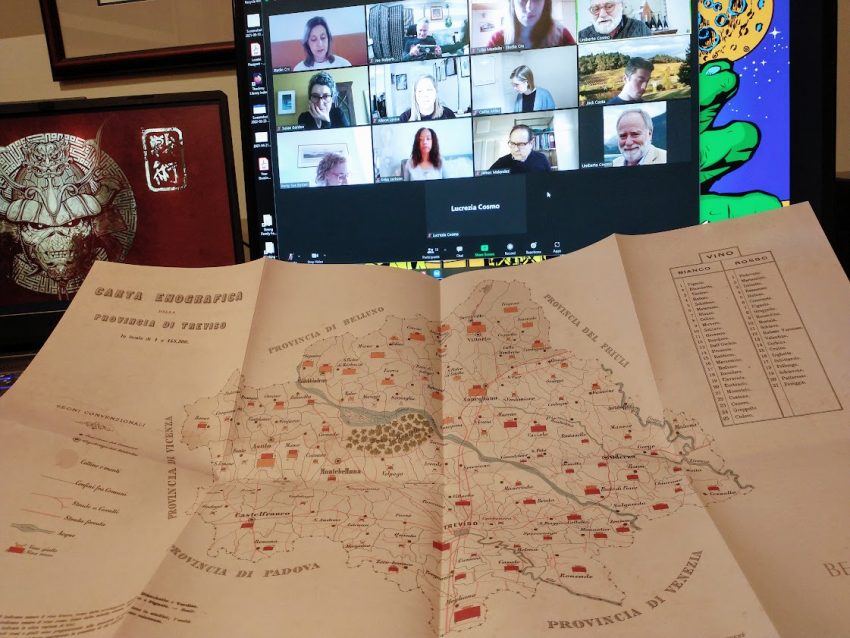 “We always wanted to break the rules.”

If ever an outfit in Valdobbiadene embodied the Italian spirit of flaunting convention, it’s this one. Founded in 1986 by Umberto and his brothers and father, Bellenda came about due to Umberto being “almost disgusted” by the industrial nature of his family’s animal breeding business. For generations, his family owned vineyards and sold their fruit to local producers—forming a small estate/boutique winery was, at the time, relatively unheard of, particularly in Italy’s Prosecco region where larger brand labels dominated. Detractors told Umberto’s father “‘you are going to lose a lot of money, because Italian wine is dead forever.'” Given the immense success of Prosecco bubbles since then, that piece of advice seems to have aged about as well as milk.

It’s not just in approach and size that Bellenda bucks the trends; as you’ll read below, they take every chance they can get to turn the conventional notion of Prosecco firmly onto its proverbial ear…

This delightfully elegant sparkler takes its name from the county church that sits adjacent to the limestone-clay vineyards that source it. It’s one of the more precise Prosecco incarnations you’re likely to encounter, offering up pear (with the skins) and wet stone notes. The palate is fresh, fresh, FRESH, with ample green and red apple flavors that are both crisp and over-ripe. It’s hard not to love this wine’s vibrant mouthfeel and fantastic length, ending with citrus pith notes.

Named after Sergio Cosmo (Bellenda’s founder) and the year of his birth, this kick-butt Superiore sees partial oak barrel fermentation without temperature control, resting on the lees for three months and then again in the bottle for up to eighteen months, finally being disgorged without liquer d’expédition. Sugar levels are ultra-low (about 1g/L). Apple bread, white flowers, ripe pears, apples, and toasted nut all hit from the nose, along with earthy notes among the more evolved fruit flavors. On the palate, it feels substantial and austerely serious, coming off as reserved and tightly wound—a serious ‘head-fake’ when it comes to what we conventionally think of with respect to Prosecco. Lip-smacking and almost chewy, this is an age-worthy bubbly that might have you rethinking your entire Prosecco mindset.

Multiple plays on words going on here, with “61” being Umberto’s birth year, and “you are…” being a phrase that apparently his wife like to use (use your imagination to fill in the blank). This classic method sparkler from Rive di Carpesica also spends several months sur lie, with a further six months of bottle aging in Bellenda’s cellar. And… wow… this has nose reminiscent of am excellent non-vintage Champers, with pear, apple, filbert, and brioche action all over the place. The texture is complex, bouncing between richness and vibrancy, all the while dominated by lovely apple flavors. Refreshing above all else, you won’t mistake this for a Champagne in the mouth, but you wouldn’t dare dream of turning this elegant sipper away, either!

“As it is” is a fitting name for this Vino Frizzante. Umberto had to convince his brothers to let him craft this one. The tradition of local farmers taking unfiltered Prosecco with their meals lives on in this bubbly, which is bottled with natural yeast sediment, giving it an appealing hazy appearance. Sourced from a south-southwest facing vineyard near Carpescia, this has a classic Valdobbiadene nose but is less boisterous about it. A palate cleanser to its core, this is profoundly fresh in the mouth, there being pretty much no residual sugar in the mix. Consider it a “more modern” take on the current semi-sparkling craze (well, the craze among wine geeks, anyway)—it’s elegant AF, but you’d better like your bubbles on the zesty side!

The most unconventional of all of the unconventional wines in the Bellenda lineup, there’s no added SO2 here. This wine is allowed to ferment for fifteen days on the skins, in non-temperature-controlled wooden vats, and secondary fermentation taking place in the bottle. Bellenda state that they “made this wine with our heart as well as with our head,” in a throwback to the “accidental” bubblies that gave birth to sparkling wine in the region. It’s slightly hazy in appearance, with an inviting nose of flowers and grape notes, just-ripe pear, and a mild bit of funk. Balanced and fresh in the mouth, you get flavors of toast, peaches, and banana. The structure comes off like apple skins in a delicious, ambling way that’s about as crowd-pleasing as Pet-Nat gets. It makes a strong argument for putting more Glera-based Pet-Nat on the market…