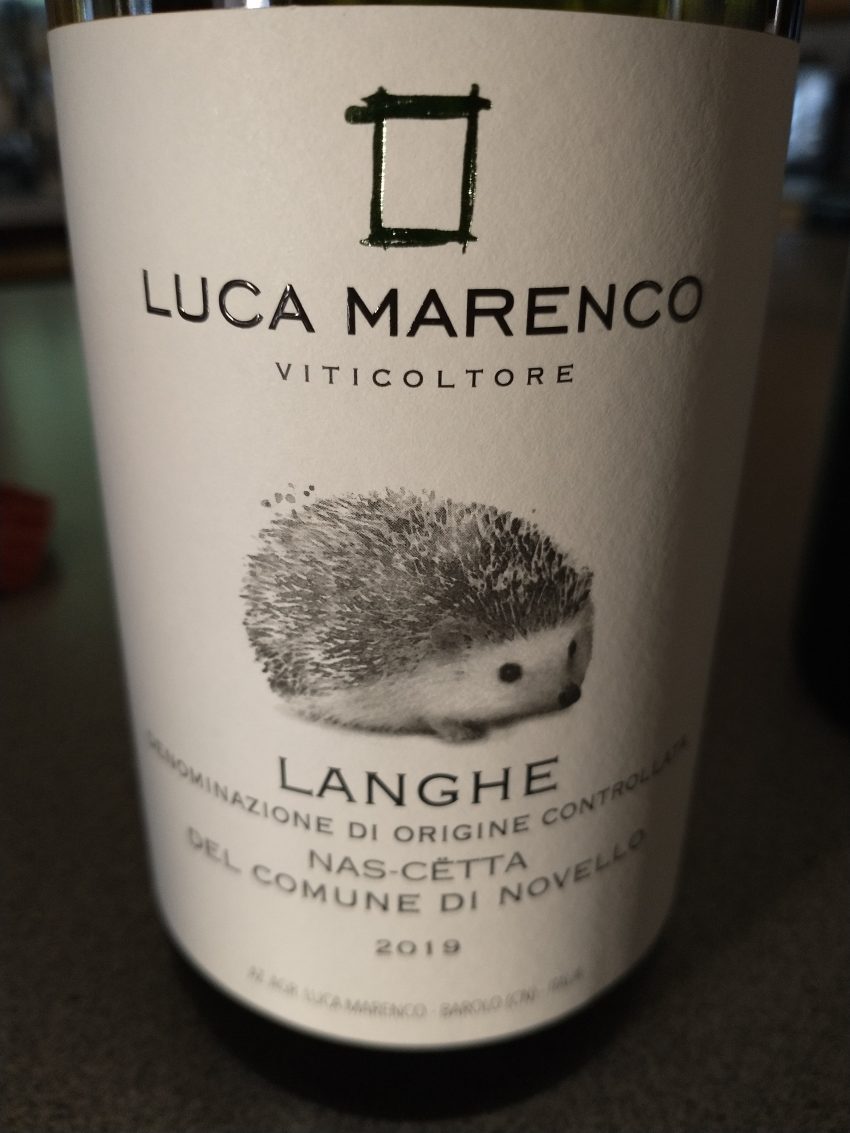 Back in November 2021 (!), I attended a media tasting with producers and wines of Piedmont’s Langhe DOC Nas-Cëtta del Comune di Novello. These are basically the coolest Italian white wines that you (almost certainly) aren’t (yet) drinking.

This is yet another unsung grape that appears to be native to Italy’s Piedmont. The first written testimonies of Nas-Cëtta (or “Anascetta”) date back to 1877, when scholar Giuseppe dei Conti di Rovasenda in his Essay on universal ampelography, called it “a very delicate grape and exquisite wine.” A bit later, In 1879, Lorenzo Fantini in the Monograph on Viticulture and Oenology in the Province of Cuneo, linked it to the small comune of Novello, definig it as “almost exclusively produced in the Novello area” and whose “goodness is due solely to nature that provides exquisite grapes.”

So, of course, it almost disappeared into obscure oblivion within a century. First, Phylloxera all but wiped it out, then production tanked with the poverty that followed WWII. Then, Nebbiolo took off as the guaranteed cash-cow wine grape (which also happened to be a lot hardier than the relatively fragile and pain-in-the-ass Nascetta, which no one was particularly interested in farming). By the 1990s, the situation was dire enough to inspire a revitalization effort, first by Professor Armando Gambera and then by Elvio Cogno (who acquired grapes from the two oldest vineyards in Novello, dating back to 1948 – one of which still exists in Pasinot, now owned by Le Strette). As Valter Fissore (of Elvio Cogno & the Association President) put it, “It’s quite challenging to start producing a white wine from an unknown grape variety” in the very heart of Barolo’s production area.

Thankfully, however, that’s exactly what the intrepid producers of Nascetta are attempting to do. It’s a labor of love for a grape that is disease-prone, and characterized by limited vigor, low productivity, and even lower fertility. As Savio Deniele (of Le Strette) put it, “Nascetta is something particular” (which is what Italians use to say it’s unique/special, but the more Americanized connotation of it being eccentric/odd applies just as fittingly).

This winery is most known for its Barolo, and Nacetta is the only white wine that they make. “We strive to find the purity… of this variety,” noted Rivera’s Gabriele Oderda. The first vintage was in 2016. This white sees extended time on the lees. It’s immediately lovable on the nose, with perfume, white flowers, brioche, and citrus action. The flavor profile is more citrus than apricot, and comes off quite Riesling-esque. Deep, mineral, and fresh, it was affection-at-first-sniff for me.

As per Cogno’s Valter Fissore: “I have a lot of harvests [of Nascetta], behind me. I spent a great effort to save this grape. I have seen the beautiful evolution of this wine.” These guys have experimented on the best production methods for Nacetta more than just about anyone else. With spice and mineral notes, a heady nose, delicate herbal tinges, and pepper hints, there’s much here to keep the intellectual stimulation going. Flavors of just-ripe exotic fruits and tropical fruits abound. The palate is alive/electric/exciting. If you love N. Italian whites, you need to find this one.

Savio Deniele co-founded Le Strette with his brother, and his mother-in-law is one of their grape suppliers. They began selling Nascetta in 1999, and now produce two labels (including a single vineyard cru from the region’s oldest vineyard). With all of the peach and apricot this one throws around, it feels almost like a (really good) Chardonnay. Wonderful concentration awaits on the palate, which is broad but still lively. It has deep structural appeal as well (Nascetta being relatively high in tannin). Probably the Nascetta to use to convert the weary.

Stra has a mere 1 hectare of Nascetta plantings, but are betting on the increased passion behind the variety. Smoky mineral notes kick things off, followed by exotic stone and tropical fruit aromas. There is gorgeous transparency to the palate freshness, and the spiciness lingers on a long finish with ginger hints dutifully picking up the rear.

This family producer started making Nascetta in 2018, and uses only stainless steel in its production. Owner Luca initially felt that he “did not have the patience” to make a good Nascetta. He was wrong. Along with the cutest label maybe ever, this steely, fresh white exudes apricot and wet stone notes, feels alive in the mouth, and flaunts its citrus and apple skin flavors on a structured palate that’s long and very well put-together.

This rendition of Nascetta spend 4 months in barrique, possibly explaining its almost effortlessly smooth palate feel. A gorgeously heady, lifted nose brings toast, citrus pith, and spiced apricot. All the while, the Nascetta fingerprints of freshness and classy structure are evident.

3 thoughts on “Wine In the Time of Coronavirus, Part 54: The Coolest White Wine You Aren’t Drinking (A Nas-Cëtta Deep Dive)”