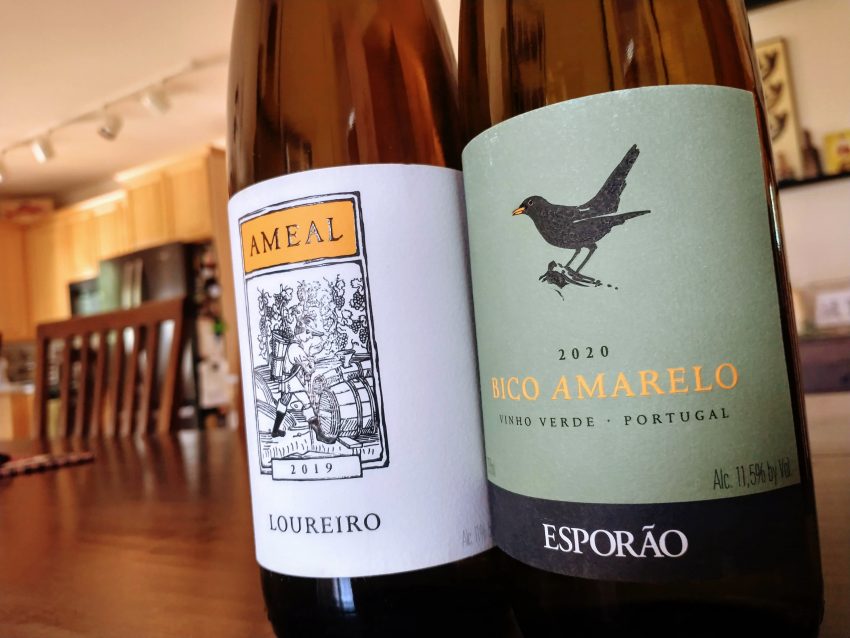 It’s actually been fifty… FIFTY!… of these not-in-person Zoom tastings since the global pandemic started? I’m getting twitchy for lack of travel, but my samples coffers remain more than full enough to supply with me with enough alcohol to dull the pain.

For this 50th incarnation of SiP (Sort-of-Shelter-in-Place) sipping, we catch up with longtime friends of 1WD, Portugal’s Esporão, who made their name as one of the most famous, well, names in Alentejo. Esporão has, since my time working them several years ago, branched out to acquire Quinta dos Murças—a Douro property that was just being on-boarded when I first visited them—and Quinta do Ameal, an historic property in Vinho Verde.

If you’re thinking “well, those two are about as far apart stylistically as you can get,” you’re on the right track, as that was more-or-less the theme underpinning the tasting of recent releases by both estates that I attended, led by Ameal winemaker José Luis Moreira da Silva and Esporão’s Frank Paredes. “Our main goal,” emphasized José Luis “is to produce wines that represent each region, and show the differences with both.”

And different they most certainly are, though once could , with enough quick driving, see both of them in the same day.

The lusher, much wetter, and much greener Vinho Verde is still technically the #1 selling Portuguese wine region in the USA, and the largest DOC in Portugal by vineyard area. Rainy, lush, cool, and continental, with influence from the Atlantic ocean, the region’s vines grow mainly on sandy loam and granitic soils (“that reinforce the acidity” according to José Luis). By contrast, the Douro is, of course, noted for its steep viticulture, Schist/slate soils, arid climate, fortified wine production, and potentially scorching Summertime temperatures.

Such a juxtaposition of regions yielded what you’d expect: vibrant white wines, and the deep, plummy reds to match them as opposite sides of the Portuguese vinous coin. There’s a bit more to the story, of course, and that’s where our tasting kicks off…

Ameal is the more recent Esporão  acquisition, but the more historic, dating back to 1710. The property runs 2600+ feet along the Lima River, with rolling hills and changes in elevation providing variation in growing conditions. The previous owner bet big-time on the Loureiro  grape variety here, running with it since about 1990. Loureiro means “laurel” (and the grapes do smell like it). “It’s incredible how these wines resist aging,” noted José Luis. “For me it resembles Riesling. It’s all about the acidity and the freshness. The idea here was to produce a different wine” than the region had been known for previously, “more valuable, more premium.”

Here, Loureiro, Alvarinho, and Avesso are blended from three different subregions, in an attempt to “look for the harmony” between these grapes “in a natural way” (i.e., no gas, no sugar added, etc.). The vineyards are about 25 years old. This is floral and mineral, with lovely citrus notes (think limes, lemons, grapefruit…). Vivacious and fresh in the nose, with tropical hints, there’s plenty of acidity to go around, of course, but there’s also nice roundness on the palates’ edges. Light, fresh, and finishing with green apple and lime pith. This one delivers intellectual payoffs as well as refreshment—for a price that kind of defies belief.

This 100% Loureiro is “a blend of all the plots we have on the estate” explained José Luis, (those near the river giving acidity, and those on the hills bringing depth), and sees 6 months of batonnage. Talk about fresh aromas… Flowers, limes, and lemon rind – not overtly complex, but the nose feels elegantly refined. Juicy and refreshing, with mineral and bay leaf hints, the palate is absolutely electric, but never looses its cool or its composure. The finish is, indeed, reminiscent of Riesling, with its stone fruits and hint of spice. Elegant and excellent, and sporting a WAY long for the price!

While Ameal was already a well-established and well-regarded brand before Esporão picked it up, Murças still remains a bit of “a blank slate” for Esporão, even 12+ years after they acquired it. Its 48 hectares of vines (across 155 total ha) sport lots of biodiversity, and a bit of historical significance—in 1947, Quinta dos Murças had the first vertical plantings in the Douro (82% of the estate is planted in vertical rows today). The plantings favored more concentration and quality but lower yields (and in some cases, deeper roots), while also promoting more aeration in the vines, helping against disease pressure. “It’s really an important part,” noted Paredes, “the elegance is linked to these conditions” in their Cima Corgo location (the somewhat cooler area of Douro). The estate is now 100% Organic, benefiting from a 2015 a soil survey that afforded them deeper understanding of the plots and terroirs.

This blend of Touriga Nacional, Touriga Franca, and Tinta Roriz hails from vines that are now nearly 40 years old. The name (meaning “Whistle”) is derived from the sound the wind makes when it whips through the vineyards. Balsamic, blackberry, black plums, and ample spices mark the nose of this very friendly red. With nice freshness, its acidity balances its ripe red fruit palate and its tannins, which arequite well managed. Hints of wood spices round things out on the finish. This will make friends.

This red comes from al-estate fruit, with vine plantings dating from 1987-2011. Touriga Nacional, Touriga Franca, and Tinta Roriz are here joined up with bits of Tinta Cao and Tinta Francisca. The QUinta’s traditional lagares are still used for foot treading the grapes. Intense and ripe, this one is spicy, spicy SPICY! The fruits are quite black, and they are powerful. Leather, dark dried herbal spices, wood spices, dried violets, and smoke all show up, too. The palate is fresh, exciting, and also deep with tangy red fruit, big and spicy black plums, and balsamic notes. This feels young right now, and will likely get even more robust given a few years in bottle.