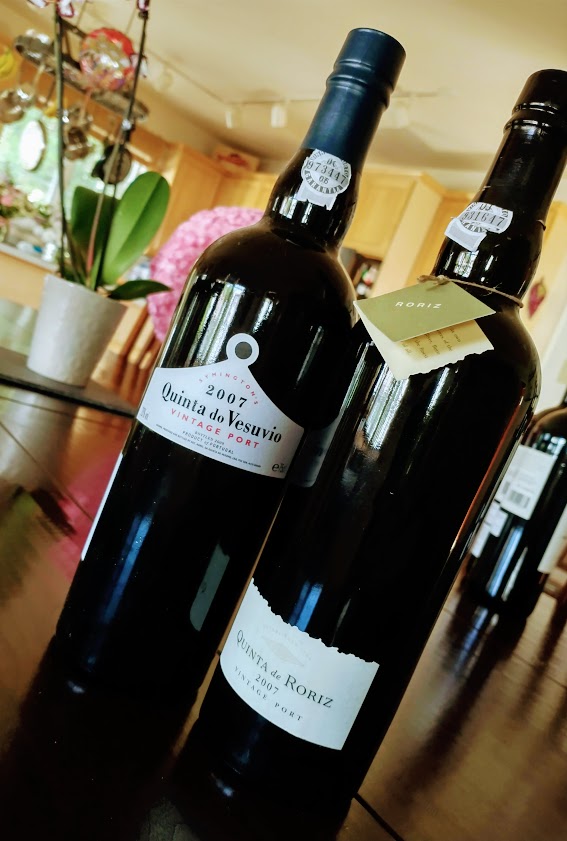 “We probably have the most expensive viticulture in the world.”

So claimed Charles Symington, CEO of 5th generation Port and Douro powerhouse Symington Family Estates, during a recent ZOOM live tasting in which he was joined by fellow family member and Head Winemaker Charles Symington. And he has a point—and he has perspective, with Symington farming about 1,000+ hectares of vines in the Douro, with 26 estates and 8 wineries currently in operation. The staid but somewhat droll demeanor of both men belied the excitement that awaits anyone lucky enough to nab the wines we tasted, but we’re getting a little ahead of ourselves here.

“As you go from west to east [in the Douro], it becomes dry and hotter,” Charles explained, as we (impatiently, in my case) readied to taste through selections of still reds and vintage Ports from both Quinta de Roriz (in the Cima Corgo) and Quinta do Vesuvio (a much larger property in the Douro Superior, established in 1827 and acquired by Symington in 1989). “The rain we get in the Douro is mainly coming off the Atlantic. Temperatures in the Douro will often go below 0C in the Winter; in the Summer it’s not unusual to see 50C.” Combine those conditions with “the geography following the mountainside, the extremes in temperature, the lack of rainfall” as well as naturally low yields, hand-harvesting, and local regulations that would charitably be described as difficult, and you have a formula for viticulture that is anything but cheap. “The effort’s definitely worth it,” he insisted, though “there’s always an element of risk management.”

As for what makes the Douro such a special place worthy of said effort, Rupert Symington chalked it up to the region’s unique soil system. The soil has “a quite porous and well-drained” schist layer “all over the main Douro valley,” he advised. Rainfall filters through all of that schist, forcing vine roots to go deep into granite to find water (especially important during the hot, dry Summer months). Low yields of concentrated, intensely flavored grapes are basically the natural byproduct.

Here’s a disclaimer: I have history with a few of these wines, and so jumped at this tasting opportunity. They happen to be among some of my personal faves, so I’m not making any promises that I’m in fully objective territory from here on out… you have been warned!

2018 P+S Prats & Symington Post Scriptum de Chryseia (Douro, $28)
According to Charles Symington, “2018 was really a very good year. It was very balanced, allowing for sugars and acidity to develop side by side.” This melding of Touriga Nacional and Touriga Franca (with some Tinta Roriz) puts a crowd-pleasing exclamation mark on that statement. A spicy nose, with hints of vanilla, cedar, lots of plum; lovable palate suppleness, combined with juicy red and black fruit flavors, and just enough spice and acidity all keep things jaunty. it gets funky, meaty, and yet still even spicier on the powerful finish.

Speaking of keeping a crowd happy, there’s this other blend of Touriga Franca, Touriga Nacional and Tinta Amarela. Herbal notes, with spice, dried violets, black and blue plums, cassis, licorice, and dark chocolate… not much to dislike here. It has softness, but also depth and concentration (and deceptively high amounts of structure). Delicious stuff.

Touriga Nacional (75%) and Touriga Franca… again… For Rupert Symington, this release is “a huge personal favorite of mine,” as he feels the 2017s are “absolute classics.” After tasting this, it’s not easy to find reason to disagree with him. Stewed red and blue fruits, ample spices, several types of licorice, and dried herbs all mark the entry. Dusty tannins, red plum and redcurrant juiciness grace the palate. There’s a fantastic finish, with plum flavors and vivacity throughout, along with meatiness, earth, and fantastic length. This is one of the most elegant TN-based reds you’ll likely ever find.

Touriga Franca (56%), with Touriga Nacional (41%), and Tinta Amarela (3%). Garrigue/dried herbs, pine needle, cedar plank, dried blueberry, ripe black and blue plums…. there’s a gorgeously sexy nose that extends right into a gorgeously sexy and round mouthfeel. This is but a mere pup at the moment, based on the killer combo of structure and acidity happening in it at the moment. While this is powerful and ripe, there is nothing that doesn’t feel luscious and luxurious in this—especially in that irresistible, lengthy ending.

Charles Symington described 2007 as “a rather unusual year… probably one of the coolest years” for the region, one that promoted “better acidity, and fantastic aromas; it’s one of the best years of the century so far” for Port. This release (as well as the Quinta do Vesuvio below) are foot-trodden in lagares, “a very simple method [that] can produce the most extraordinary wines.” And extraordinary this is. There’s. So. Much. SPICE. Think innamon, cigar, sweet tobacco, vanilla extract… along with raisin, dried fig, blackberry syrup, hints of rum, and black licorice. Immensely long in the finish, the balance throughout the palate on this Port is downright exceptional. And this is still youthful! (“Going through its teenage phase” according to Charles).

Garrigue and dried herbs, blackberry syrup, dried flowers, eucalyptus, cola, dried black cherry, and they are all wrapped up in a sense of almost regal power. This is HUGE right now: dark, flamboyant and showy. The fruit flavors have this interesting combo of stewey plum action, with rich and velvety sweetness that all feels seamless. Quite long, and structurally still young. If you like them dark and sweet, there are few better.