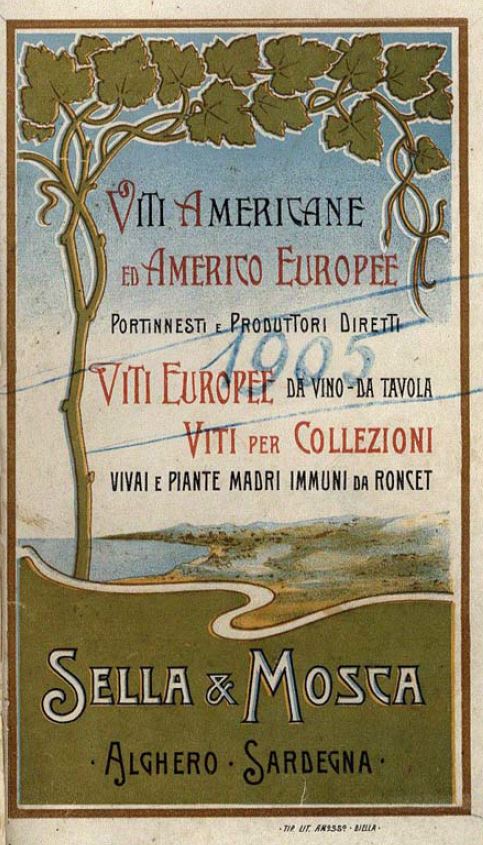 Recently, I was invited to taste some S&M samples via Zoom.

Ok, your randy peoples, we’re talking about a very particular, vinous S&M here – specifically, Sardinia’s Sella & Mosca. The one Founded in 1899 by two Piedmont businessmen, Erminio Sella and Edgardo Mosca, who after the Phylloxera epidemic ambitiously wanted to reclaim vineyards in the island’s I Piani area. Now, the I Piani estate is the second largest contiguous vineyard in Italy, and still employs the cellars built in 1903. Notice I wrote cellars and not dungeons…

Anyway, for this particular tasting we were joined by winemaker (and Sardinia native) Giovanni Pinna, and Sella & Mosca Export Manager Alfonso Gagliano, who walked us through the tasting, as well as through the history of both Sardinia and Sella & Mosca. Regarding the former, Sardinia came (millions of years ago, of course) as a chunk off of the Iberian Peninsula, from what is now the south of France. So, it has similarities geographically to Provence, along with a Mediterranean climate (given it’s now in the middle of the Mediterranean Sea). Interestingly, the most traditional foods are inland, and not seafood, since historically Sardinia was a prime target for invasion, which over time became a serious deterrent for coastal activities such as fishing (suckling pig preparations there traditionally date back 2000 years, for example). The island is also famously part of “The Blue Zones” – those regions of the world containing the highest concentration of people that live into their 100s. Of course, this being the wine biz, we like to credit that longevity to alcohol somehow – traditionally, the homemade wine in Sardinia was “crafted” from varieties with high resveratrol content (thought to be healthy… maybe… probably), and the locals started drinking small quantities of it with meals from relatively early ages. Your mileage, of course, will probably vary when it comes to combinations of personal lifespan and Sardinian wine drinking.

As for Sella & Mosca, their winery is located in Alghero in northwest Sardinia, a fortified city founded by the Catalans. Much of their vineyards are there in the hot and dry climate, plus holdings in the very north (Gallura), central-east (Ogliastra), and far southwest (Sulcis). And here’s a prime wine trivia question candidate for you: Sella & Mosca’s 1,600-acre I Piani estate constitutes the second largest contiguous vineyard in Italy, covering more than 1,200 acres of vines (which also makes it one of the largest such wine estates in Europe). There estate vineyards are all organic, focusing mostly on “native” varieties. As for how the founders got there: they were bankers who vacationed and hunted in Sardinia, and noticed that the vines there weren’t succumbing to the Phylloxera epidemic the way that most European vines had been at the time (business opportunity alert!).

Now that we’re all caught up, let’s drink!…

Sparkling and seaside are a natural combo, but sparkling and Torbato might not seem quite as natural a paring to many of us, so here’s some more background: Torbato is an ancient grape variety from the Malvoisie de Roussillon family, probably introduced from the Aegean to the Iberian coast by the Phoenicians and brought to Sardinia by the Catalans around 600 years ago. It basically disappeared in Spain, and was headed for the same fate in Sardinia as it’s difficult to grow and to vinify (its name comes from the word for turbid, because it produces a cloudy must). Sella & Mosca are widely considered to be the savior of the variety, leading its resurgence (well, at least on Sardinia). The soils for these single vineyard grapes are chalky (something Torbato seems to love), supporting 20 year old vines. Assertive and fruity on the nose (thanks to the Charmat production method), this exudes acacia flower, grapefruit, and lemon rind. The palate has a mix of savory and fresh citrus notes. Very fresh, with light herbal hints, iodine, and a long finish. It just feels like an island wine, appropriately.

Sardinia’s flagship white variety is used to create La Cala, named after a particularly pretty stretch of coastline. La Cala comes from Alghero, with soil rich in lime and clay, in a spot that enjoys strong sea breeze influences. Apples, tropical fruits, and several kinds of pears mark the nose, followed by hints of mineral, saline, white flowers, lemons and limes. I love the palate – equal parts citrus pith, refreshment, and “exotic” tropical fruits. A little welcome bite of astringency linear acidity, a ton of minerality and a long finish all make this white overachieve. There’s just a lot to like for the price here.

This is Sella & Mosca’s archetypal Torbato, sourced from their inland vines growing on a mountainous terrain of granite, schist, sandstone and limestone. The grapes are harvested later than for the Brut. Acacia is back, joining hints of grilled citrus and honey. Nice and fresh, but also has some round edges to it. Quite elegant overall, with nice salinity, though not terribly complex in terms of its grilled citrus and peach flavors (trust me, you won’t mind).

Recent archeological work has uncovered several hundred year old grape seeds in Sardinia, and they happened to be Cannonau. Part of the Grenache family, Cannonau is the region’s most widely-grown red wine grape, probably brought to the island by Phoenician traders (given the dating of the grape seed findings). The nose has a lot going on – dried violets, pepper, jammy red plums, black cherries, dried herbs, and balsamic. Juicy and immediately pleasing on the palate, this red is very fresh, and quite elegant. This needs foods to tame some of that raging acidity, but that doesn’t stop it from feeling piquant and lovely, and carrying its 14% abv and structure extremely well.

This 50/50 split of Cannonau and Cabernet Sauvignon sees 12 months in French oak (partly in second use French barrique, and partlky in oak casks). At the rish of sounding like a broken record here, this red is… elegant. Cloves, spices, herbs, earth, tar, blackcurrant, leather, some game meat, and matured notes like stewed red and black plums… it’s quite a nose, really. It’s supple, balanced, and almost Bordeaux-like in how it presents on the palate with its balsamic notes and ample freshness. It’s structured, vibrant, and delicious. Still plenty of fruit left, but you’ll need to like them on the mature side to get fully into this one.