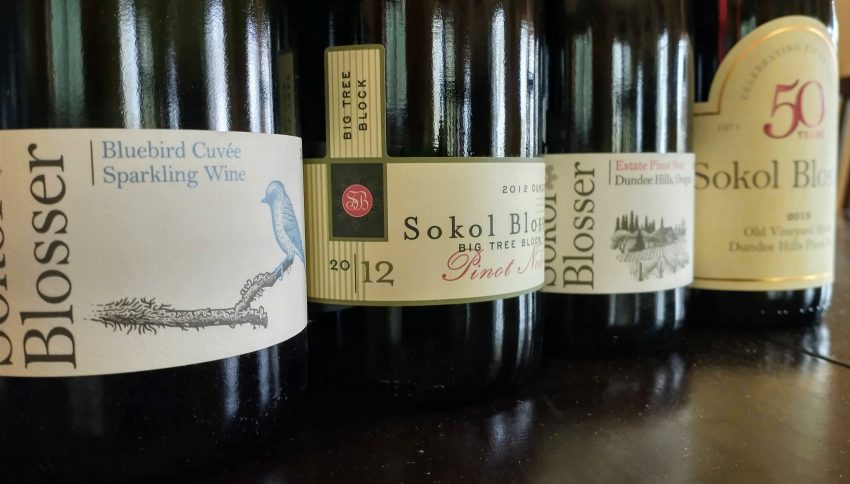 Thanksgiving dinner at the Sokol Blosser household must be LIT.

And I use “leading” in a very loose sense here. With all of the good-natured ribbing going on between that group, the proceedings had more of a fly-on-the-walll-during-a-family-meal vibe than that of a formal tasting event. All for the better, of course.

The Sokol Blosser clan first planted vines in Oregon 1971, with their first vintage produced in 1977. At the time, the wine industry in OR was nascent. Back when Francophile founder Bill was fond of wearing a beret (“Bill only took it off when he was taking a shower or going to bed,” according to Susan). Since then, of course, the Oregon wine scene has exploded, relatively speaking, to the point where the Sokol Blossers joked that they can on longer afford the land in their own backyard. “Mom and dad got really lucky choosing our spot. We called it the high rent district ” noted Alison.

“We were, I guess, certifiable,” mussed Bill, “but we also were dreamers; we loved wine. I got totally infatuated in wine and vineyards [in France]. As I watched the rest of the US wine industry re-blossom in the 1960s, it just got more… gnawing at the back of my mind.” Initially, the Sokol Blossers were going to try their viticultural hand in California, but they fell in with a small group that saw potential for Pinot Noir in Oregon – and through a UC Davis climate study that suggested that Dundee Hills was “as close to Burgundy as you were going to get in the United States” (Bill). Prescient thinking, as it turned out, of course.

There’s a lot more to the repartee, and to the SB story, and (in a manner in which I am pretty sure the family would approve) we’re going to tell it through the wines…

“When Alison and I took over as co-presidents in 2008… my mom likes to say it took two people to take over for her… Alison and I made a promise that before we turned things over to the next generation, we would be known as a sparkling wine house.” -Alex

“Actually, our first promise was that we would not kill each other!”-Alison

“We always thought that sparkling should be part of our program. We didn’t have the courage to do it, because sparkling is difficult; you make any mistake, and it shows up.” -Bill

Floral and very, very zesty, this bubbly is bursting with lime, lemon pith, green apple, and pear action – all of it delicious. And it is fresh, fresh, FRESH. While the finish isn’t long, it is quite pure, very refreshing, and extremely easy to like.

Alex joked that “making wine is like the excitement of the World Series, the circus, and the business of a kitchen in a restaurant, all rolled into one.”

But this Pinot release doesn’t give any hint of the chaos that he insinuated. Made with a combination of native “house” yeast, commercial yeast, and ambient ferments, there’s a nose of tea leaf, bergamot, and black cherry fruits. The palate showcases noticeable structure, intense freshness, and even some astringency that suggests a nice long aging curve ahead of it. With chewy red berry fruit flavors, enhanced with smokey spice, this one is Big (for OR), but also juicy, and focused.

“When we first planted, we all heard the stories from Burgundy, that the grand cru would be the first five rows… and we’ve seen over our fifty years that it’s true. We do see it over the individual blocks in our vineyard. Every year they just keep coming out and proving that they’re the real thing.” -Bill

The Old Vineyard Block Pinot Noir was harvested from the initial section of the vineyard planted by Bill and Susan in the 70s (subsequently replanted 2007-2009 on cuttings from vines taken from the original plantings, heritage-style). Several clones are at play here, including Pommard, Wädenswil 1A, and “a Gamay like-clone we identify as Pinot Droit.” They recreated the original label for this 50th anniversary bottling, giving the package a rather retro-cool feel. This elegant red sports intense cherry fruit aromas, and comes off as very focused and pure. That bergamot thing is there again, along with lots of dusty, herbal spice tinges. So fresh and delicious, it absolutely dances on the tongue. I love the combination of density and transparency – and the incredibly long finish.

What’s an anniversary tasting without a library bottling to show off, right? Alex got a rather auspicious start to his wine-making career at SB with this vintage. “What a gift!” he reminisced. The source block was replanted in two sections, during 1998 and 2000. “This was a great vintage. Period. I will most likely never see another vintage like this in my life time” (Alex).

This one is in tip-top shape, folks. It’s got spices galore, that are all over the tea spectrum. There’s an elegant, almost austere nose here, with cherry and red berry fruits, earthiness, and hints of plum. The great mouthfeel is equal parts supple, earthy, structured, and vivacious. It has an almost dark chocolate bitterness woven into on the palate, as well, with freshness and even tinges of youthfulness showing up from time to time. The finish whispers more than it shouts, but it’s got intriguing things to say, and lots on its mind.