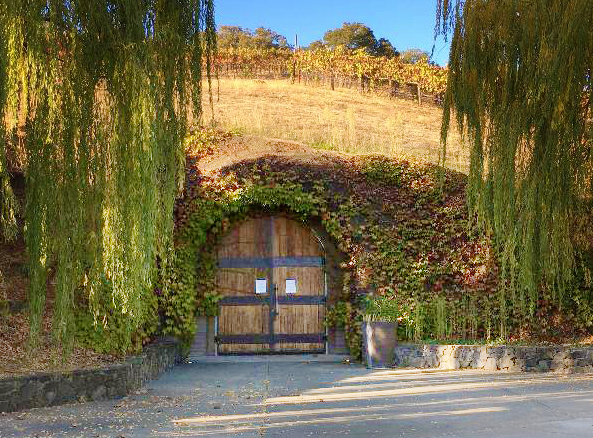 Winemaker Alex MacGregor has been with Mendocino’s Saracina since it started up, back when Dave Ramey was consulting with them. And to hear him tell it (from a media samples live Zoom tasting I attended with him and current Saracina owner Marc Taub), he’s not planning on leaving their 250 acre ranch anytime soon.

Born in Toronto, MacGregor caught the wine bug while working in the restaurant business and being influenced by Master Sommeliers he encountered along the way, eventually moving to California in 1989 and finding himself in the winemaking scene in Sonoma’s Dry Creek Valley. According to him, however, Mendocino is home. “We’re more like the Napa Valley 20-30 years ago: a surfeit of multi-generation, small farms,” he mused. “We’re rugged, there’s a rusticity to it that I love. We’re renegades up here. There’s a little bit more of a ‘Wild West’ mentality here.”

As for Saracina itself, both MacGregor and Taub seemed… besotted. As Taub reminisced, “About eight years ago we started making some wine in California. We were working in various custom crush facilities, and we decided we needed a home base. When we found Saracina, we found a beautiful ranch that was more reminiscent of what we’d seen all over Europe. The wines, I think, speak for themselves.”

Saracina does seem to benefit from some excellent geographical placement “We’re inland, so we’re in the Russian River corridor. It’s warm, but we have a huge diurnal shift. We can have 50F, especially in the months of September and October. People talk about ‘warm days & cool night’ and it’s usually just a bunch of BS, but it’s legitimate here,” MacGregor noted. As you’ll see below, that favorable locale translates into some tasty sipping, particularly for bargain-hunting vino lovers…

One of the first wines that Saracina made, they now have a decent amount of experience built up with this variety in Mendocino. Sourced from Lolonis vineyards, primarily, which according to them is some of the oldest Sauvignon planted in the U.S. (dating back to 1942). The site is dry farmed: “it’s a labor of love. This vineyard yields a tone and half an acre, in a good year! You could land a small Cesna down the middle of these rows. All the early material came from Sauternes,” MacGregor explained. This is definitely a California Sauvignon, but it has deep, wild element to it, with an austerity mixed among its bold fruit – the kind of depth that you expect find in wines with “To Kalon” on the label. Melons, abound, with hay, a peppery/herbal note, lemongrass, and white flowers. Snappy and crisp, but the citrus fruit flavors also have breadth. In short, this is downright impressive, especially for the price. Fermented in 25-30+ year old barrels (with battonage to add some softness).

This white is fermented entirely in stainless steel, with no malolactic, as they were going for what MacGregor  termed a “true expression of Chardonnay. In 2010, the wine took off. It was totally a fluke.” Elegant notes of white flowers kick things off, with white peaches, lemons, pears, and yellow apples following in step, ending with a slight tropical fruit note. The stone fruits continue in the mouth, with impressive length and vivacity, moving to greener apples and limes. It’s nervy, delicious, and lovely.

MacGregor refers to this 50% estate red as a “Mendo Blendo; a wine that’s by design, more rustic.” Blue and black fruits define it, with interesting spice and violet notes. It’s juicy, with plenty of fruit-forward oomph, but it’s not sacrificing freshness or structure. An older vine blend of Zinfandel, Petite Sirah, Malbec, and (one of my personal faves) old vine Carignan. This is deliciously fun to drink (and would be killer with burgers).

This all-estate red isn’t as morbidly named as you might think – the moniker comes from the gravelly clay loam source vineyard, which contains skids on the property that were used to drag lumber for nearby hop kilns. “What we got was fruit that was insanely expensive to farm, but had great concentration,” MacGregor noted. Blueberry compote, sweet tobacco spice, tons of savory notes – it’s Malbec, alright, but it feels almost airy for this variety. There is ample freshness, tons of juicy red fruitiness, and tannins that are well tamed (courtesy of a thinner-skinned grape clone).

This red is a blended of fruit from the Casa Verde (planted in 1944), and Niemi vineyards. A true old vine field blend that MacGregor explained was “picked in near freezing temperatures.” Casa Verde vineyard was “resuscitated” – and its now waist-height bush-trained, dry farmed vines are now certified organic. The mixture is mostly Carignan and Grenache (augmented by other varieties) that are all co-fermented. “It comes in with white wine chemistry,” MacGregor  mused, “and red wine color. It’s crunchy!” It’s also mineral, with lovely red fruits and dried herb spice aromas. The acidity is absolutely banging, no doubt about it. Cherries, pomegranate, meatiness, black and white pepper… it’s got a wonderful Old World feel to it (think great Italian Dolcetto).