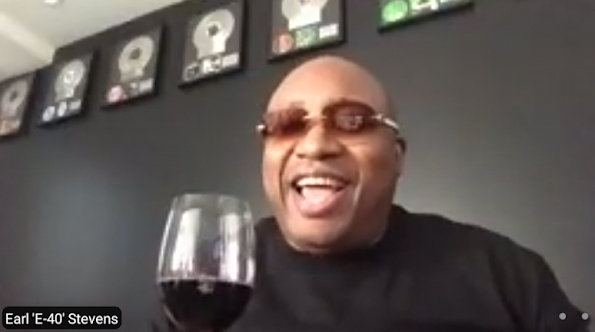 I could hardly keep up with his quips during a peripatetic (and yes, this is actually me saying that about someone else), entertainingly hilarious, and all-around eye-opening Zoom tasting of a handful of samples from his Earl Stevens Selections lineup.

“Everybody’s on an Easter egg hunt for my products.”

It’s a constant stream from this particularly prolific Hip Hop artist. Which shouldn’t have come as a surprise, I suppose, given how many entrepreneurial endeavors Stevens is up to at the moment. Aside from his own career in rap, there are his recent foray into alcoholic beverages of all stripes (including wines, sparklers, tequila, beer, bourbon, and gin), his own record company, and a planned venture into food (dubbed “The Goon with the Spoon”) that includes jerky and sausages, burritos, and ice cream.

Stevens, for his part, admirably sees little difference between all of these seemingly unrelated projects – he just wants to make them all successful (as he put it, “same hustle, different product”).

As for getting into wine and alcohol, Stevens sees it as a natural marriage of his personal history, his head for business opportunities, and his appreciation of the good life. for starters, he’s originally from Vallejo (“that’s my soil, man; it’s right there next to Napa, it’s only natural that I’d make wine”). And his love of wine started early, if a bit humbly. “I used to drink the shit out of jugs of Carlo Rossi,” he mentioned. “I used to sneak into my mom’s wine when I was younger. It just became the drink of my choice. People would be like ‘you got money, man, why you bringing Carlo Rossi and payin’ corkage fees at Ruth’s Chris?!?'”

His E-40 moniker is conspicuously absent from many of his products, and that’s by design. “I didn’t even want people to know I was a rapper, you feel me?” he explained. “I wanted people to whisper about it: ‘What’s that? man, that shit’s good… you know that’s Earl Stevens, right? That’s E-40!!'” But Stevens does have his family name on the wine selections, and so insists that it’s his call as to whether or not a product makes the cut for the lineup, employing blind tastings with his family and friends to determine what gets included.

So… let’s see if his boozy wares are Thirsty worthy, shall we?

A brand new release, with a rosé version also in the works. Stevens cut right to it on the origins of this bubbly: “I feel like it’s an untapped property in my culture. I’m like ‘shit, I might as well do something different than most people in my culture would do. Let me get up in this Prosecco!’ I was gonna do a Champagne, but I was like, ‘let’s do that later.’ I cut all the checks, and I chose to do it this way.” Floral, with tropical fruit, peaches, and white grape aromas, this sipper is easy-going, with an almost effortlessly drinking palate full of citrus and pear flavors.

“Strong but it’s good. It gets you drivin’ in the middle lane,” Stevens remarked about this red blend. Juicy, big, smooth, and oaky, it’s going to make a lot of friends, especially at this price point. This one’s obviously going after the entry-level fine wine red blend category, and will do well there because it’s way too easy to drink. Black and red fruits, sweet oak spices, lots of toast… you get the picture.

Verdict: Not a BB or a pellet gun (Nope), But a long barrel base drum (Yup)

A fun pun on the naming belies a fairly serious effort here in this un-aged Tequila, double-distilled by Casa Maestri in Jalisco. Open source agave is used (both highlands and lowlands), with stone ovens and pot stills. The nose is nicely balanced, with hints of clay and herbs, and wafting aromas of cane/agave. It sports a powerful palate, nice consistency, voluptuousness, and a clean feel. The long finish – with an almost licorice tinge – justifies the price. Nice on its own, and extremely solid

Verdict: You softer than a sock? (Nope), You solid as a rock? (Yup), Cleaner than a bar of Dove soap? (Yup)