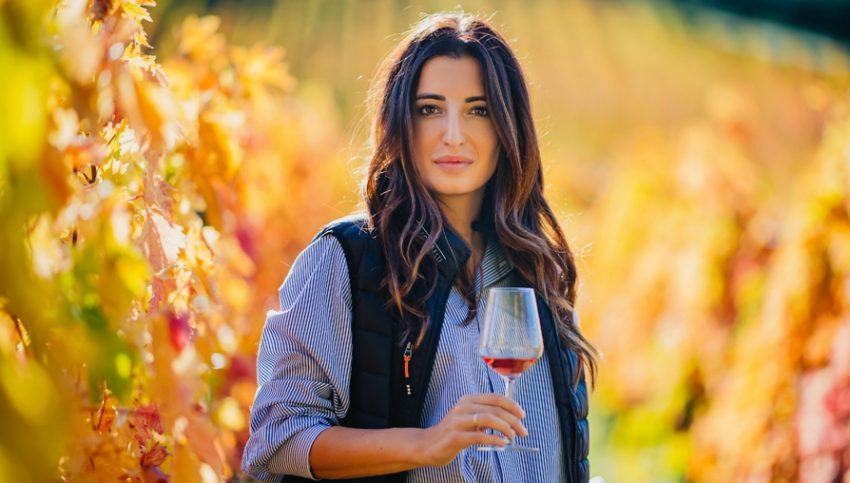 “I grew up in the winery. Literally.” Miriam Lee Masciarelli, Brand Ambassador for Masciarelli Tenute Agricole, was basically born into the wine business. She’s a second generation Masciarelli, which nowadays pretty much means being one of the faces for all of Abruzzo wine, despite the fact that her family’s winery sits in a province with a population of only about 800 people.

Masciarelli’s father, Gianni Masciarelli, is more-or-less credited with modernizing wine production in Abruzzo, and setting it on the path of competing in the quality wine market throughout Italy and the rest of the world – specifically by focusing on lower quantity and higher quality grapes. “My father, when he was 25, went to work as a picker in Champagne,” Masciarelli noted during (yet another!) live Zoom media samples tasting that I attended recently. “He decided to leave university and start this beautiful work. Forty years ago, it was not so trendy and cool to be a winemaker in this region! Everyone said ‘you are crazy!’ He changed everything completely here where we are.”

While the winery itself may be a mere 40 years old, the Masciarellis have been in the wine business for over a century. Their vineyards sit near the Adriatic coast, on the opposite side of Rome in central Italy. “One of the greenest portions of Italy,” Masciarelli explained, “the landscape is wild, but also the people!” The terroir is unique in that it’s near the mountains, but also within 15 minutes drive from the sea. “In the middle, we have a lot of hills and lakes.” If so inclined (ha ha!), you could ski there, with the sea still in view.

Regarding the fact that her family’s winery is now a bit of a regional wine icon, Masciarelli is pretty matter-of-fact: “our winery is not very fancy, not very cool, but it’s very functional. 90% of the work is in the vineyard.”

It’s good work if you can get it, as it turns out…

This excellent white is sourced from 2 specific vineyards, each about 40 years old, at altitudes ranging from 750 to 1,200 feet. The mostly calcareous clay and lime soils definitely do right by Trebbiano (and the sea breezes certainly don’t hurt in keeping ripeness in check). “It’s one of the longest-lived whites,” Masciarelli emphasized, “we do a lot of verticals, a few months ago we opened a `95, a `97.” Honey, lemon, peach, stone fruits, citrus, almond, white flowers, tropical fruits – it’s all textbook Trebbiano in the best ways. Lots of lovely complexity and headiness. The palate is downright superb: full of vivacity, bit also broad with its tropical and citrus flavors, and elegant structure. There is toastiness (courtesy of oak aging) and power (thanks to, well, Italy) on the finish, which has hints of grilled citrus, smoke and cedar notes.

Fruit is culled from four different estate plots for this red, all about 40 years old and at altitudes averaging about 400 meters, and it spends 12-18 months in first-passage French barriques. Dense and focused black cherry fruit, with minerals, and dried herbs mark the nose. Touches of tobacco leaf and leather make some supporting appearances, too. Red and black cherries abound on the palate, with plums, spice notes, and impressive power, depth, and freshness. Chewy, bold, and just FULL-ON. But the balance absolutely is there, and it’s especially food friendly for such a ‘big-boy’ styled wine. It would rock with basically anything from the BBQ. “We’re looking for elegance, but also with… personality, with structure.” Masciarelli noted.

A single-vineyard red, with vines located in the province of Teramo at an altitude of approximately 2,400 feet, trained in pergola as well as high density spur cordon and single guyot (because you were just dying to know all that, right?), and all hand-harvested. The name means “Spark” in Slovenian (in dedication to her mother, who is Serbian-Croation and from a cooperage family). Montepulciano. Closer to the coast, and with sandier soils (vs. clay in the south), this more northern Abruzzo vineyard produces a meatier, darker, riper, spicier, and more aromatic red than the Marina. Stewed black plums, blackberry compote, leather, dried herbs, cigar, and black cherries kick it all off, and everything carries over from the nose to the palate, with the addition of smoke, fine wood spices, along with power and heat. It’s burly, but it’s delicious. “The vintage was perfect,” reminisced Masciarelli. “We were used to sleep during the night! You should buy and keep it in your cellar!”

The Montepulciano fruit for this Riserva comes from the tiny Colle Cave vineyard in Chieti, which sits just above and behind the house of Gianni’s grandfather, where he first started making wine in 1930. It’s a steep-sloped site consisting of limestone, clay and gravel. “The quantity is very, very low” from each of the 40-year-old vines, Masciarelli explained. The name pays tribute to a family matriarch: “when he was 24, [my father’s] first winery was in his home. In Italy, we have a tradition to put the name of the grandmother on the house.”

Masciarelli isn’t shy about her opinions on this one: “My favorite wine! Since 2012 I’m in charge of this wine. I used to call this wine Highlander, because it seems very immortal to me.” Her focus became to make the wine more accessible earlier, while still maintaining its structure and ability to age in the bottle. This is interesting, since traditionally in this region of Italy, older wines were once viewed as being past prime. Masciarelli’s grandmother apparently was using older vintages of Haut Brion and other famous Bordeaux reds from the family cellar to make vinaigrette (according to Masciarelli, she would get some grief from her grandmother when trying to stop her from raiding the cellar – “it’s old! you can’t drink it!”).

Several different types of cherries and plums mix in the nose here, with tangy black raspberry action , savory notes, and dried herbs and tobacco leaf. The palate is dense, concentrated, leathery, spicy, complex, chewy and powerful. Just… BOOM! No quarter asked, and none provided. The stewed plums and spices carry on for minutes on the finish. Only recently imported to the U.S., and absolutely worth hunting down.