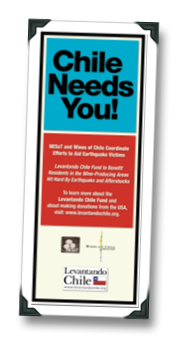 As most of you will already be aware, Chile is now in recovery mode from a major natural disaster, and this has hit the wine industry directly.  To help in the disaster relief, Wines of Chile has recently joined forces with NESsT to promote Levantando Chile, a fund that will benefit Chilean winery workers and their families who have been affected by the recent earthquake.  From the press release:

“’We were initially relieved that our co-workers and friends in Chile were not harmed, but there is a huge need for relief aid with many towns and villages completely wiped out,’ notes Lori Tieszen, Executive Director for Wines of Chile USA.

People wishing to help are encouraged to donate to NESsT’s "Levantando Chile: Wines of Chile Fund," established to specifically go in support of winery workers and their families, which was set up in the aftermath of Chile’s devastating earthquake. WoC and NESsT will channel funds to on-the-ground Chilean organizations working in the affected communities. The focus will be placed on providing support to vineyard and winery workers to rebuild their lives, homes and livelihoods.”

Donations to Levantando Chile can be made on-line.

Get Yourself A Trip To Chile

Finally, on a (tangentially) related topic, the excellently wine-geeky magazine Sommelier Journal and Wines of Chile will be running a contest this year in which one person can win a spot on the Wines of Chile Sommelier Immersion trip in the spring of 2011 (bear in mind that buying and promoting Chilean wine is actually one of the things that Wines of Chile and the Chilean government have cited as a means to help Chile recover from the damage done to the country’s wine industry by the recent earthquake – which isn’t to say that you should promote any old plonk just because it’s from Chile, but is to say that my inclusion of the contest here seemed to make sense to me).  Here’s the press release skinny on the contest:

“The contest will take place on the forums at www.sommelierjournal.com. Beginning April 1 and ending Dec. 31, anyone who creates an account can join the contest simply by participating in the forums. This can take any form within the forum rules: tasting notes, views of news events, great deals on wine, philosophical wine discussions—anything that helps advance the knowledge and experience of the other forum members. Participants do not have to subscribe to Sommelier Journal to create an account and post in the forum. At the end of the contest, the community members themselves will be given two weeks to nominate the best participants over this time period. A committee will then determine the final nominees, and the community will vote. The winner will receive a coveted spot on Wines of Chile USA’s Sommelier Immersion program in the spring of 2011.”

3 thoughts on “Wine Gives Back: Relief for Haiti and Chilean Wine Workers”