Before Plumboo (the purple monkey) I get started on our contribution to Wine Blogging Wednesday #53, this month hosted over at Twisted Oak’s El Bloggo Torcido, I should note that we don’t necessarily condone the consumption of alcoholic beverages before 10 AM.

But the theme this month is “Wine For Breakfast” (they don’t called it Twisted Oak for nuthin’!), and we certainly don’t discourage early AM alcohol consumption – we just don’t find ourselves doing it unless we haven’t yet gotten to bed from the nightbefore, if you catch my drift.

The real twist on this WBW is that the only eligible contributions are dry white or red wines. This eliminates pretty much all of the “standard” brunch picks (rose, bubbly, mixed wine concoctions).

Plumboo and I are totally undaunted, however. That’s because we know a secret about a fruity, expressive, food-friendly, and (importantly) inexpensive wine. Sounds like near-perfect late morning fare, eh? Did I just say “eh”? I’m not even Canadian… 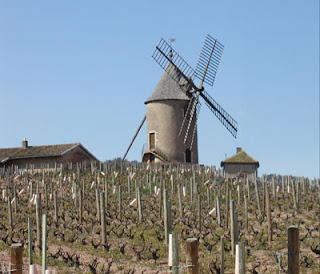 Anyway, our little secret is the other dry red wine of Burgundy: Cru Beaujolais.

Note that we are not talking about the popular but much-maligned Beaujolais Nouveau, which is released in the Fall and is meant to be quaffed up while very, very young. We are talking instead about the cream of the Beaujolais crop, which can produce suprisingly age-worthy and downright elegant wines.

Some background: Romans probably first planted grapes in the Beaujolais region, just outside of Burgundy, but “modern” Beaujolais wine probably began in the late 14th Century when Phillipe the Bold, obviously a big Pinot Noir fan, outlawed the Gamay grape from being planted in Burgundy proper; Beaujolais, as far as a place to cultivate wine from Gamay, was thus born (though the Appleations weren’t official until the 1930s).

Beaujolais itself dwarfs any single Burgundy district in size, with more than 50,000 acres of vines. The best sites sit atop granite, schist, and limestone soils on hillsides, and these constitute the Cru Beaujolais, of which there are ten areas, most with their own distinctive wine characteristics. Who knew Beaujolais could get so complicated, eh? (damn, I did it again…).

My favorite Cru Beaujolais wines come from the neighboring areas of Fleurie and Moulin-à-Vent:

So there you have it – dry wine to brunch by from an area outside of Burgun-dy. Just try to avoid bathing in it, as some of the Chinese appear to enjoy based on the pic below. Who’d a thunk that, eh? 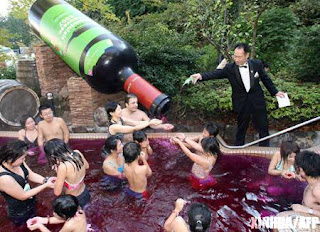 For more on Cru Beaujolais, check out the books Wine, The Wine Bible, Sotheby’s Wine Encyclopedia, and the World Atlas of Wine.