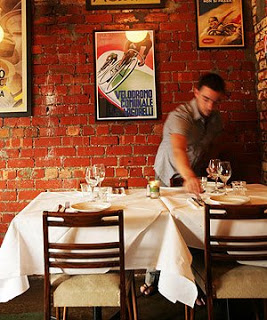 I recently received an e-mail response from a 1WineDude.com subscriber, in reaction to the previous post Does Wine Taste Better When You’re Dining Out? This response got me thinking about restaurant wine service in general, and it struck a cord in me because it touches on one of my pet peeves about wine service in many restaurants:

“…one thing I can control at home is proper rinsing and drying of my stemware. Nothing gets my goat more than shelling out good money for a favorite wine only to find that the restaurant’s stemware still smells of soap or rinsing/sheeting agents. If you encounter this problem when out on the town, don’t feel embarrassed to ask the server to have the glasses rinsed and hand dried again when having a special wine.”

Sound advice indeed, and I couldn’t agree more with it. For most wines, having a tulip-shaped glass is about all you need to get the maximum enjoyment out of the wine. Picking the right kind of stemware when drinking a special wine can really enhance the aromas and flavors. But I’d rather have a clean glass of any shape vs. a perfectly-matched but smelly glass!

Generally speaking, a little bit of wine knowledge can go a long way in making customers happy. Another pet peeve of mine when it comes to wine service: “the over-pour.” Filling a wine glass to the brim makes it almost impossible to enjoy all the aromas of a wine. It’s like eating a steak with a napkin draped over it. And just try to swirl the wine without spilling it…

Since we’re into complaining mode here, I’ll offer another one: serving wine at the wrong temperature. I’m not too precious about this – I just want it close. I’d rather have it too cold, because I easily enough warm the glass up in my hands (unless it’s been overpoured!). But getting a really, really cold red or a hot white is a total dining experience buzzkill for me.

Those are my wine service pet peeves. How about yours?