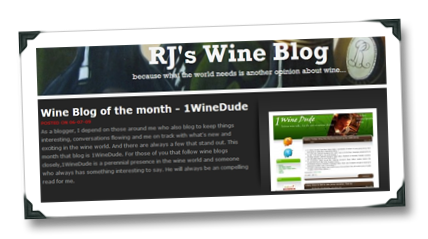 Things are coming up ‘Dude’ in the month of June!

Friend of the Dude RJ has listed 1WineDude.com as it’s Wine Blog of the Month over at RJ’s Wine Blog! Here’s what RJ had to say about selecting the blog:

“1WineDude is a perennial presence in the wine world and someone who always has something interesting to say. He will always be an compelling read…”

I’m really stoked, grateful and very humbled to have made the cut.  Thanks, RJ!

In other news, apparently I totally own the future of wine criticism, according to Wine Enthusiast editor and Friend of the Dude Steve Heimoff.  Yesterday, Steve indulged in a bit of crystal ball prophesying titled “It could happen…”, in which he proposes a witty future in 2030 (when I’ll be… well, a lot older than I am now) where I am the galaxy’s most influential human wine critic (and in battle against 2030’s version of today’s wine bloggers, who are androids):

“Roberts, widely acknowledged as the most influential wine critic on Earth, the Moon and Mars, found himself in the crosshairs at the recent winebot conference, held in the Hubble Hotel some 600 miles in space.”

It’s a funny read and a much-needed break from some of the “heavier sh*t” going down in the wine world recently (like failing businesses, embattled critics, plummeting journalist revenue…).

11 thoughts on “Wine Blog of the Month (Also, I Rule the Future of Wine Criticism! WTF?)”