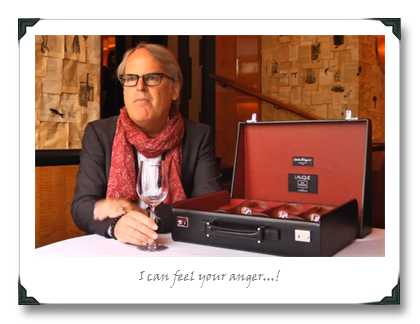 Wine geeks and wine pros are taking it on the chin right now (for a hilarious and totally NSFW example, have a listen to this podcast by Internet comedy icon Maddox). We are accused of just about everything uncool, from being fond of snobbery to displaying nepotism to having bullsh*t jobs to engaging in major douchebaggery.

The image problem, though, is understandable, particularly when we have things like the Lalique “100 Points” leather briefcase by James Suckling and Salvatore Ferragamo, available for $8500 USD. At least you get a couple of bottles of wine with it. Go ahead, watch the video on James’s website. And if you order one, do me a favor and unsubscribe from my blog, okay?

Fellow geeks, please make a good name for yourselves and other wine nerds by not carrying personal stemware around unless there’s a life-changing wine drinking experience expected that evening.

27 thoughts on “Why Everyone Hates Us”