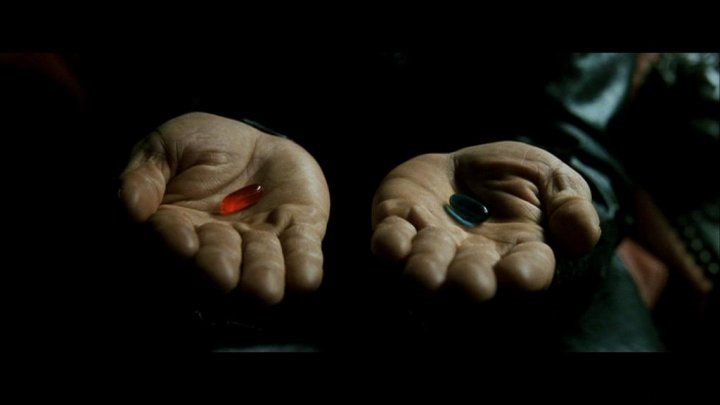 Several days ago, a lively discussion took place here in the comments on a post (okay, “rant”) that challenged wineries in emerging wine regions to focus on fewer, higher-quality bottlings, and not to pawn off poorly-made (or not-quite-ready-for-prime-time experimental) wines onto customers at their tasting rooms (a scenario which I’ve experienced first-hand). 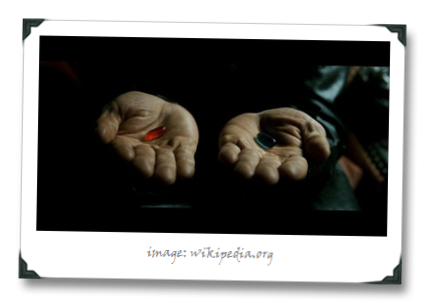 In those comments, frequent-visitor and formidable-wine-blogger-in-his-own-right Thomas Pellechia raised a couple of fascinating related questions, about which he, in turn, challenged me to write:

“…is there or should there be a relationship between what the wine ‘press’ prefers and what the wine ‘tourists’ buy? And who’s got the upper hand when it comes to establishing the success of a winery?”

Put another way, if critics say a wine really sucks, how relative of a measure is it?  Do people act on that assessment when it comes to buying wine?  And if they do, should they?  Could a winery still manage to pawn off its crappy stuff to newbie consumers in the tasting room, even if critics pan the bejeezus out of it?

Not easy questions to tackle.  In fact, they’re like trying to tackle Jerome Bettis in his heyday.  If I’d have had any clue just how deep a rabbit hole I’d be diving into after promising Thom I’d take on the topic, I would have told him (politely) to get bent and stop leaving such profound comments on my blog.

And this rabbit hole goes pretty deep, boy.  What I found in my quick-and-dirty investigation reveals a lot about how we buy wine, calls into question the future relevance of wine criticism generally (including my own modest contribution to that sphere), and tells us why it still might be possible for wineries to close many a tasting room sale on their crappiest offerings.

So take the red pill, if you dare, and I’ll show you just how deep the rabbit-hole goes…

It all began innocently enough.  Spurred by Thom’s probing questions, I posed the following simultaneously to my friends on twitter and Facebook:

“Who influences your wine purchases the most? A friend? Critic? Guy/Gal working at the wine shop?”

The results are at the bottom of this (rather lengthy – hey, I warned you) post.  For the impatient, the concept of friends and wine store staff were mentioned… a lot. Critics and bloggers? Uhmmm… not so much.  The people hath spoken, and they doth listen to friends and wine store clerks most of all. Not a scientific or statistically-relevant study, for sure, but an interesting result nonetheless.

But I couldn’t just let it go, of course, partly because the answers meant that I wasn’t so relevant even to my friends for f*ck’s sake! I mean, I want 1WD readers to up their own personal wine IQ and all but jeezuz, people!  And so I started wondering… are there statistically-relevant findings that might back up my shot-from-the-hip social media results? One thing led to another led to some Google searches, and as it turns out, a few bits of research have been done recently on the influence of wine criticism – and they bear similar results.

The first bit of research is a 2007 Wine Opinions study titled “Tracking wine media usage and the Influence of Critics” which was quoted and analyzed in June of the same year by Steve Bachmann, CEO at Vinfolio.  Steve commented on a few of the report’s highlights (emphasis mine):

– The most influential opinions affecting consumer retail wine purchases over $20 (the highest category) were “wine-knowledgeable friends” (72%) followed by retail staff (61%).

– 24% of consumers in the panel read wine blogs, about double the level which read the Wine Advocate or eRobertparker.com.

– 87% of consumer respondents agreed with the statement “I trust my own taste more than I do the wine critics.”  Despite that, 49% agreed that “I try hard to avoid wines with poor ratings.”

One interpretation (cannot stress enough that it’s one of many possible, but I think it’s valid) of these results is this:

People want to trust their own judgment when it come to buying wine, but (understandably, given the incredible volume of long-tail SKUs out there) realize they could get burned and want to minimize the scorching, particularly on higher-priced (>$20) purchases.  Therefore, they look for knowledgeable advice before dropping their coin on the bottle. The advice comes increasingly from those that they consider friends (a group which can include people with whom they have only ever had an on-line relationship), but could be trumped by the advice of staff at the point of sale.

I like this interpretation because in it I’m actually still relevant.  Sort of.  I think.  Anyway…

In 2010, a similar (smaller) survey was conducted by Paul Rickett at a retail wine store in Canada, and yielded similar results.  While the sample size is small, the findings are interesting for our little rabbit-hole journey in that the respondents also cite friends and trusted staff as having the highest influence on wine sales decisions (though in this case, those two were reversed, with the staff coming in at #1 and friends at #2 – press, including bloggers, all came in dead last).

Hmm… ok… this one I liked a hell of a lot less – not exactly a high 1WD relevancy factor there.

Then, a moment of clarity (or was it hopeful desperation?): I’m not sure I’d be hanging my favorite Steelers hat too firmly on conclusions drawn from either survey, as there are almost a countless number of factors at play in a wine buying decision (why and for whom is the wine being purchased…? what’s the comfort level of the purchaser…? did they remember to take their Geritol that day…? and what led them to buy wine that day anyway, maybe – please god –  a 1WD post…?).  BUT… it seems logical to state that trust is an important factor in influencing buying decisions – wine is apparently no exception – and that our circle of trusted sources is getting increasingly personal. 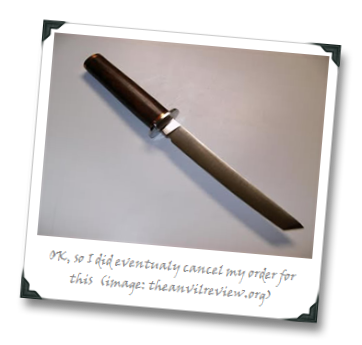 So maybe there’s a place for us after all, so long as we resonate with people on a personal level?  In the words of kick-ass `80s supergroup Asia, “only time will tell.” I like my odds in that vino worldview.  So I cancelled the Amazon.com order for that Sepaku knife.

What really got me out of the darkest, sunless areas of the rabbit-hole was this:

The most knowledgeable and/or confident of wine consumers are probably gonna buy what they like to drink no matter what the critics say about it.  Having said that, for those influenced by the recommendations of friends (and that’s a big majority of those polled in Wine Opinions study), they might steer clear of what their buddies say tastes like crap even if their own wine-buying confidence is relatively high.  The trick for someone like me is to be a valuable wine buddy for as many people as possible without trying to be a wine buddy for every possible person. I happen to love doing that, so it’s an exciting prospect.

So, coming full, rambling circle out of our rabbit-hole and back to Thom’s questions: should there be a relationship between what the wine ‘press’ prefers and what the wine people buy?

I think the answer is “Yes,” but only if you substitute ‘press’ for ‘trusted sources’  – the ‘press’ needs to be someone whose opinion matters personally to the person plunking down their hard-earned cash for a wine.

As for who has the upper-hand when it comes to establishing the success of a winery, one could make a strong argument that the answer is “the last person to touch the bottle before it gets into a consumer’s hands.”

I don’t mean to drop a wet blanket soaked with nasty-smelling reduced vino on our proceedings here, but some wineries are, in fact, gonna try to pawn their crap wines off in the tasting room, and the data above suggests that they’ll get away with it – if they can influence the purchase.  Now, if the buyer genuinely likes the taste of that wine, then my (strong) opinion is that they should go for it, buy a case, and not worry about what I or anyone else says about how bad the wine is.  But if the wine is noticeably flawed, I would question that buyer’s taste, or at least encourage them to try more wines originating from more locations to get a sense of the larger wine world; if they still want to buy the nasty stuff after that, then that’s their call, but at least it will then be an informed call.

Twitter and Facebook answers to “who influences your wine purchases the most? A friend? Critic? Guy/Gal working at the wine shop?”

meganmarconyak wine shop peeps and in-store tastings influence me most!

Anastasialiv For my part, mostly friends when I don’t follow any curiosity of mine!

m_despoina Besides my own taste, friends mostly

NINhilista Primarily the guys at “my” wine shop, as well as a few somm/server friends.

wolfeswines Yeah! RT @1WineDude: Curious – who influences your wine purchases the most? A friend? Critic? Guy/Gal working at the wine shop?

Vembra Holnagel Friends who have good taste and wine shop folks if they demonstrate a real knowledge and not just trying to sell the overstock.

Bob McClenahan If less than $30, I’ll take advice of wine shop. If over, then I’ll have to try it first.

Markus Stolz Pure curiosity. Also love talking to the wine shop folks, more often than not they are extremely insightful.

Cara Leyba Friends & anyone who can talk to me in wine language. I start drifting off into my happy place and just listen and hand over my credit card willingly :)

Christine Eitel Komons If I walk into an unfamiliar wine shop and wish to browse/impulse buy on my own, one trick I use is to look at the name of the importer on the label. If it’s an importer whose taste I agree with, like Jorge Ordonez in the Spanish section or Kermit Lynch in the French section, I know I’ve got a solid bottle in my hands.

Meredith Miles People that have the same taste as me. A lot of times, for me, even the local wine shops don’t cut it

Pamela Wilson-Hale For me… it’s YOU Joe!!! (and my taste buds that just love the German Resilings)

38 thoughts on “Who Has The Most Influence On The Wines That We Buy?”