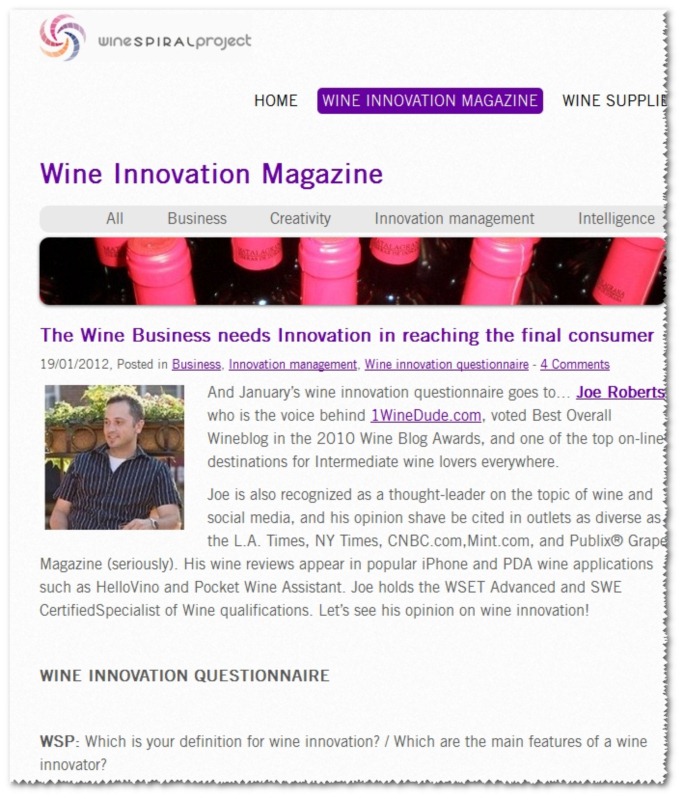 I was recently interviewed by WineSpiralProject.com, as part of their series on wine industry innovation, in which they interview personalities in the wine world and ask them to share thoughts on the wine biz and how it can/should innovate.

Yeah, I know, I’m not 100% certain why they picked me either, but what’s done is done so let’s just roll with it, okay?

You can check out the entire series of interviews at this link; I’ll give the the super-short, edited-down-to-the-bare-bones-Cliff-Notes version of my interview right here:

It’s not in bottling lines or fermentation vessels that we need an innovation push in the wine biz; we need innovation in adjusting the attitude that most wine producers have towards consumers. What do I mean by “engagement innovation?” Short answer: using the single most innovative outreach platform ever developed in the history of the human race – the Internet – to directly engage the people who buy their shiz. This may sound like common sense to you, but a lot of the producers I encounter seem to need reminding that those consumers – and not critics – are the ones who matter the most…

Yes, critics have reach. They can and do expose wine brands to markets that otherwise might not know they’d exist. But if I were a small-production winery, I’d be worrying a hell of a lot more about how to reach, engage, and keep customers I had (as well as engaging new ones) than trying to get a crazy-good review with critics that have substantial followings in the hopes that those followings will buy up every last drop, allowing them to quintuple prices and retire in the outer Hebrides.

Because that scenario is about as likely as Bon Jovi opening for my band on a world tour. In other words, for most producers it’s a total waste of time. And I am saying this as, in part, a wine critic – because after people do you the honor of following your thoughts about wine, and publicly declare on social media platforms that they are going to buy or avoid a wine that you write about because of what you said – or didn’t say – about it, then for all intents and purposes you are now a wine critic (at least, to them!).

But engaging customers and turning them into potential life-long fans of your brand? That’s happening every few seconds every day on social media platforms. To quote, well, myself from the interview (emphasis provided as published by WineSpiralProject.com):

“Wineries have the ability, through social media, to reach younger wine consumers directly and be just as influential on their buying decisions as Wine Spectator, Robert Parker, or little ol’ me. That is an amazing opportunity and those that do it right are gonna beat the pants off of those who don’t in the marketplace eventually. It takes time, and a long-term view because the influence is done via one-on-one relationships – patience is going to pay off in that case!”

That’s why I think it qualifies as “innovation” (sorry the rationale is coming so late, for those who have been waiting for it): because it’s nearly the opposite approach as compared to what most wine producers are doing in (not) reaching out to their customers right now.

Honestly, I’ve got no idea what producers (especially smaller wine producers) are waiting for when it comes to outreach. Well, aside from fear of the unknown, I mean. In my view, they should stop wasting time complaining about social media and just start using that time on social media to connect with customers already.

That’s sure-as-sh*t what I’d be doing if I made wine right now.

39 thoughts on “Where Can Wineries Really Innovate? In Engaging The People Who Actually Drink The Stuff!3 min read”