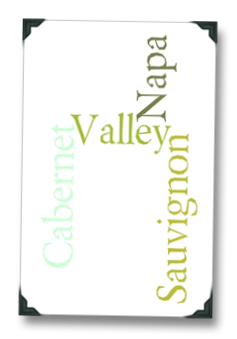 Today I’ll be starting my week-long Napa excursion (the itinerary of which I’d hoped to have posted today, but since all those West Coast hippies are so damn laid back, as of the time of this writing my schedule still isn’t totally finalized… if I’d been dealing with uptight, anally-retentive East Coast types I would have had this all nailed down within 15 minute intervals weeks ago).

This got me thinking about Napa Cabernet, of which I plan to have tasted so much by the time I leave Napa that I will probably need emergency dental work to deal with the teeth stains as soon as I land back in Philly.

And since I’m heading out there for a writers symposium, it got me thinking about the origin of “Napa Cabernet” – not in terms of the wine, but in terms of the words.  I’m a sucker for words and I own more than my fair share of dictionaries and etymological resources.  I’m geeky that way.

You’d think that this would be pretty easy, right?  A bit of Google searching, or a trip to the handy-dandy unabridged dictionary, and we’d be all set, right?  Surely there isn’t much to the origin of such words, the kind that are so nearly ubiquitous that they instantly call up various mental and sensory images for wine lovers worldwide, right?

Not so fast, Buck-O.  As it turns out, the etymology of both “Napa” and “Cabernet” is far from being etched indelibly in stone…

Surprisingly, no one is 100% sure of the origin of either Napa or Cabernet.

I had to go to a specialized resource for this one, namely Charles Hodgson’s excellent Wine Words.  According to Hodgson, when it comes to the word Napa, all of the sources he investigated for the word’s origin suggest a Native American word, but no one knows exactly what that word meant.

Napa is often cited as meaning “plenty” but without corroborating sources.  It may have meant “grizzly bear” (an apt descriptor for some overly-extracted Cab?) to the Patwin people, or “home,” “near mother” or “house” to the Suisun.  And while baptismal records dating back to the late 1700s cite Napa as a place, the first known mention of a connection to a Native American word comes from an early 1820s diary entry.

Cabernet is no more secure in its origins.  References to Cabernet appear in the late 1700s and early 1800s, but the spelling is inconsistent (cabrunet, carbonet, carbenet…), and French sources cite the etymology as unknown.  Hodgson offers a tantalizing (well, tantalizing to word gees like me, that is) clue of the word’s origins, however.

French has its roots in Latin of course, and carbon is Latin for “charcoal.”  Adding a “t” would make the word diminutive, so carbonet would give you “little coal.”  According to Hodgson:

“… with French’s Latin roots, plus the dark color of Cabernet Sauvignon and Cabernet Franc grapes, it’s easy to conceive that the the name could have evolved from carbon…”

There you have it – about as clear as the opaque juice that runs from those Napa Cabernet grapes!

None of this stuff prevents us from enjoying our Napa Cabernet, of course, though it does remind us just how little we can take for granted as known quantities in the wine world.